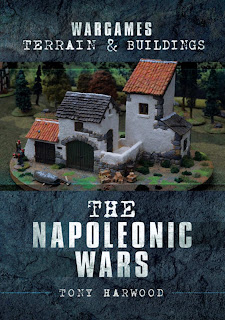 In this excellent and very useful new book from a series entitled Wargames Terrain & Buildings, experienced building/terrain modelmaker Tony Harwood shares his knowledge and expertise via a series of projects suitable for The Napoleonic Wars.

After a brief intro outlining his personal history, as both a wargamer and writer, and the pathway that lead him to publishing the book, in which we get a glimpse of some of the philosophies that inform his approach, there's an even briefer word about the paints he uses. Then we get to the real meat, nine buildings in three sections, as follows:

Whilst most if not all the techniques he uses are transferable to other scales/periods, and his methods, as he notes himself, aren't the only way to do things, almost all the builds are in the 28/30mm scale, with just one in 15mm, and one in 20mm. Sadly there's nothing at all in either 6mm or 10mm, the two scales I'm building my main Napoleonic armies in.

Harwood has a repertoire of techniques that have become his personal m.o. And this book sees many of these being repeated frequently. This is good in one way - they are obviously tried and tested methods - but occasionally makes for rather repetitive reading. He does seek to break up the potentially monotonous reiteration here and there, chiefly by deciding in a couple of projects to limit himself to mostly one material, as per the almost all card building (I forget offhand which this was), and nearly all foam built Peninsular diorama.

It's very interesting to hear, right at the outset, that he's become a building and terrain modeller first and foremost, followed by figure-painter, and lastly, wargamer. This mirrors my own predilections for the constructive phases over the final/finished gaming part. He also laments the tendency to stockpile unfinished stuff. I totally identify with and relate to both these 'confessions'! And likewise, whilst I'm not unduly bothered by the former, the latter is a constant worry.

One of the chief plus points, to my mind, about a book like this, in addition to the knowledge and skills one can learn about and hopefully pick up (reason enough in themselves for getting books such as this) is inspiration. This could be the desire to emulate a particular build project. Or, and more likely for me, the more general inspiration to: 1) give it a go, 2) see projects through to completion.

One area where I think the book could've been improved a little is about reference and sources. Several times Harwood mentions his inspirations, which range from other books on the same topic, to books or articles about particular architectural styles, things he's seen in films, and of course, these days, stuff found on the web. There are also even a few photos in which one catches a glimpse of these sources. Or there's the model he based on a Lilliput Lane creation.

A complete section devoted to the subject of research and design would've been great. He does allude often enough to these processes, and in fairness his target audience are probably, on the whole, already well-versed in such activity, as our hobbies demand it. Numerous of his sketches appear amongst the copious and very useful 'step by step' photo-series that illustrate each build project. One thing he does have, which too many specialist books omit, is a glossary. Well done!

My briefer Amazon UK reviews says much the same as what I've said here, thus far. But this being my blog, I can now indulge in a more detailed dissection!

Firstly, here are some of the things I like best about this book. For starters, there are the projects themselves. They are all great little models. Tony is clearly a skilled and accomplished modeller. And it's fantastic to have in a compact and thoroughly well illustrated form, a distillation of all his many years of practice in his art. And then there's the period specific aspect. Again, very useful, and perfect for me, as I'm building several Napoleonic armies.

Harwood also addresses everything from the completely scratch-built (most of them!), to the modification of commercially available products. The latter exemplified by his extensive reworking of a Sarissa laser-cut MDF kit of La Belle Alliance (the lone 20mm project). Like Tony, I find these MDF products, aside from being too costly for my meagre means, unappealing, on account of being too boxily flat and square. With the exception of his Hungarian church, all the projects here are delightfully irregular and wonky, which gives more character and looks more realistic.

Another plus point is the 'scavenger gourmet' aspect, re materials. A large portion of what he uses, from card, through foam, to wood and even plastic-card, is sourced from 'junk', for free! Way to go. Our hobbies are expensive enough, and getting more so all the time. For some lucky folk this may not be an issue. But for me budget is a massive potential stumbling block. So I'm grateful to Harwood for reminding me that I can build great models using freely acquired materials.

I also feel that simply by reading this I've begun acquiring new skills. Of course the proof of this pudding is in the building. And I intend to get into that ASAP. I may even make a start on something today? Numerous of Harwood's basic methods are not what I was expecting. For example the building up of layered corrugated card profiles into a solid block, which is then more or less papier-mâchéd with newspaper. And I haven't used DAS modelling clay, ever. Not even back when I was a kid. I'll be buying and trying that.

His techniques for creating wooden features seem heavily reliant on various types of foam. Again, not what I was expecting, and a useful new avenue to explore. Despite further definitions of this material in the glossary, I'm still not entirely sure exactly what type of foam he's using. So, something to be explored there. The same goes for his methods of working this material, by sculpting it and texturing it, etc.

Now onto a few criticisms. And before going any further please note that these are purely my own personal reflections, intended as (pardon the inevitable pun) constructive criticism, and with due acknowledgement of the authors' greater expertise/experience and my own absence of same! Some of these are about the editorial mechanics of the book: some pictures could've easily been improved with a little colour/contrast tweaking in Photoshop, for example; occasionally photos appear to be nigh-on identical, i.e. possibly redundant.

Another vein of critique involves modelmaking conventions. So, whilst I admire Harwood's methods overall, in particular how he renders walls and roofs, I'm not as enamoured of his way of doing 'glazed' windows, with blue and white dots, or his preferred choices of earth colour and 'grass' materials on his bases.

And whilst the idea might seem good, I think the way he did his stained glass windows on the otherwise fabulous Hungarian church, slightly mars an otherwise terrific model. I absolutely love stained-glass. And very early on in my love affair with it, I noted how, viewed from the exterior, it looks nothing like it does when viewed from the interior, on account of light being bounced back off it, rather than coming through it, as it does when viewed from inside.

Anyway, these very minor critical caveats aside, this is a terrific and very useful book, which I'm very pleased to have, and would unhesitatingly recommend.