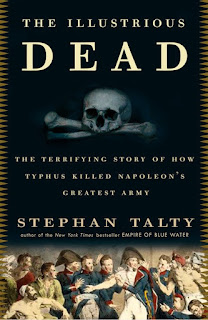 The Grande Armée, defeated by... a Microbe!?

According to this fascinating book it wasn't the Russians that defeated the largest army ever assembled, when Napoleon and HUS allies invaded Arissia in 1812. Nor even was it 'General Winter', as the tale is usually told. Sure, they played their parts. But, according to Stephen Talty, it was the Typhus microbe that really defeated Napoleon's forces in 1812.


Very enjoyable! There are vast numbers of books on Napoleonic history, and a good number of those are about Napoleon's fatal misadventure into Russia, which, it can be argued, marked both the high tide and the definitive end to his Imperial fortunes. One of the things I like about this situation of super abundance is that authors are frequently forced into choosing ever more specific corners of these epic conflicts, or new and different angles on them, in order to give their contribution to the crowded field any chance of gaining notice. 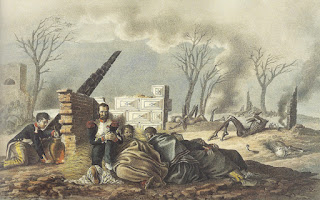 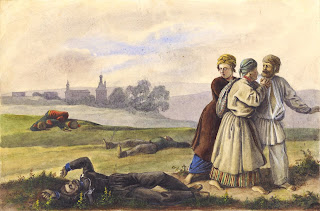 In another Faber du Faur illustration the cause of death is less clear, could thus be typhus?


Talty's book on the massive and much-covered 1812 campaign in Russia addresses the role Typhus played in the obliteration (decimation is too weak a term, the ratio of losses being closer 9:10 than 1:10) of the Grande Armée, the largest invasion force assembled since Xerxes legendarily large force.


Talty writes very well, and I love his book. I can imagine the more pedantic of Napoleonic buffs - a numerous species - picking apart some of his specifics, but I think he gets the important stuff, and in particular the bigger picture, exceedingly well. His harping on the theme of typhus could be potentially galling. But one can't deny it's role, nor, as the book goes on, wonder why more attention hasn't been devoted to this aspect of the campaign before. 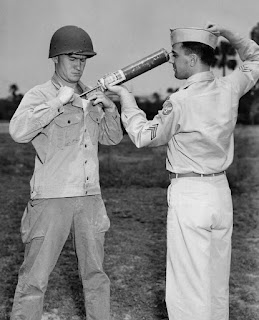 On first reading, when the jacket blurb suggests that herein Talty 'tells the story of a mighty ruler and a tiny microbe, antagonists whose struggle would shape the modern world', it might appear, to the seasoned reader of Napoleonic and 1812 literature, rather a ridiculous idea. But it isn't.


And for me, as someone who became a fairly avid reader of evolutionary literature, sparked by the fairly recent 200th and 150th anniversaries of Darwin's birth and the publication of On The Origin Of The Species, to suddenly read stuff about the ancient prehistory of the planet in a book about the Napoleonic wars was certainly unprecedented and... well, frankly, wonderful. 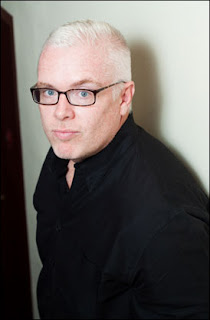 
I think Tolstoy would have applauded Talty's work, as it supports his view, as advanced in his masterwork, War & Peace, that so called 'Great Men' are in fact subject to forces both beyond their control and, as with Napoleon and his generation [2] and Typhus, beyond their comprehension.


Whilst traditional military history buffs might quibble with occasional details of uniform, formation or technology, I think many will find Talty's fluid and exciting narrative skills convincing. His descriptions of the actions at Smolensk and Borodino are amongst the clearest and most enjoyable (if, granted, not the most complete or detailed) I've read.


All in all, an excellent, enjoyable, quick and easy read, and a welcome plugging of a gap in our understanding of this much written about campaign, which succeeds in both finding a new and interesting angle of approach and retelling the familiar story in a vivid compelling manner.


[1] I jest! Actually this pic shows DDT being used to prevent typhus.


[2] Even the medical expert of the Grande Armée, Baron Larrey, was hopelessly off the mark when it came to pathogenic organisms. The enemy in this case wasn't hiding on the reverse slope, they were simply invisible.
Posted by Seb Palmer at 21:17