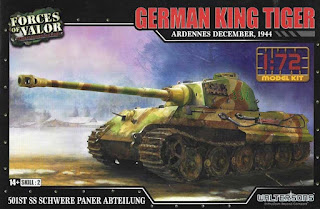 I bought this King Tiger kit, by Forces of Valor [sic*], a new brand to me, from the Ely model shop. Partly on account of it being quite cheap, and partly 'cause I want to build a King Tiger and paint it up in the unusual (one known/documented example, I believe?) octopus camo' scheme.

But I also wanted to have it in zimmerit, which the octopus King Tiger isn't. But hell, this is my model, and historical accuracy or authenticity isn't the be all and all. So, goddamnit, I'm going to have a bit of fun with some historical licence, and combine the two things I love in one King Tiger. 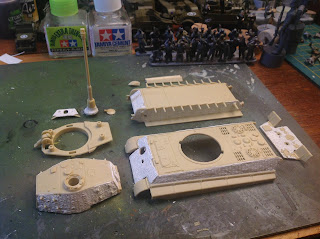 All the main bits zimmerit-ed.

The zimm' took bloomin' ages! We have a guest round, and we had a barbecue dinner out in the garden yesterday evening. With all that going on and the intense heat, even though I started on it about 3pm, I didn't finish till about 1.30 am this morning!

I do my zimmerit using white 'superfine' Milliput, which I spread as thinly as I can. In some places I try to work around detail, preserving the raised profiles of other details if poss'. In other locales - such as the sides of the hull in this instance - I'll remove surface details (tools and cable in this case).

Once the surfaces are covered in as thin a layer of Milliput as I can manage, I use a very small flathead screwdriver to form every single indentation of the zimmerit individually. It takes aeons, but I like the irregularity. I almost bought some PSC Panthers with zimmerit already on 'em, at the recent Other Partizan, but didn't because; 1) they are to pricey, 2) the zimmerit is just to uniform/regular. 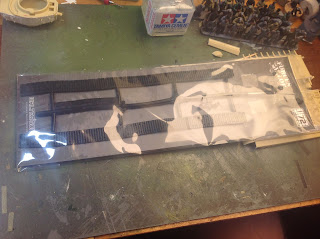 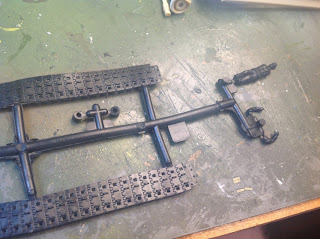 ... other bits? The commander and two'grommets'. 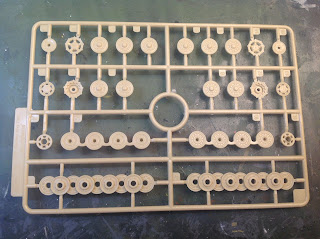 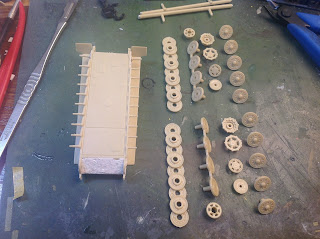 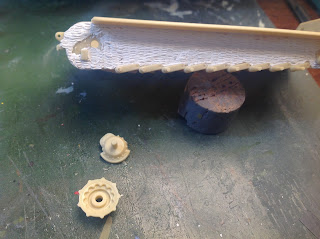 The running gear in this kit is very nicely designed and manufactured, being clean and crisp and going together easily and in good solid alignment. One excellent little detail is the way the two drive wheel mounting parts have different sized male/female gubbins. The tracks are some kind of stuff rubber/vinyl typed deal. A bugger to glue, alas. I used superglue, which got me there eventually.

Something I'd never seen before: a vinyl/rubber commander figure, and two grommets, or big fat washers. The latter are part of the turret/gun mount assembly. Without them the gun will just flop and flap around. Being on a different sprue, in a different material, there's a chance you might overlook them.. er, well... I did! 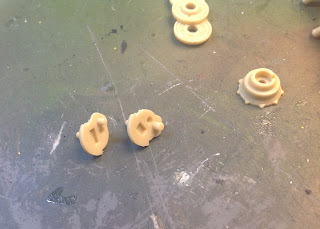 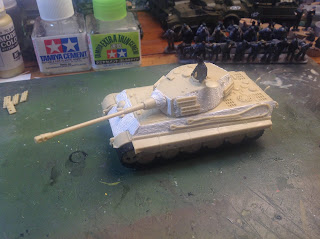 If I hadn't opted to do my DIY zimm', this'd've been a pretty quick and easy build. With the zimm' and one or two balls-ups, it's wound up being a bit of a marathon. But it's a nice model, and I'd heartily recommend it as a base-kit, for wargamers in particular. Is solid, looks great, and is fun to build.

With the kit more or less completely assembled, you can see where I've removed parts of the mudguards. With just a small missing segment near the front on the  left, and a larger central section on the right. I also added some battle damage, in the form of two shell penetrations, and some dings on the left 'fender'. 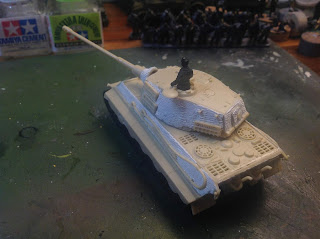 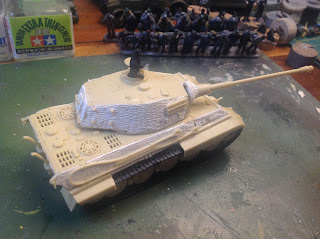 Here's the larger gap on the right side. 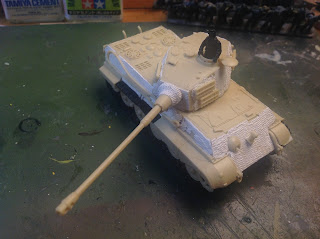 Still need to zimmy up the machine gun bulge.

At this point I added one or two tools, to replace those I'd removed before adding zimmerit to the hull. I chose not to use all the spare track on the turret, as I didn't want to cover up all the zimm', or for that matter, the camo'  (when I get round to it). And then it was undercoat time. I noted only afterwards that I still need to zimm the mg! 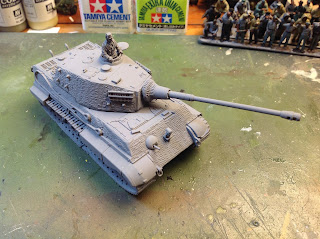 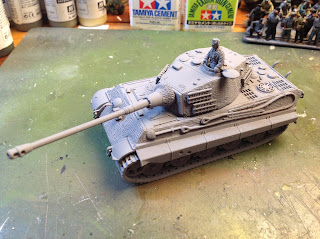 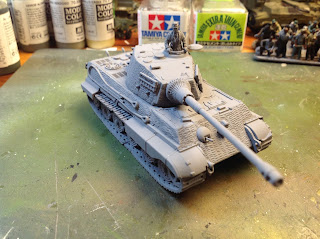 What a handsome beast! 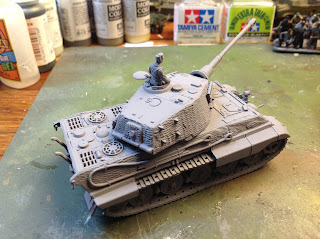 Lean? Hmmm... not sure. Mean? Most definitely. 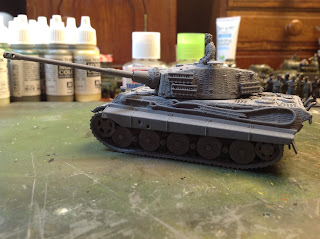 Next step? Paint the beast.

* American spelling, I'm guessing. But then they have '501st SS Schwere Paner Abteilung'! So maybe it is just a typo?
Posted by Seb Palmer at 22:52