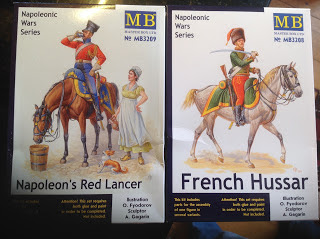 I originally purchased this kit some years ago, at Salute, 2016 (my first post on it can be read here). I built it some time later, and then later still I started painting it. It's only been thanks to the advent of the Airfix 54mm Napoleonic kits that Sean gave me recently, that I've gotten round to finishing it (near enough). 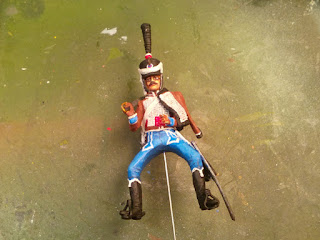 An image from slightly earlier in the whole painting process.

The above photo was one of the only ones I took of the earlier stages of blocking in colour. And even then by that point I'd started working on highlights and shading, as on his breeches. In this image you can see his face a bit better than in the latter pics. It didn't come out quite as nicely as the recent Airfix Old Guard Grenadier, I don't think. But it's good enough for me for now. I also think the general darkness around his eyes works quite well under the visor of his shako. 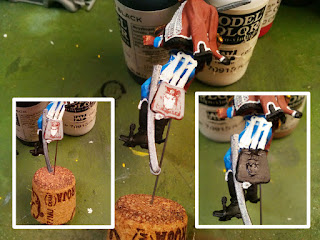 In the image above I'm converting the sabretache, which was a lovely floridly ornate thing. First I had to scrape of the textural detail and flatten it. Then I had to carve/sculpt the new and correct detail from the very thin plastic-card that's supplied for straps, etc. The image on the left of the above picture shows the shield and crown apple to the flattened 'tache, with the tiny eagle on the work mat, next to the cork. The central background image is the whole lot glued in situ. And the image on the right has had a lick of paint. The tiny eagle was still a bit too big. Or was the shield too small? Either way, I could've done a better job. But it was sufficiently had work to leave me not wanting to repeat the process from scratch! And I figured paint would help me out later anyway.

At this juncture I've finally mounted the figure on his trusty steed. Neither are 100% finished, but they're near enough for me to make a post on my progress, methinks. Working on the lace on his dolman and pelisse was another of the very painstaking processes, with much to-ing and fro-ing, painting and retouching. 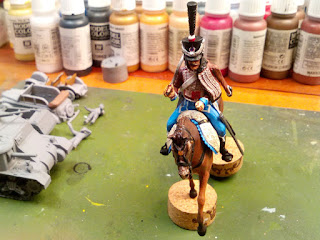 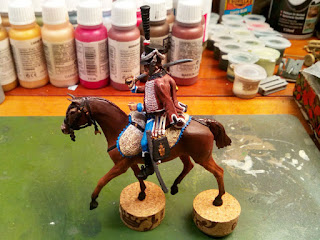 In these images you can see how the sabretache came out once painted. I'm simultaneously pleased and still a little disappointed. I think the shield should've been a tad larger, and the whole array a title higher/more central on the overall leathern pouch. Still, he does at least now have what I believe to be the correct sabretache, according to my researches in such sources as the Funckens, Vernet, Rousselot, et al. 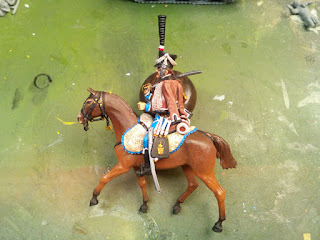 The colours are described in Funcken as Sky Blue and Chestnut Brown. I actually used Vallejo Mahogany Brown for the chestnut colour, and my own custom mix for the blue, using approx' 50/50 (?) and Ivory. The highlights and shading were achieved using Vallejo Black to darken the colours, and Ivory to lighten, with a drop of (?) in the chestnut, to keep it nutty and warm. The colure in the pictures in this post are rather more vivd than normal, as they're taken on my wife's Samsung Galaxy tablet, as opposed to my usual iPad pics. The latter not working (battery won't charge!). For some reason the Galaxy takes much more vividly coloured and rather higher contrast photos. 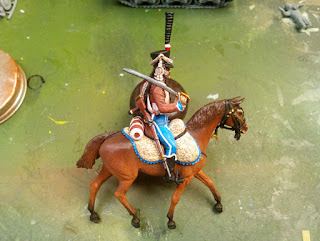 I'm pleased with how the browns and blues came out.


It still remains to do a few things, such as straps for the stirrups, reins, and one or two other minor bits and bobs. Oh, and of course none of these 1/32 or 54mm models have bases as yet either. But I need to take a breather, as I've been getting real into these. Hunched up over them, painting tiny details... my back/shoulders and eyes need some respite!