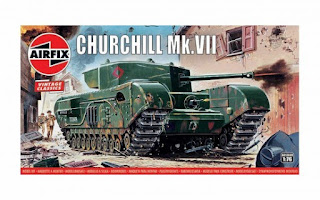 I bought this kit a while back, having previously brought several others from the same Vintage Classics re-release range beforehand. When I bought it was partly just on account of it being the cheapest kit of interest to me on the shelves at the model shop in Ely. I couldn't really justify spending on - or even afford - any more models at the time, having no money and several large piles of unmade models at home. But I could just stretch to £6! So I indulged myself.

I wasn't initially planning a conversion with this kit. But it so happens that, at some later point, I stumbled across photos of the Churchill AVRE with petard mortar, whilst researching something else. This reminded me of a former fascination for this variant, so I decided to convert it. I started building the model before this, however, at a meeting of the Wisbech IPMS. 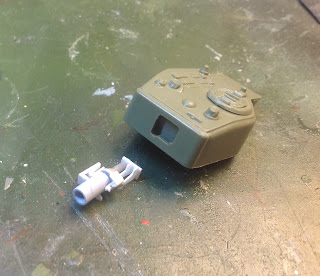 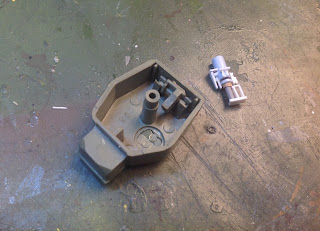 I retained the internal part from the kits gun, to mount the spigot on.


I opted to start assembly with the turret, as the running-gear of this vehicle, with all those tiny road wheels - eleven pairs making twenty-two times two, or forty-four of the little blighters - was a bit much. At this stage I made the turret up as per the instructions, including the usual gun. Not yet having opted to do the spigot mortar conversion.

It was only when I got home from the model club meeting that I made the decision, after assembling the body of the tank. That was Monday evening. Yesterday, Tuesday, I scratch-built the petard mortar. That was fun. Although I haven't done the greatest of jobs on it, using the wrong plastic card - too thick! - for one bit on the right hand side of the barrel. It's probably also poking out a bit further than it should; the length of the large tube is okay, I think. But the narrower part is probably a bit too long. 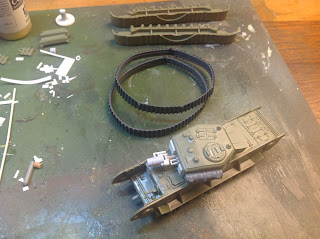 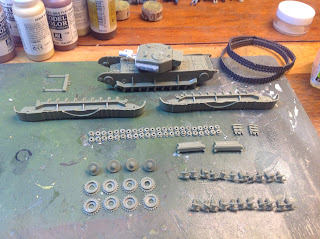 Getting the running-gear cleaned up ready for assembly. 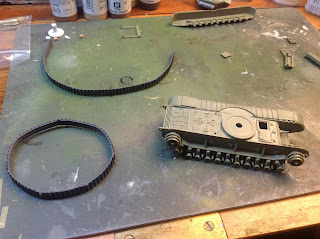 Anyway, never mind. Overall I'm quite happy with how it's come out. I decided that, apart for the mortar itself, I'd leave the tank as is. Some AVRE have numerous other alterations, for attaching fad Ines, bridging equipment, etc. But some that carry the mortar are otherwise quite normal. And even amongst the mortar variants there's a great diversity. In fact even the mortars themselves vary a fair bit!

All that remains now is to paint the bugger. I'm hoping that I can go to town on this one, and make the single colour scheme really 'pop', as they say. As for markings I'll do some research, and try something different from the decals supplied with the kit. I really like those square markings you see on British tanks. If they're appropriate, I'll use them. 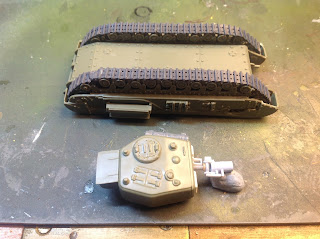 The main body and turret done... 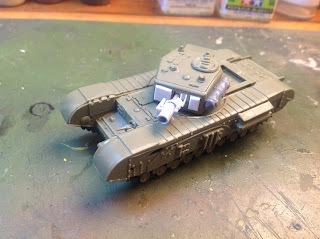 Just before turning in, and whilst half watching John Carpenter's Body Bags horror anthology, I undercoated the tank in Halfords grey. Tomorrow painting and markings! 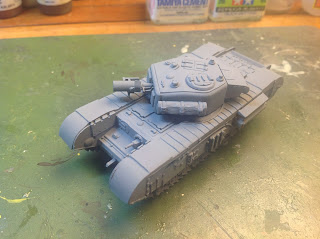 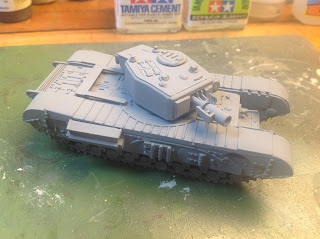 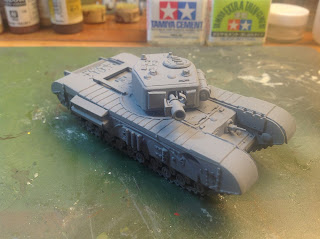 I love the spigot mortar!