Basing my 54mm Napoleonics recently I realised that I may not have the proper tools to make best use of 'static grass'. So called - I believe? - because a static or electrical charge is meant to be imparted to the plastic fibres that constitute this fake grassy green stuff. This charge makes the fibres stand on end, thereby looking more like real grass, as if reaching skyward for a sun-fuelled chlorophyll fix.

I quickly discovered that commercial static grass applicators are ludicrously expensive, with decent one costing in the £80-120 range. My hopes were momentarily raised when I discovered some folk, both commercial and independent, suggesting a simple plastic bottle with pepper pot type apertures atop it, merely shaken about a bit, might produce the required static. I made one myself, and was quickly disabused as to the efficacy of this method. Or put more simply, it did'nae work for me!

I then watched this video, by the talented Luke Towan:

... and his gizmo certainly seems to work for him. But being a bit lazy and impatient, i.e. not wanting to go to the trouble of ordering all the components required, wait for them to arrive, etc, I sought and found another similar video. In this one, from the antipodean Dave's Model Workshop, an electronic fly swatter is the basis of the doodad, as opposed to Towan's completely bespoke design:

So I decided to try and hybridise these designs. I'd use the fly-swatter as suggested by Dave, but follow the overall design (shape/style) adopted by Luke. I got me down to Boyes, a handy and somewhat old-fashioned local department store, which had everything I needed bar crocodile clips. I got them from West End DIY, another very useful local store. The core parts: metal sieve, electric fly-swat, plastic tub with removable lid and croc' clips came in at under a tenner. Result! Or was it? 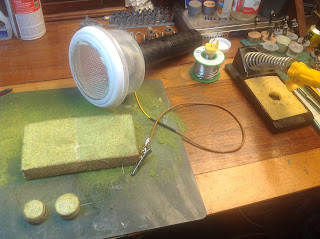 My DIY static grass applicator, alongside some test samples.

I certainly enjoyed buying the bits and building this gizmo. Doing a bit of working and soldering was great fun. But the key thing is, does it work? In order to find out, I did, as I had done previously with the 'shake-the-plastic-bottle' technique, a comparative experiment: one load of static grass was simply dropped on a base, by hand, whilst another was applied using my new applicator. 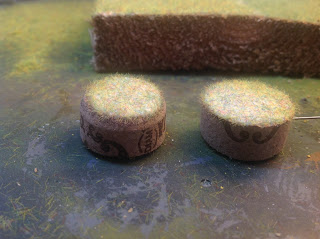 The image above shows my first attempt. At left is the untreated grass. At right - and the giveaway is the metal pin in the cork, for attaching the croc'o'clip - is the gizmo applied grass. Alas, these areas are, I suppose, too small. They look pretty much identical to me. So I resolved to try the experiment again, but on a larger surface area. 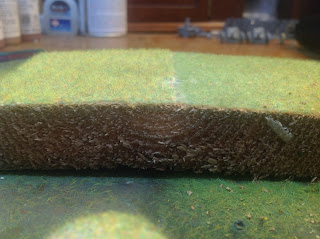 If anything the untreated grass at left looks more vertical.

This time I divided a bit of wood into two areas. I also used a slightly different mix for each area, to help visually differentiate them. Once again the untreated section is at left, and the treated section at right. The odd thing is that when the 'grass' comes out of the 'hopper' and through the sieve, it definitely feels much nicer and more efficient than when I sprinkle it by hand. The latter requires tons of grass to get coverage, resulting in lots of messy overspill and excess grass that needs to be removed.

But visually the result is either inconclusive again, or... dammit! Is the grass on the left more 'fluffed' up!? It does look that way to me, especially in the picture above. Many 'pro' static grass guys do multiple layers. And once again this entails using expensive products (this time a polyurethane spray adhesive). And the effect of the vertical static stacking is very cool. I'd like to try more layers, and see if my applicator helps. 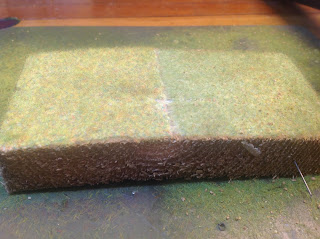 Slightly different viewing angle. Yep, the left has it... damn!

But, truth be told, for all the effort, and even the admittedly minimal expense, I'm feeling a bit disappointed and deflated by how this project's turned out. I think what I'll do next is check if the electronics are working. Either with a multimeter or continuity screwdriver, or possibly by giving myself a twin AA battery induced shock. Hmmm?

In the end, with the power button depressed, I touched the crocodile clip to the sieve. There was a loud pop and a bright blue spark. Glad I didn't go the self induced shock route! So the tool works, as the charge is definitely flowing. Sooo... what now? I guess I need to try and devise a spray glue applicator? So I can try layering a bit more grass. I suppose a cheap spray bottle using a watered down PVA mix should work fine. I just need to be very sedulous in cleaning it out, or it'd get bunged up pretty sharp-ish I imagine. Time for a cuppa, methinks.
Posted by Seb Palmer at 12:30