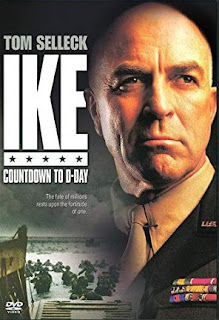 I watched this again, for the second time now, and with a friend this time. We both really enjoyed it. Indeed, we both thought it was really very good.

This almost has the feel of a stage play, as it's mostly focussed on just a few characters in just a few locations. Filmed in New Zealand in an incredibly short time for almost no money (by Hollywood standards), this punches well above its weight. And it makes no real concessions at all to trends in modern mainstream cinema. Instead it's a quietly serious and studious depiction of a very interesting period of history, and how a huge amount of responsibility devolves on one man, Dwight D. Eisenhower. 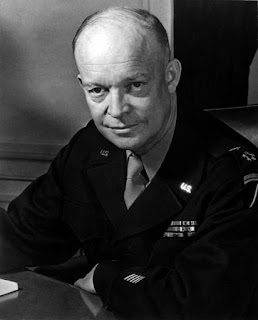 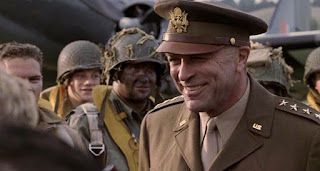 Tom Selleck plays Ike very well indeed. Perhaps the overall portrayal is a tad overly reverential? Well, yes, perhaps it is. But it's quite clearly as much a celebration, as well as a dramatic depiction of Eisenhower, in his role as 'Supreme Commander' of the Allied Expeditionary Forces for Overlord. If you've only seen Selleck as Magnum, P.I. this might be something of a revelation.

The roles of the Englishmen in the film are played by New Zealanders, but you wouldn't know it. And they're played very well, from Churchill to Monty, Stagg (the weatherman!), and even the Royal family. Americans play Americans and, aside from Selleck, there are a few faces I recognise from other films, including a much aged Timothy Bottoms (who I first encountered alongside the mesmerising young Cybil Shepherd in The Last Picture Show), as Bedell Smith. 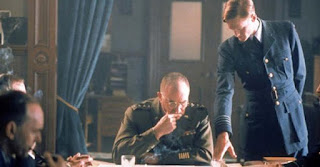 A lot of the 'action' is in conference, like this scene with weather man Stagg. 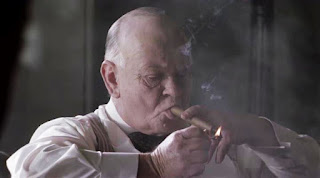 Ian Mune is great as Churchill.

There are some historical errors here - one I noticed was in reference to DD as if they were LCT - but there's also a lot they got right. The hagiographical aspect means they leave out any reference to Ike's possible relationship with his driver, Kay Summersby. Her character does appear briefly, but is not develop. She went on to be one his personal secretary, and he wangled rank in the US armed forces and US citizenship for her.

But the main drama revolves around Ike's deliberations over giving the go-ahead for D-day, particularly re his desire to have sole command, due not to egotism so much, at least as portrayed here, but a realisation of the need for clarity and simplicity in the chain of comman. And, perhaps most decisively and importantly, his ability to get competing egos to pull together. It's great to see a serious drama handled so well, and characters like Omar Bradley and Leigh Mallory portrayed in some depth, as opposed to the usual suspects, such as Churchill, Monty and Patton. 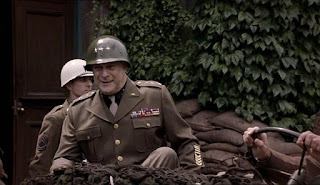 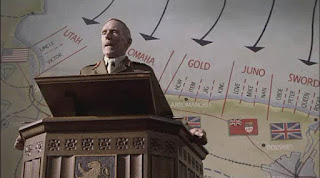 That said, those three are particularly charismatic, as no doubt they were in real life. And their relations with Ike as portrayed by Selleck are very believable. Monty comes off here better than he often does in books on WWII, perhaps especially books by Americans (mind you, Beevor gives him a panning). De Gaulle on the other hand is portrayed as something of a pompous egotist.

Although 'only' a made for TV film, I absolutely love this movie, and will certainly watch it again. It's good enough to bear repeated viewing. Quietly and seriously reverential about both its human and its historical subjects, whilst not a wham-bam action war-film - indeed, far from it - it is both deeply engaging and even moving. Definitely highly recommended.
Posted by Seb Palmer at 13:53