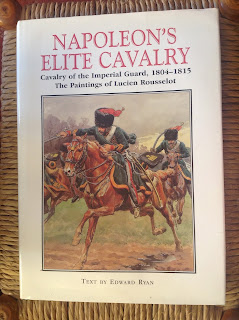 This slightly larger than A-4 sized hardback is really beautiful. I picked up my copy at Partizan, 2019, from (?), for £15. 91 colour plates by Lucien Rousselot are beautifully reproduced, each accompanied by a short text by Edward Ryan. Sourced from the famous Anne S. K. Brown collection, in the U.S, plate one depicts Napoleon, after which there come four groups: the Guard Chausseurs a Cheval (27 plates), Guard Grenadiers a Cheval (13), Guard Empress Dragoons (25), and Guard Lancers (25). 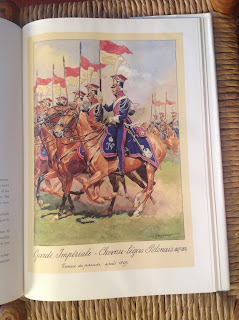 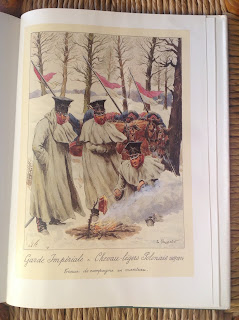 So, whilst there's wealth of fabulous artwork, and immense amounts of uniform info' to be gleaned, this is not a comprehensive look at either Rousselot's work, nor even the cavalry of the Imperial Guard (never mind the French cavalry as a whole). As such, this is quite a specialist book. But for Napoleonic uniform addicts like me, particularly those who dig the French the most (me again!), this sort of thing is, well... essential!

The day I bought this, I took it to bed with me - that's how much I love this sort of stuff! - and it gave me several hours of intense pleasure. And all I was doing was perusing the illustrations, with a little bit of reference to the text, where particular images prompted curiosity. The multitude of images makes one doubly or trebly aware of what an enormous and complex, as well as endlessly fascinating, subject Napoleonic uniformology is. 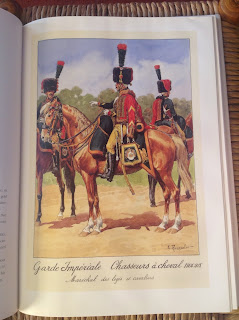 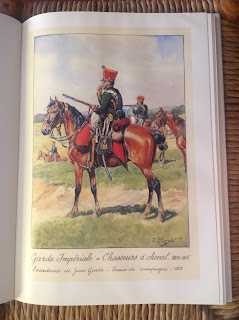 On that first night of bliss, I only studied the first segment of images; the twenty-seven given over to the Guard Chausseurs a Cheval. Looking at the incredible paintings made me realise that, ideally, I'd like to have several versions of any given regiment, in my miniatures collections. For example, one iteration might have their pelisse worn 'properly', i.e. not in the dandy over the shoulder manner of the hussar, whilst another set might be wearing their two-tiered capes, with covers on their sabretache and busbys unadorned.

I imagine some of these options may be covered in certain scales, most probably more so in larger scales. But they're certainly not options, at least that I'm aware of, in the scales in which I'm building forces, which are 6mm and 10mm. This prompts me to consider something I've long toyed with: sculpting and casting my own figures! I'd sooo love to do this. It's been an ambition since fairly early childhood. Perhaps this book will be the catalyst that galvanises me into action? 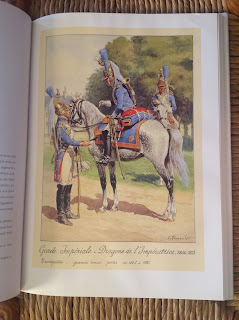 Or perhaps not? Witness the piles of unpainted French and Russian hordes. I struggle to get anything done half the time. Never mind ambitious stuff. It's so easy to think of great plans on the sofa. Getting up and putting them into action? Well, that's a whole 'nother ball game!

Any road, the book itself ends with this beautiful sabretache, on the back cover. Like the thing it depicts, this book is, to me at least, a precious and wonderful thing. 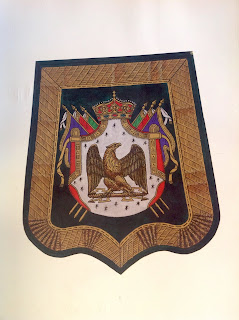