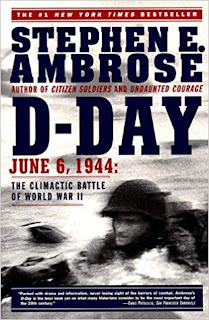 This is an excellent book. It's a pity it overhypes itself on the cover; as good as it is I don't think it's definitive. I'm not sure any single volume account of D-Day could really achieve that, frankly. It's also both heavily weighted to the U.S. perspective, and within that, the events at Omaha beach. Both latter facts are understandable enough, but mitigitate very heftily against any claims of being definitive. Never mind that the Canadian and British aspects are given very brief coverage, mostly at the end of the book.

A couple of more basic or general points in its favour, leaving aside for the moment the core content, which is excellent, are the glossary - they should be absolutely mandatory in all military history books, in my view - and the excellent maps, which by the looks of them were commissioned specifically for this book. 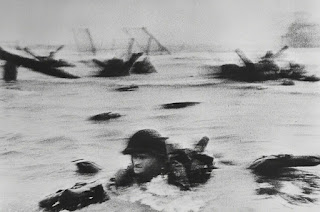 A fuller view of the Robert Capa photo that appears on the cover.

Ambrose has a very nicely tuned and balanced writing style, it's dry and factual where it needs to be without being dull, and he uses primary sources - a lot of oral history (interviews either he or others have conducted with veterans) - as well as any of the best (or should I say most popular/slickest?) war writers, like Beevor or, going back a bit further, Cornelius Ryan.

Indeed, re the latter point, Ambrose is in a powerful position to be the erudite authority he so clearly is, in that he was (now decesased, I believe?) at the time of writing, deeply involved not only in teaching on this subject, but also as a custodian involved in the fairly recently founded (again, when this was first published) New Orleans D-Day Museum*. And one of the many great things the museum could boast, with Ambrose involved again, was a unique (in its size and scope) 'oral history' collection.

And it's from these sources that this very colourful account gets many of its richer hues. 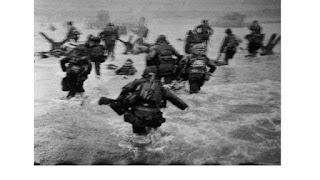 I believe this may be another of Capa's blurred but highly evocative images.

Whilst he doesn't shy away from the tragedies of war, collateral damage, friendly fire, prisoner executions, and all that, Ambrose does give a decidedly heroic ring to it all, pitting the 'citizen soldiers' (a phrase that's also the title of another book he's written) of an 'aroused democracy', fighting inly to liberate, against the empire-building Nazis, whose troops are - by this stage if the war, and in this particular theatre - either indoctrinated Germans, either docile or fanatical, or unwilling thralls, as per the Ost-truppen.

Whilst it's a all a bit rich - apple-pie 'n' God Bless the U. S. of A, and all that jazz - for a very sceptical chap like me, Ambrose does make pretty solid case in contrasting the sclerotic command malfunctions of the German's, Hitler in bed till noon, his panzers immobile without his personal authority, with the hands-off approach of Ike and Churchill. Gone is the  flexible auftragstaktik that characterised the first blitzkrieg years of the war. 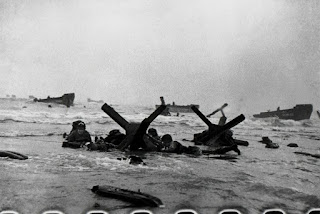 Capa again: Omaha, pinned down on the beach, sheltering behind German obstacles.

One of the things that winds up happening is that things are in exact reverse of how, on paper, they should've been: the Allies were landing against a supposedly extremely well-fortified coast, not using harbours, but beaches. The Germans, with the land and its transportation networks at their backs should've been the easier supplied and maneuovred. But, thanks to the Allies total air and naval superiority, it is the Allies who are free to manoeuvre and resupply more or less at will, with the Germans in Normandy effectively cut off, on a landlocked island.

Whilst D-Day wasn't on the scale, in terms of troop numbers and vehicles, as some of the largest clashes on the Eastern Front, it was the most massive combined operation by land, sea and air ever. Even Stalin freely admitting as much, and suitably relieved/impressed by it. The mind still boggles at the scale of it. And it continues to exercise a deep fascination. It's kind of shocking and surprising how little photographic documentation has come down to us so far. 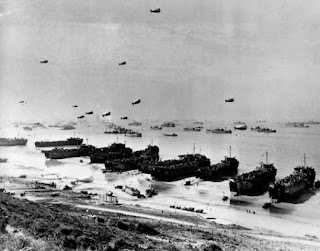 It's a bit surprising there aren't more photos like this, conveying the enormity of the operations. 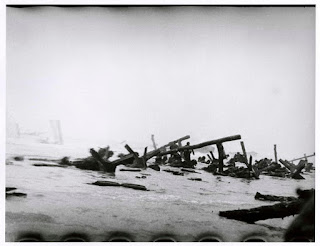 Another of Capa's few surviving images.

The fate of Robert Capa's photos [1], one of which is on the cover of this edition, may possibly sum that situation up. Related to all this, yesterday I caught the tail end of a recently produced American TV documentary entitled The Battle of Normandy: 85 Days in Hell, which appears to include lots of 'previously unseen' footage (much of it looking very nicely restored, and a good deal even in colour). So perhaps as time goes on more visual material will emerge? I do hope so!

Anyway, this book is excellent, a suitably rousing document that is also a tribute to the events and the men it brings to life again for us. Superb, and very highly recommended. 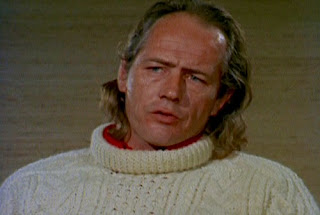 Ambrose as I first saw him, on ITV's superb The World At War.

[1] The story goes that Capa shot 106 photos, but that back in England the excited developer botched his job in his eagerness, only eleven of the photographs surviving. There are also stories going around that suggest Capa 'sexed up' his account. Read more here.
Posted by Seb Palmer at 19:10