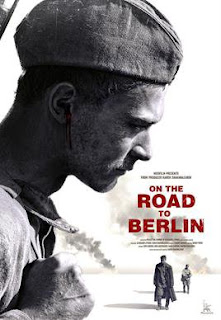 I just watched this for what I think is the second time. Certain scenes struck me like I'd definitely seen them before. But overall it was like watching the film for the first time. Strange! 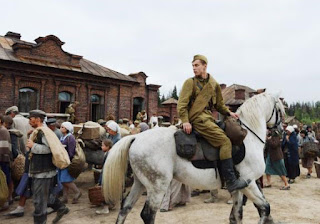 Lt. Ogarkov, as we first see him.

A very brief synopsis: young lieutenant Ogarkov is sent to deliver a message to the 341st Division, fighting at the front. However, the Germans are scything throughout the Russians, and Ogarkov gets caught up in a battle, failing to deliver the message. The 341st is annihilated, and Ogarkov becomes the fall guy, sentenced to death by firing squad.

The feeling of deja vu might in part have been caused by this being a very similar situation to the pretty awful film Battle of Warsaw, that I watched on Monday (also to be reviewed here as soon as time allows!). But the similarities end, more or less, with this familiar filmic trope: before sentence can be carried out on the hapless and unfortunate Orgakov, the enemies' precipitate advance comes to his rescue. 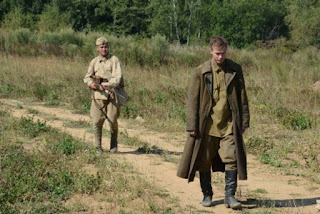 However, the sentry assigned to guard Ogarkov - no doubt seeing what happens to those in his charge deemed to have disobeyed orders - a Kazakh private named Dzurabaev, takes it upon himself, come hell or high water, to deliver his charge to HQ. Despite nobody knowing where that is, in the crumbling oft-surrounded 'front', which is mostly in headlong retreat anyway! 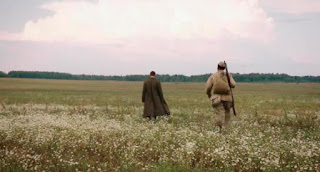 The Russian steppe, vast and inhospitable yet beautiful.

Sometimes the two of them are alone in the vastness of the Soviet Steppe, at other times they cross paths with German or Russian troops, or civilians. As their journey continues a strange fraught relationship grows between the two men. And it's this that is at the heart of this unusually humane war film. 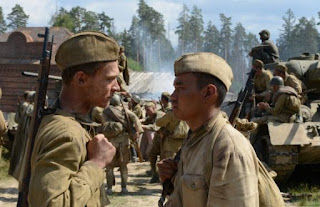 The odd chemistry 'twixt these two lifts this film.

Overall the quality of acting is good. Ogarkov and Dzurabaev in particular being very convincing in their respective roles. Nor is it, like many films in this genre, Western, Russian or otherwise, either overly simplified, or nauseatingly patriotic or romantic. The insanity of war, the Ostfront in particular, is represented (but not overdone), and a couple of women feature, leading one to expect corny romances to bloom, but such temptations are resisted, admirably. 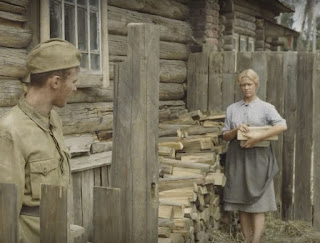 Cornball romantic subplots rear their head, but are avoided.

If I did see this before, I suspect I was half watching it, whilst model-making or painting figures, something I have got into the habit of occasionally in recent years. Giving it my full attention I found it to be really rather excellent, and in the end very moving. The title is bit misleading, frankly. But I'll let you discover exactly why for yourself. 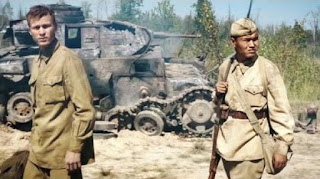 The attention to uniforms, weapons, materiel etc, helps the film.

Some Eastern European WWII (or other war) films are awful, some average, a few really brilliant. I'd have to say that I rank this one pretty highly: it's beautifully filmed, attention to detail re uniforms and equipment is better than average, as is the acting, script* and direction. Definitely recommended.

* This might be partly due to the source material, which is, according to IMDB 'based on a novella by the well-known Stoviet writer who served on the front, Emmanuil Kazakevich, Two in the Steppe, and the war diaries of Konstantin Simonov', with Kazakevich also writing the film's script/screenplay.
Posted by Seb Palmer at 14:28