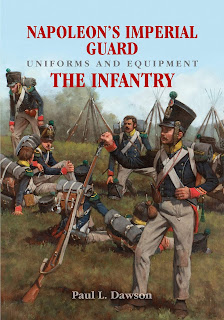 This is part one of a two part Uniforms and Equipment series from Frontline publishing, an imprint of Pen & Sword, by Paul L. Dawson. A deluxe hardback, copiously illustrated with both contemporary art depicting the Infantry of Napoleon's famous Imperial Guard, and superbly photographed original artefacts, covering weapons, uniforms and other equipment of this legendary elite formation.

Together these two volumes will make an indispensable new resource for those interested/obsessed with the history of this most colourful and exciting era. The level of detail is, frankly, astonishing. Occasionally even rather exhausting, if I'm honest. And yet I find myself strangely and magnetically drawn to it all, even down to the minutiae of what appear to be translations of original manuals of regulations and suchlike. 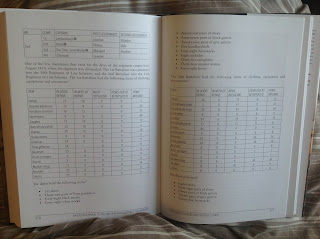 I have to confess that I baulk a little at the obsessive detail of the many tables of various types of data, which cover all sorts of things, from the numbers, names and ranks of individuals within given units, to the expenditure on various types of cloths or garments. Having said this, the deeper one delves into these subjects, the more such facts become, pardon the pun, part of the very fabric of history itself.

I love the illustrations, both the colour plates of beautiful old artworks depicting the peacock finery of these venerable French warriors, and the numerous photos of their gear, which exert an almost talismanic power, communicating across the ages a strong whiff of gunpowder, sweat, blood and the many soils over which Bonaparte's legions tramped, from the sands of North Africa to the Steppes of Russia. 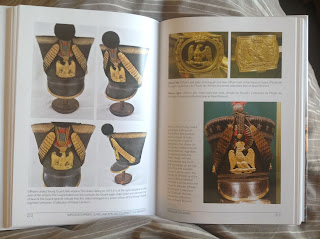 Artist and illustrator Keith Rocco, who many will associate with the American Civil War, thanks to his copious output of artworks covering that conflict, has been commissioned to produce new works for these two books, and they feature both on the front and back covers of the books, and in their own dedicated sections in the centre of the volume. These are superb, needless to say. And they help impart a real sense of the de-luxe, as befits a book about elite units such as the Imperial Guard.

Sadly this first volume - I eagerly await the second, on the Cavalry of the Guard - does suffer from the lack of editorial finesse that sometimes bedevils such specialist or niche areas of publishing as military history. Some examples of this include the usage of specialist terminology that isn't explained (or if it is, it's explained elsewhere in the book, and that explanation is not easily found), or such bloopers as the rear dust-jacket blurb describing this as a 'guide to the dress, weapons and accruements [sic*] of the cavalry [!] elements  of the most famous formation of the Napoleonic Wars'. 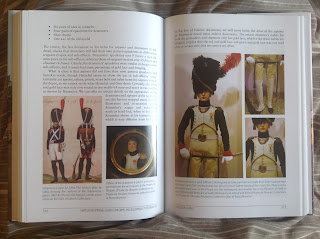 Nonetheless, this is a fantastic resource for the Napoleonic history buff, and an essential addition to the library of those who, like me, are obsessed with this period of history. I can't wait to see the Cavalry volume!

* Presumably the intended word here was accoutrements?
Posted by Seb Palmer at 08:44