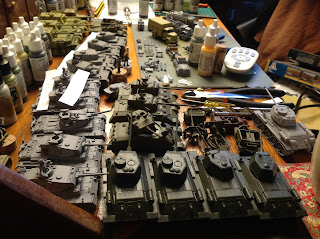 
So far I've been detailing the kits I've already got in hand. Although I did also build the two Italeri 'fast assembly' kits, which are very well designed, and, as they proclaim themselves, perfect for wargamers. They're better detailed and nicer than the Armourfast models which, whilst robust and easy to assemble, are just too clunky and lacking in detail. 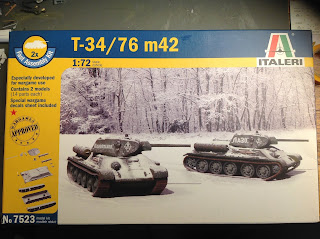 These are great, far superior to Armourfast.


So, first thing for this post, a quick look at building the fast assembly Italeri kits. The colour of the styrene is gorgeous, a near perfect Russian WWII green. If you wanted to go super basic, you could simply apply decals, paint the parts that aren't green and there you have it. But that wouldn't satisfy me, nor, I suspect, most of us modellers/wargamers. In fact I want to use these tanks as practice at weathering and making monochromatic colour schemes look good. 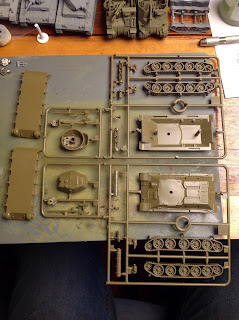 Got to dig that green styrene! 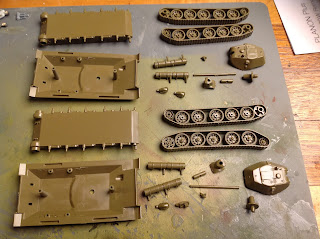 Laying out the kits for cleaning up. 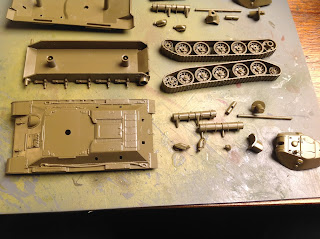 Tank number one cleaned and ready for assembly. 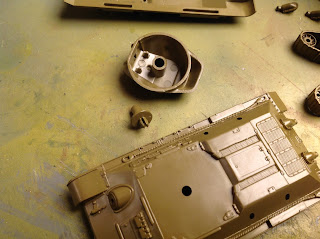 The turret mounting clip is a really great bit of design. 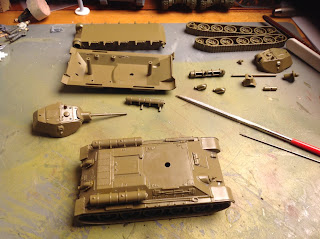 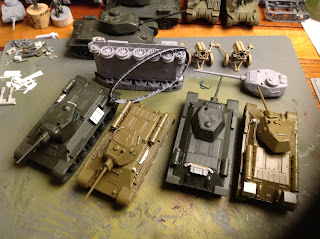 
As well as detailing the models a little, e.g. with wire handles, lamps, boxes, blankets, and so on, I had to reattach an idler wheel on the Trumpeter T-34, which snapped off when I was supergluing the tracks in position. I'm also drilling out the barrels on a pair of Italeri (old Esci) Nebelwerfers, as they were ludicrously thick. You can see before and after above. 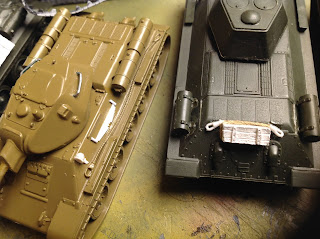 Not a great photo, but I'm pleased with my scratch-built saw and headlamps.

In the photo above you can see, albeit not very well, my scratch-built saw and headlamp, on the left. At right you can see how basic the rear engine-deck of the Armourfast kits are; no grill detail. I've also made a boo-boo with the towing cable, tying it off as if it's just strong, as opposed to steel cable. That's it for tonight. I'll do further detailing tomorrow, and then get them all undercoated and base coated, ready for detailed painting, decals, and weathering, etc.

---------------
And now it's tomorrow... today! Decided I'd try a bit of silk purse from a sow's ear, and replace the Armourfast rear deck grill panels, with some mesh and plastic card. Got the mesh from Ely City Cycle Centre's model department, along with some more Vallejo acrylics and some (new to me) Tamiya liquid cement. 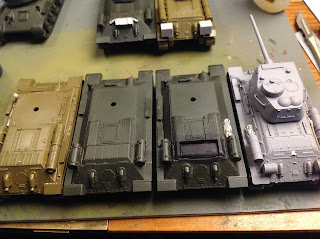 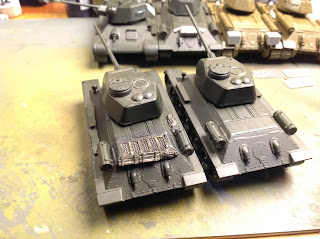 Is this overkill on an Armourfast kit? Hmmm!? It certainly improves the tank, in my view. But it also makes me feel the need to do similarly for hand rails, lifting eye-hooks and tracks. Can I be bothered? It remains to be seen. I've already cut out mesh for the other three Armourfast T-34s. But one of them is going to be very difficult to do on account of stowage I've already added. Unless I remove it... 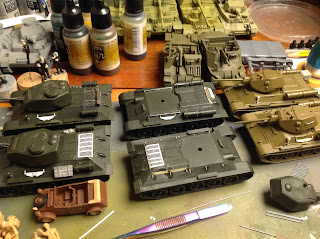