Having just read and reviewed Tony Harwood's new book on buildings for the Napoleonic era, I thought I should try my hand at making something. Most of my 6mm and 10mm Napoleonic armies were bought for recreating events of the 1812 Russian campaign, so I'm starting with a Russian building.

My inspiration for this project.


I picked a tower that appears to be part of an Orthodox church building complex. I'm keen in the long run to build lots of Russian buildings, including parts of Smolensk, and the town of Maloyaroslavets. I also want to make lots of ordinary buildings. Whenever I search for buildings of the era, I mainly find the most opulent and ornate Russian churches, or maybe a palace. It's quite hard to get good ref for more ordinary town or country architecture. 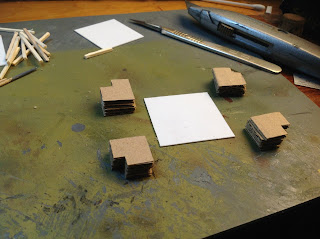 Started with plastic card an corrugated card in layers. 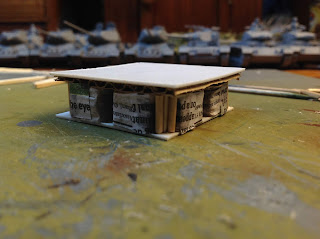 Added some paper and toothpick columns.

I also have a bunch of commercially produced buildings, which are mostly either log cabins or churches. That's partly why I've wound up starting on this particular building, as it's neither a log hut, nor a complete church. It also featured a number of things I thought might be fun to model: tiered or stepped levels, columns, porticos, ornament and doors/passages that can be looked through. 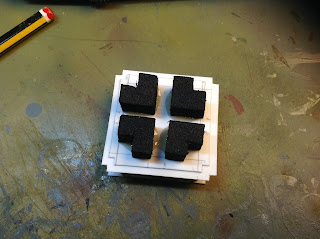 Tried my hand at using foam, a la Tony Harwood. 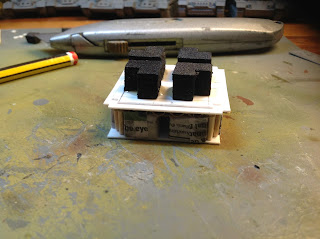 It bulks out quicker than card, but...

Scale wise, I've kind of busked it. I'm doing less levels/layers than the real building has, and simplifying what levels I do have. I'm also drastically squashing the vertical axis. If I built all the levels and stuck to true scale for this model it'd wind up massively tall and very spindly, and probably likely to topple over. 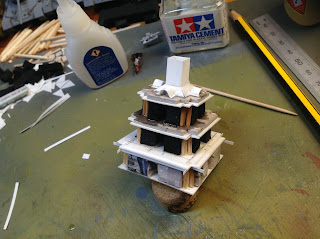 Bit of a jump to three storeys plus tower. 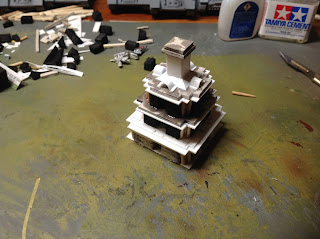 Already I've learned quite a lot about working with numerous materials. But I can see I still have an immense amount more to pick up. I've used card from bother back and front of old sketch-books, dense black foam from a circle template backer, plastic card, matchsticks, cocktail sticks, and numerous types of glue, including everything from PVA to super-glue. I've also used a Revell plastic putty filler, and DAS modelling clay.

All these each require different tools and skill sets, as well as China the mouse to use the right material or tool at the right moment. Certain materials, especially when working in thus tiny scale, like the foam and the corrugated card, can compress whilst cutting. The foam springs back. But the corrugated card won't necessarily do so.

There are aslo issues like knowing when to glue more detailed parts in place. I glued the matchstick and cocktail stick columns in place too soon. And without properly squaring off the internal corners, meaning that many of the columns lean rather drunkenly. Making the curved roof 'lights' (windows) on the uppermost roof (excepting of course the dome) was challenging. But I like how it's come out.

I had to stop at this point, not having anything to hand suitable for the dome. And then today I bought a few 10mm diameter wooden beads, sawing a small part off one, and passing a cocktail stick through. I reckon it looks ok!? 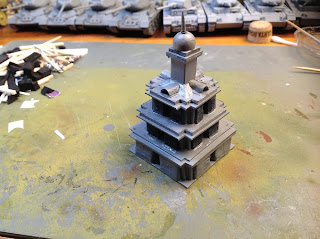 At this point I sprayed the building in Halfords grey, so as to get a better sense of what I had so far. All the different colours, materials and textures were making it hard to really see the building clearly. I realised some time before this that I'd diverged from my inspiration/source ref in numerous ways. Which was fine. But one thing I wanted to preserve design wise, was the hermetically contained ground floor level. 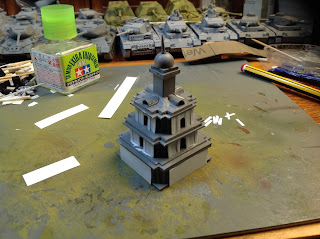 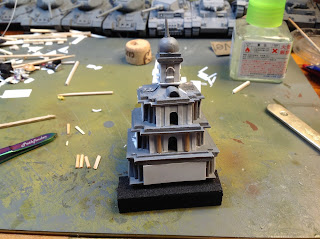 I'm quite happy with how this is developing. Particularly as it's my first such build project since returning to the hobby. I think it'll make a decent addition to my Russia 1812 arsenal. It's great to get started on the scenery side of things. But I'll have to start working faster and more efficiently, given how much I want to build, e.g. a wargame-able reduction of the whole of Smolensk! I must be mad... 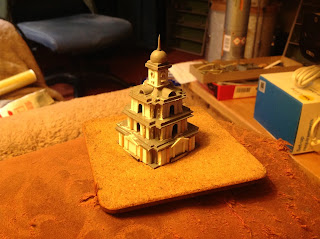 The tower at close of play today. Taking longer than planned!