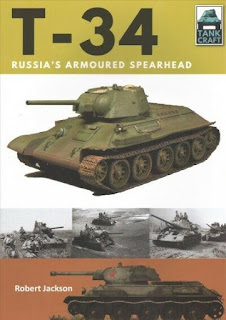 This is my second Tank Craft book. And I have to say that, so far, I really love them. Although I mostly make 1/72 German WWII models, I do have several T-34s, and a few other Russian vehicles. This book provides inspiration and information, in turn giving motivation, to finish those kits.

As Tank Museum curator David Willey notes in his excellent 'Tank Chat' on the T-34, this vehicle has become an icon of Russia's Patriotic War, as a result becoming - as with many German Panzers - wrapped in layers of myth (check out the bizarre Russian film White Tiger, if you're in any doubt about this!).

Author Robert Jackson gives what I believe is a balanced account of the facts as we know them: like many of the fabled German Panzers, Russia's T-34 had a bumpy genesis, and was beset by problems throughout its evolution. But, as this book's subtitle - 'Russia's Armoured Spearhed' - suggests, it was undoubtedly essential, as was the Sherman for the Western Allies, to eventual victory. 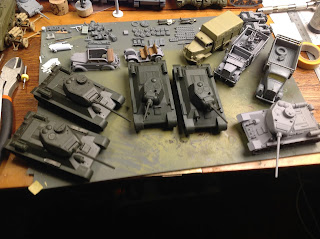 My current clutch of Russian WWII armour, all T-34s.

The first two chapters, Development and Design and The T-34 in Detail, address this historical situation with admirable concision and brevity, before chapters on Camouflage and Markings, Model Showcases, and Modelling Products address the modelmaking aspects. Into Service and Into Action and Enter the T-34/85 flesh out the campaigns of WWII on the Eastern Front, examining the performance of the t-34 and its variants in context, before the book concludes with a brief look at the postwar use of the T-34, in theatres from the Middle East to Asia and the Balkans.

I thoroughly enjoyed this slim but info-rich and superbly illustrated book. I'm no expert on the T-34. But I feel I know it much better now. And this book has prompted me to order several more kits of both the 76 and 85 variants, which I look forward to making. The models in the showcase are all very well done. Most are 1/35. My only real gripe re this book (and the series as a whole, insofar as I'm getting to know it) is that I'd like to have seen at least one 1/72 build. 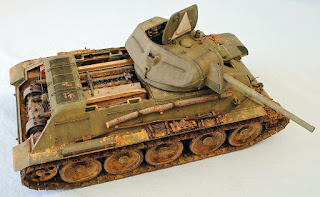 The most impressive model is Brian Richardson's 1/16 Trumpeter T-34/76, which has been completed to a stunning level of realism, with an amazing paint job topped off with terrific weathering.

At £15 a pop (RRP being £14.99 at the time I'm posting my review) these slim Tank Craft titles are reasonably dear. But I think they nonetheless represent decent VFM (value for moolah), as they combine a lot of useful info with copiously rich visual reference. The colour profiles section is terrific, with nine pages of well executed illustrations to inform and inspire.

I look forward to more titles from this series, which admirably meets its stated brief of providing modellers with 'a new standard of primarily visual reference of both full-size tanks and their scale models'.
Posted by Seb Palmer at 22:04