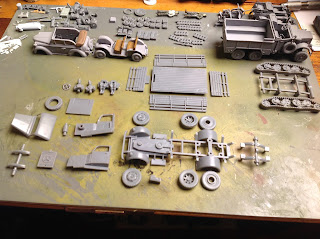 Although they're very basic, I do really like these PSC kits. Sure, they're not exhibition quality. But that's not the idea. They're simple, robust wargame models. And they do the job superbly, in my view. I already plundered this box to help me finish my Zebrano Einheitsdiesel, covered in the previous post.

Now, with the remainder of the contents of the box sitting about getting in my way, I figured why not start building them? Well, one argument against would be the enormous backlog of unfinished models that's accumulating on my workbench. But, ah, the feck wi' it, as they might say on Craggy Island. 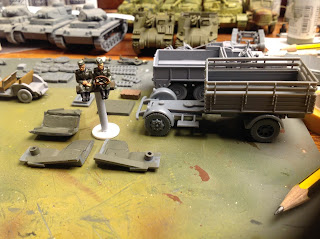 Painting the interior of the cab, and the figures.

I've decided to make the first one up as a Mercedes, as I already have a few Opel Blitz models built. I'm really loving working on rear-echelon materiel. Today I've put most of the truck together, and painted the inside of the cab and the two figures, albeit the latter is a quite basic paint job.

Teresa watched a godawful sci-if movie as I beavered away. I then watched another, sort of, whilst working on my models. The one Teresa watched was called The Predator, or poss Predator II, but didn't seem all that related to the original Arnie movie. I didn't find out what my one was till the very end, Extinction. Although I didn't pay it close attention, it seemed alright to me. Certainly a lot better than the Predator one. 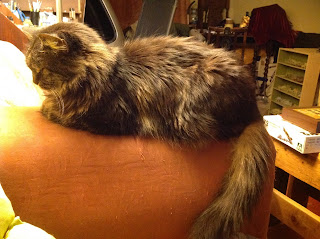 Tiggy remained unmoved by Sci-Fi horror, or my modelmaking efforts! Now I'm chilling with snooker on YouTube, and getting ready to climb the wooden hill to Bedfordshire. Tomorrow we visit Patrick on his boat. But I hope to get some modelling in as well. 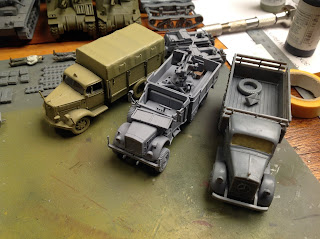 I have three German trucks at present: Airfix, Zebrano and PSC.

Sunday evening we got back from visiting our pal Patrick, on his narrowboat. I assembled the painted interior and figures for the cab of the PSC Opel Blitz truck, at right in the above picture. At left is an Airfix Opel Blitz, from the set that also includes a Pak-40 gun and crew. And in the middle is my recent Einheitsdiesel with Flak-37.

I have two more unbuilt PSC trucks, and numerous others in the pending pile, including several ambulances, a fuel tanker, and a whole heap of various staff cars. I also harbour a strong desire to scratch-build a few trucks (some partially, using the PSC left-overs, etc, some completely), using resources like the Nuts And Bolts [1] title, issue 32, on German 6-ton lorries, and other reference materials.

[1] You can find the complete inventory of Nuts & Bolts titles here.
Posted by Seb Palmer at 01:32