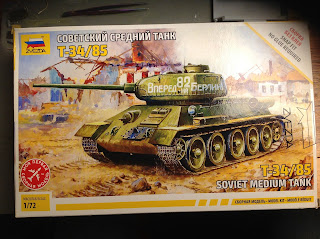 Reading and thoroughly enjoying the Tank Craft T-34 book recently inspired me to return to working on a selection of T-34 variants I had already built, sprucing them up with some extra detailing/stowage, etc. It also prompted me to buy some more models, such as the Italeri fast assembly T-34/76 covered in my previous post.

I also bought three Zvezda kits: two T-34/85s, and a SU-100. I made a start on one of the former. And I'll probably also build the second, whilst I'm at it (probably going to save the SU-100 for another time). And a modelmaking buddy came over today, and very kindly gifted me a Hasegawa 1/72 SdKfz (?) 1/2-track model. 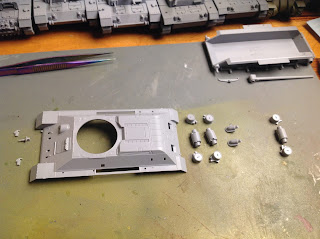 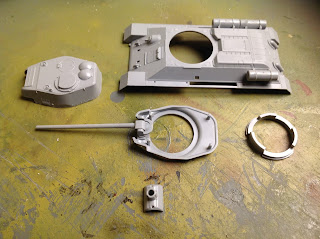 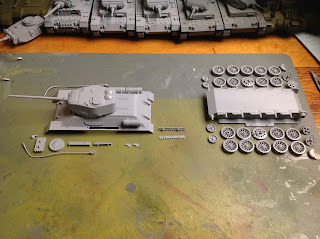 Prepping for steps three and four...

But back to the Zvezda T-34/85. This is yet another superb model, in my view. Excellently designed, so it can be built snap-fit style. I of course glue it all up anyway, save for such elements as the turret traverse and gun mount. I've started using Tamiya quick set cement, with its funky little brush applicator. For years I've been using the gloopy stuff out of tubes. Good glue, but prone to make models messy. The Tamiya stuff helps create better looking kits. 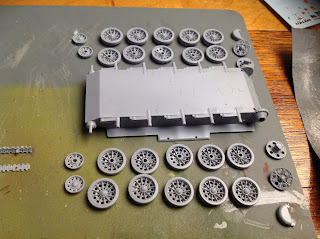 Cleaning up the running gear. 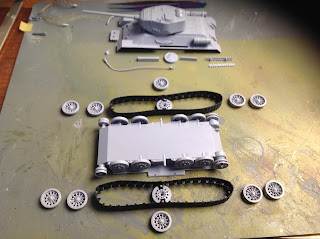 The design, fit, detailing, etc, of the tracks is terrific. This snap-fit system gives really great tracks. The only issue is that the very thin styrene is apt to break occasionally. They're quite fiddly to prepare and assemble, and only go together properly one way. But I do rate them very highly. 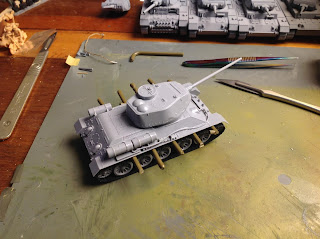 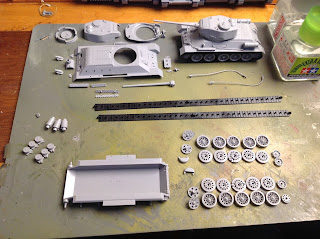 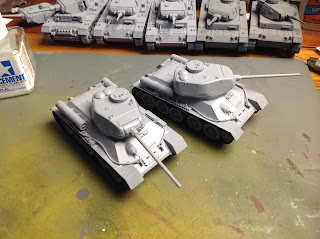 So the two kits are built. The plus sides are many, the negatives very few. One significant bummer, however, is that the turret ring assembly is such that it creates a very secure and movable turret, but one that can't easily be removed for painting. Another lesser issue is the absence of the rod style rails on the hull and turret that most T-34s, be they 76 or 85 types, had.

I think this gives me a total of nine T-34 variants now. Just need to do a little more detailing on a few of them, including the rods/rails/handles, whatever they are, on these. And then it'll be time to batch paint them. 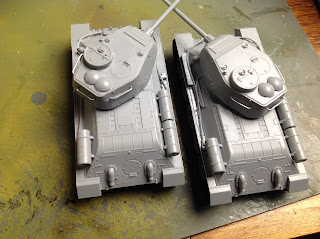 Turret rails added to the Zvezdas.

Well, it's some time later, on Easter Sunday, and in the midst of other activities (or should that be inactivities?), I've snatched a few moments to add some detail to these and several other T-34s. I put rear-lamp covers on several of the T-34/76s, and turret rails and engine cover rails on these Zvezda T-34/85s. There're still more railings required on the Zvezdas, and tow cables for a few of the Armourfast kits. Once that lot's done, hopefully tomorrow, then I can undercoat the whole batch (plus sundry other kits that are waiting to be painted) in Halford's grey primer. 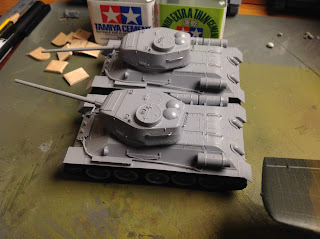 One final thing to note; I didn't follow the assembly instructions on the second of these kits. Instead I simply cleaned and prepped all the parts, laid them out, and stuck 'em all together. By and large this was fine, coming off the back of the prior build. But I did screw up with a few things, like not putting the gun into the internal elevating doodad before gluing the latter in place.

As it happens, whilst the turrets rotate nicely, neither of these T-34s have guns that will elevate or depress. The first one 'cause I glued several parts together to quickly, and the whole assembly leaked and set solid. The second 'cause I had to butcher it and glue it in place, having gone about things in the wrong order... hey-ho, so it goes!