On my workbench at present I have a couple of PSC Pz III models. I decided they needed doing as they were out of their box (one having been built some while back), just generally getting in the way. Rather than keep moving them around, I thought why not build the buggers?

After a late night sesh gluin' them together, I dug out all my similar looking models from my display shelving. I have what I believe is an old Fujimi kit, which I've built with lots of open hatches, partly on account of it having pretty cool internal detailing (rare in this scale), the rest are far more basic Armourfast or PSC kits. What I realised was that I can't actually tell, at a glance, which are Pz III or IV, let alone which variants each might be. 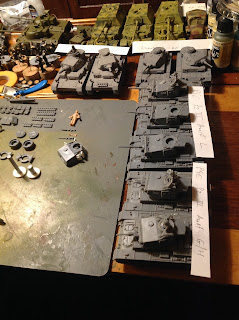 My production line of Pz III, Pz IV and sundry other tanks.

Quite by accident, whilst relaxing watching some snooker on YouTube, I saw a link to a Tank Museum Tank Chat on the Pz III (see above). Even more serendipitously, I'd chosen to do mine as Ausf L, which happens to be the very version curator David Willey stands in front of in the Bovington museum, whilst delivering his superb sermon.

Willey says in the Tank Chat that the Pz III and IV were so similar, many wonder why the Germans bothered making two different tanks that were so alike. That made me feel a little less like a dunce for not knowing which is which. I decided to go through all my models and work out what was what. Turns out I only have two Pz IV, the rest being various Pz III variants. 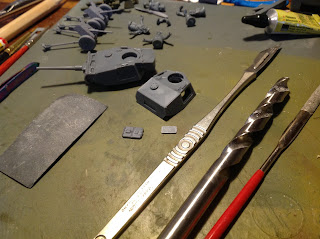 I started working on a spare turret. Drilled out the turret hole. 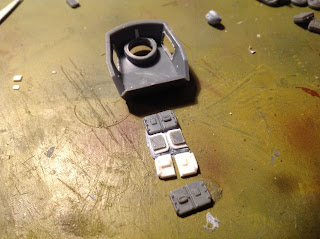 Also cut out the doors, and fabricated new ones, to have open.

The PSC kits are great 'cause they have beacoup de bits, allowing you to build numerous variants. These can go in the spares box, for potential use in other builds. It was too late to use them in these builds, as I've already made these models. But I've decided to prepare a turret in a manner akin to the Bovington Pz III, Ausf L, only with numerous hatches open. 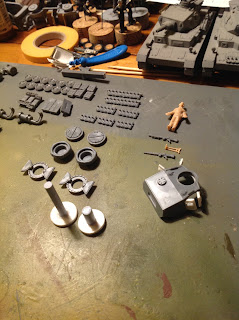 Hatches glued on, MG42 and commander at the ready.

In the picture above the two strange circles with sticks attached are two layers of plastic card glued together, and then stuck on the end of a thick bit of sprue. I can then chuck these up in a drill, and sand them into circular cupola components, by running the drill in one hand, and applying sandpaper to the discs with the other. They actually started out square. I cut them down a bit with the trusty scalpel. But, as shown above, they've already been sanded to close to the final size.

Also visible are an MG42 and mount. I had to remove the bipod stand from the front of the MG barrel. A second unaltered MG42 is visible above, as is the cupola MG-mount. The tanks own internal MGs were MG34s. Pictured below are some of the cupola components, such as the circular bit I crafted from a double layer of plastic card, using a drill and sandpaper. I also cut away the ring on the open cupola/hatch component from the kit (an unedited version is shown nearby for comparison). 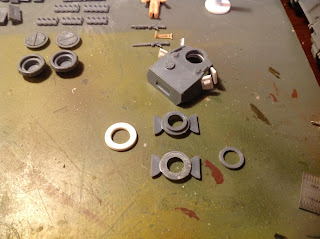 No spare/complete cupolas, so I had to partially scratch-build one. 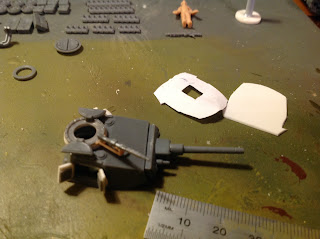 Fabricating the bottom of the turret, with a paper template. 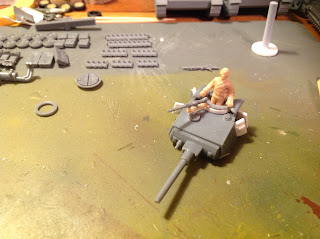 Everything thus far glued together.

I've enjoyed making this new Pz III turret. It'll await another model of the tank itself. I still need to add the little triangular plates at the lower front of the turret. And I may also want to further sand down the flammpanzer barrel that I've already sanded down a fair bit to turn it into an ordinary 50mm gun.

This post is also about inspiration and information. As well as David Willey's excellent video on the Pz III, I also watched and thoroughly enjoyed a similar presentation by Lindybiege, also filmed in front of the Bovington Pz III, Ausf L. Both these videos informed and inspired me, re the modelling work I've been engaged in.


Thanks to the videos and other research for these Pz III models I now also know an easy way to tell if a tank's a Pz III or IV at a glance: the Pz III has six sets of road wheels, and the Pz IV eight. And to finish, a final thought re my turret conversion... the commander figure is a bit Wallace-ish, as in a Wallace and Gromit, with his fat arms and oversized mitts. I may attempt to slim him down a little bit.