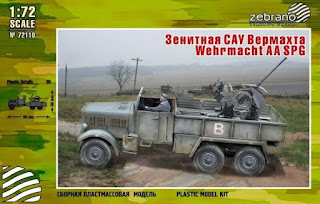 I bought this kit from TAS Models at On Track in Folkestone, earlier this year. I chose to use it as the kit I take to the Wisbech IPMS, on their fortnightly get together. Progress has been painfully slow. Chiefly on account of the appalling almost illegible instructions, and the missing or damaged parts. 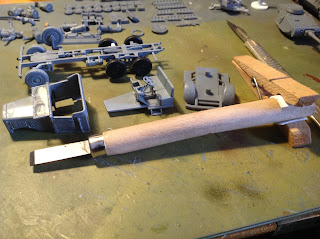 Such issues can actually make a build quite fun, in a perverse sado-masochistic way, by creating challenges to be overcome. And that's really been the best thing about this kit; overcoming the arseache of each new problem, as it arose.

The kit itself looks like it's one that's been issued by other companies in the past. And it also looks like it's one of those Eastern European short-run jobbies, in the Ace Models type line. For example, moulding is a little coarse, with plenty o' flash, malformed parts, and several different colours of styrene. 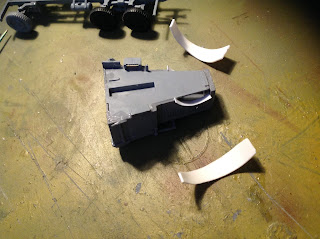 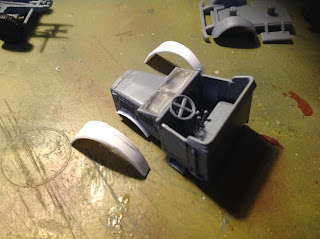 I put little 'tabs' on the cab wheel arches, for attaching the mudguards.


Early in the build I had to fabricate part of a malformed suspension element. I discovered fairly late in the build that one rather major/essential component, a section that includes both front mudguards, was missing entirely. I tried to fabricate my own from plastic card, but they looked pretty shite, and weren't quite large enough. So I pillaged some from a PSC set of German trucks (a Mercedes variant).

Amongst the many issues that plagued this build were problems getting the final three major components of the truck properly aligned. By this point the model as a whole really doesn't look too bad, in fairness. I'm not sure how the flak gun is supposed to be mounted, as it won't sit in the rear as supplied; the two-footed part of the guns' tripod sits up on the benches, whilst the single leg wants to rest on the floor... Hmmm!? 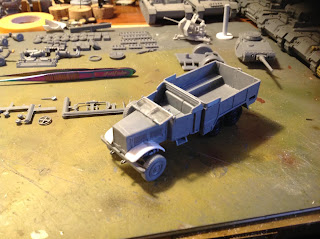 Ok, so my scratch-built mudguards were a bit crap. 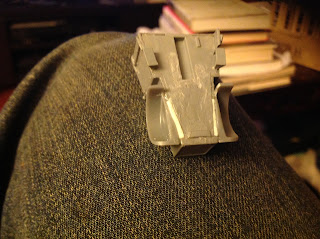 So I cut some off a PSC Mercedes truck. 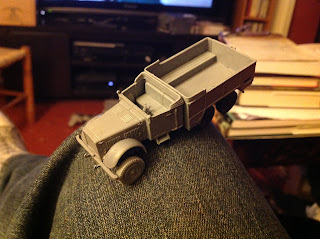 I guess they're a bit high. But they do look better. 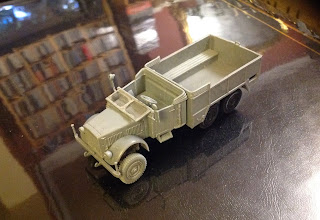 Pretty much everything in place. Looking quite good. 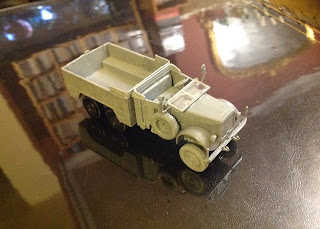 Sitting on the couch watching Lethal Weapon 2. The model is more or less finished, assembly wise. The 37mm AA gun is done as well. But I don't know how I'm young to combine the two models. In fact I might not bother, and simply use this as a truck. I've ended up enjoying the build, overall. And it's a decent enough looking model of a great vehicle.

But I couldn't really recommend this kit as it came to me in such a ooor state. There were damaged and missing pieces, and the instructions are utter rubbish, printed almost illegibly and nigh on impossible to decipher.

I'm thinking I'll paint this in early/mid-war grey, and try my hand at improving my  shading/weathering, etc.
Posted by Seb Palmer at 20:53