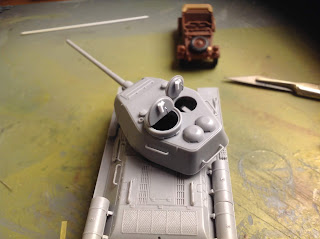 The last thing I needed to do prior to undercoating my ten T-34s was add some scratch-built handles to the inner sides of the turret hatches on the Revell kit. With this done I duly sprayed them all with Halfords grey primer. The latter seems to vary in consistency. Occasionally I get a can that's heavier and grainier, producing a rough surface. That's happened this time, and is a nuisance. 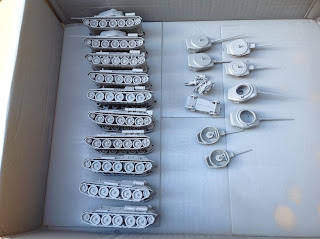 Also getting sprayed, the Fujimi BMW R-75 and Kubelwagen kit, and accompanying figures. These latter include a reasonably rare example of a German officer in 1/72 giving the 'Roman' or 'Heil Hitler' salute. 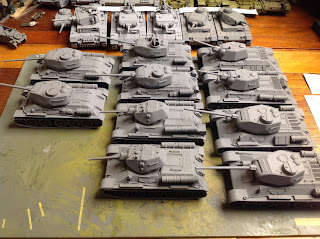 And there they all are, my little Russian 'horde', in front of similarly large numbers of German armour. I'm really rather chuffed. And I'm particularly pleased that I bothered to detail them all somewhat, to improve them, and give a bit more variety and, hopefully, realism.
Posted by Seb Palmer at 20:53