More Miscellany - A Loon In June 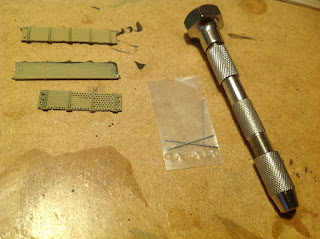 In between painting stuff Over the half-term hols, I've continued to fiddle with a couple of models, inc. the 54mm Hussar, and drilling holes in the Sdkfz 7/1. 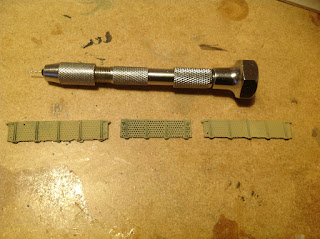 I have a model-making engineer buddy who tells me he mostly drills holes these days. For me it's still sufficiently novel as to be an almost meditative form of relaxing fun; except, that is, for the hunched posture I feel forced to adopt. Some kind of raised work surface might be a good idea? 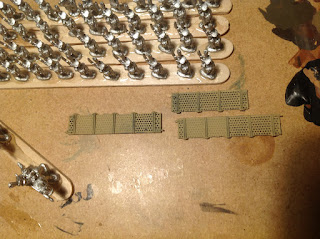 That's enough for one day!

So, I'm now well over half way there with my hole-drilling. And, on the whole, I'm not yet wholly insane. 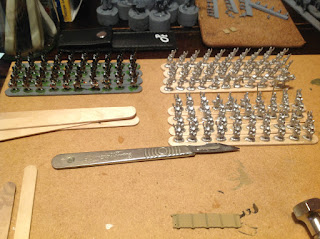 I'm also working on further batches of 10mm Napoleonics. All Russian at this point, and mostly by Magister Militum, save for the odd Pendraken officer, and two squadrons of Old Glory Hussars. A lone squadron of MM Russian Hussars includes a few figures toting lances. The OG figures don't include any lancers. Can any of you folks tell me what you do, re including lance-bearers in Russian Hussar regiments/squadrons? 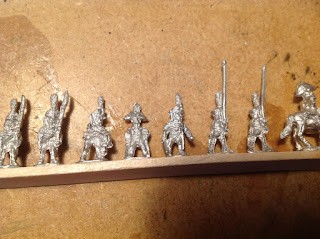 The guy on the right of the standing officer with the bicorne is no longer pointing forwards.

I've also had the scalpel and superglue out, doing a bit of surgery on one or two figures. At this tiny scale I don't mind the uniformity of pose for rank and file, but it's nice if officers aren't all identically posed, as they stand out a bit more. So I've lowered a pointing arm (and removed the indicative digit!), and I've got another fellow turning his head. Small changes, but worthwhile, I feel. 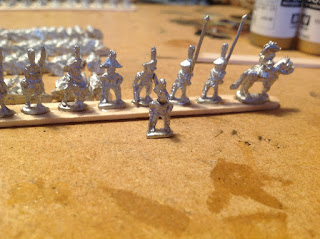 A slight twist of the head to look over the right shoulder for this officer. 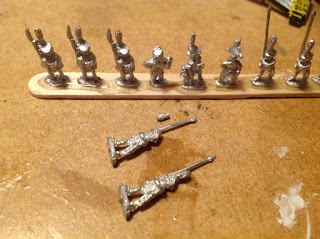 This standard bearer kindly donated his plume to an officer.

I also had to add another shako plume to a plume-less Pendraken officer... very fiddly!

And last of all, when I popped over to the Ely model shop for a pot of Vallejo silver acrylic - swearing I'd not be tempted buy anything else - I did at least remember to pick up more 0.5mm drill bits (3! So I have a spare or two). But I spotted an Academy 1/72 German truck (they don't specify the make/model), and simply couldn't resist! 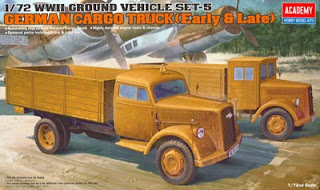 Sadly they only supply sufficient parts to build either/or, and not both variants.