Determined to return to my Napoleonic 1812 armies, and in true Napoleonic fashion, I decided I'd try to paint a battalion a day over the 1/2-term break. I only got as far as priming and (temporarily) basing this lot on Saturday, and then I got as far as pic three below, by Sunday, whilst ... on bank holiday Monday.

Well, you get the picture; I'll be lucky if I finish one battalion at this rate! 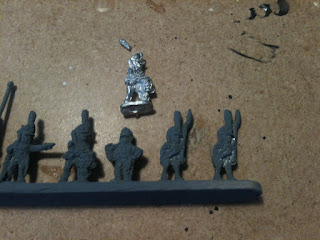 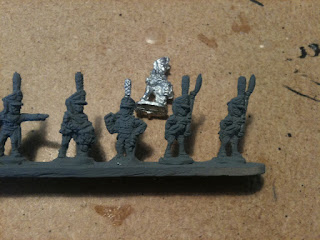 Before I could start in properly on these fellows I noticed (only after undercoating, as can be seen in the above pics) that one of the figures - a lone Pendraken amongst an otherwise Magister Militum battalion - was sans shako plume. So I cannibalised one from a spare figure, and super-glued it in place. As a by the by, it's interesting to see how different the above pics -taken on my iPhone - are, from those taken on the iPad under exactly the same lighting conditions. 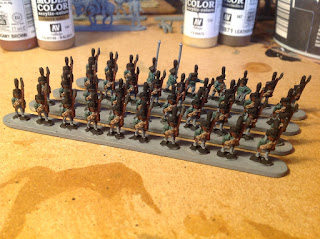 A Humbrol grey acrylic basecoat, plus a few major blocked in areas, inc. dark brown base for flesh!


I'm using some pictures from the Blandford Colour Series title, Uniforms of 1812, by Haythornthwaite and Chappell. Most of my uniform reference books remain packed away in boxes, as we await the purchase of our new home. It's fortunate I stumbled across this handy little book at Salute, as I can't face attacking the Eiger of book boxes! 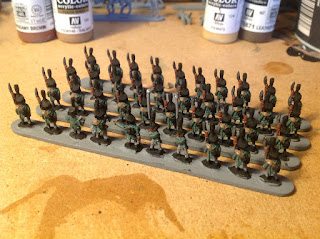 Rear view, as above.

At Partizan I was somewhat tempted by a big expensive book in Russian, except that not only was it over £60, but it also only had a small portion of the book given over to the Napoleonic era. I saw an amazing (but even more expensive) Russian book on uniforms - but this one, I think, dedicated to the Napoleonic period - on the Ken Trotman stand a few Salutes back. I do wish I'd bought it! But I think it was £120 or more! 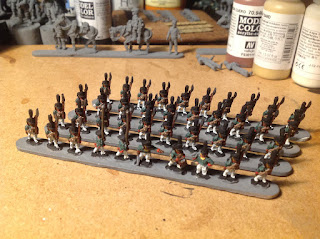 Most major colour blocks in place. Starting in on detailing colours.


But the long and the short of it remains that I have far more and far better ref. on the French and their allies than I do regarding the Russians. It's a good job there's the interweb as well. I've been offline a lot recently, due to being between Holmes, so to speak. Posting to the blog has been a right pain. I finally caved in and got a TP-Link portable hub thingy. It's made getting online easier, but not hassle-free, as we live in an area with appalling network coverage (for most networks, apparently!). 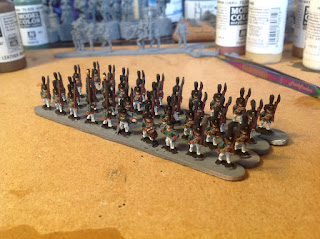 Still a ways to go, but flesh helps them to start looking more human and complete.


Reading the Haythornthwaite entries on Russian Grenadiers, as well as studying the pics, was most useful. I believe I've now picked up some useful general info on Russian line infantry organisation, including some interesting and useful uniform info. It seems that the vast bulk of the Russian infantry will have looked much the same, with units differentiated by very minor details, such as colours and numbers on their shoulder-straps, and the two-colour combinations on the shako 'rosettes' (or are these their pom-poms!?). 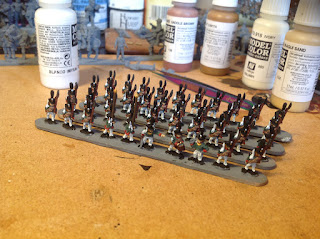 More detailing. Boy does it take time and effort!

I've recently bought two work aids, specifically for painting miniatures: a self-illuminating lamp-cum-magnifying glass, and a magnifying visor. The batteries in the lamp stopped supplying sufficient juice after 30mins use (so that may well go back to john Lewis!), hence my buying the visor. The visor is very good, but I'm a long ways from being used to using it. I did use it a fair bit whilst painting these - most the time atop my noggin as an expensive headband - but I figure I'll just have to get used to it at my own speed. 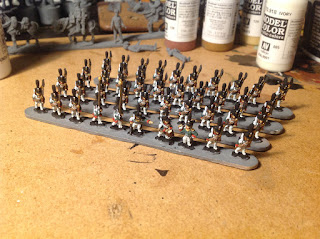 Day three (four, I guess, technically!?); knocked off one a.m. with figures looking like this.

When I think about the mountains of figures I have that need painting, it fills me with foreboding. How on earth will I ever paint them all? 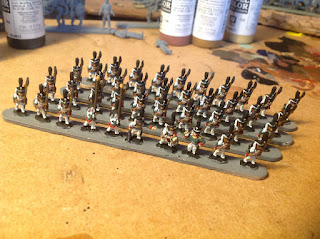 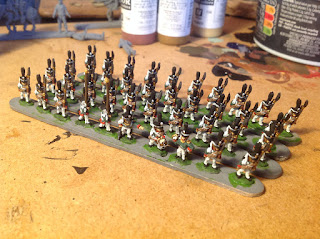 The two pictures above show the present state of these figures, as of Tuesday, May 31st, at two of the clock, post-meridian.

I quite like them in their current pristine, simple state. I recognise that shading is not on, with so many figures at such a small scale. Were I doing a small diorama, with just a few figures, I might really go to town on them. But given that I want to field large armies, I think it'll have to be a wash, at best.

Anyway, after four days of painting these buggers in almost any free time I could muster, it's time for some couch action, with a mug of hot Java and David Chandler's Campaign's of Napoleon, wherein he's currently guiding me across the bloody fields of Waterloo. It's splendid stuff. And I intend to post on the topic of tip-top trilogies ASAP!