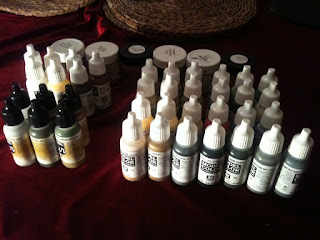 Left and rear, the acrylics I already had, by Vallejo and Howard's Hues. The large group at right, the new stuff. All Vallejo.

A few odd or even downright bad experiences with enamel paints recently [1] have lead me to decide to go for it on the acrylic paint front. I have bought a few acrylics here and there over the preceding years, but on the whole since resuming miniature figure collecting I've stuck with enamels.

But a few days ago, as some grey-green Revell enamel reacted strangely with the Tamiya dünkelgelb basecoats of a few of the German figs I'm currently working on, I decided to pop into the Ely model shop, and get properly tooled up with all the necessary acrylics to make a decisive change in medium. 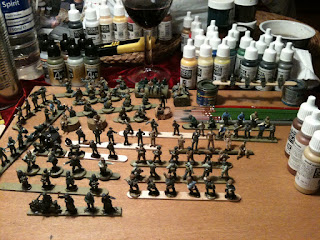 So, anyways, here are a few more pretty cruddy pics of the mass of German troops, now that I've started blocking in the base colours. This is all a bit experimental and work-in-progress. But I'm liking the Vallejo paints a lot.

I want some of these guys togged out in the highly attractive and very intriguing camo-patterns the Germans developed. Working these out, so they look right to me, is proving an interesting challenge. 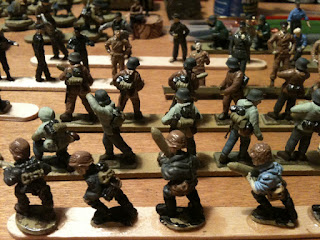 The foreground three rows here are all Nebelwerfer crews. If anyone knows the name of the brand of the figures nearest the camera, please let me know. I've forgotten who I got them off at whichever Salute it was a few years back! Rows two and three are Esci, rebranded as Italeri. Also visible are some Caesar and Dragon Panzer crewmen, and some Milicast SPG crew. 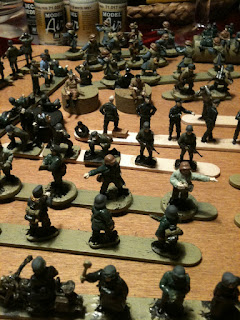 To the left of the previous pic are these guys. Too many brands here to list! But a lot more green in evidence. Some of the more basic figures, esp. the Airfix ones and similar, are getting the early-war look, with grey trousers and green jackets. But there are also plenty that I'm doing as mid- to late-war, a good few of whom will get some form of camo.

At the very rear are another brand currently unknown to me. Very chunky figs, but nice nevertheless, benefitting from good active poses. They appear to be in winter-sheets style get-up. But I've opted to paint them in grey greatcoats with camo smocks and helmet covers. I dunno, perhaps they might even get an unusual/unofficial (i.e pillaged from some non-German source) camo colour scheme - the Italian pattern, perhaps? - for a bit of interest.

On this latter thread, there's a great pic in the Blandford Uniforms of WWII book I'm using  for ref., of a German soldier in baggy Italian pattern camo. There's also a very interesting post on this topic here [http://souvenezvous44.blogspot.co.uk/2013/02/camouflage-petits-pois-contre.html?m=1], showing that this pattern was used in theatres other than Italy itself. 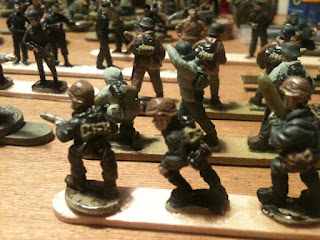 Even closer in on the Nebelwerfer crews. I think I took this so I could see their back-packs/gear better!?


13/5/'16 I worked into one of the camo schemes on some of the figures today, as pictured below. Still in the 'blocking in' phase... slowly but surely! It's hard work, this four-colour pattern.

There are a few subtle (i.e. barely discernible) differences in amongst these various groupings, where I've tried different combos of colours, but in search of the same overall look.

I do wonder how best to get the right effect, taking the small scale into account. Obviously the pattern is going to be much simpler, and is - I have to confess - very slapdash and approximate; I'm still essentially experimenting. The next step will be the various coloured dots. And then belts, heads, faces. Weapons, ammo, etc. 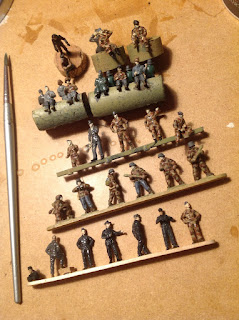 I really have no definite plans as yet for shading or weathering, etc. One thing's for sure tho': with the volume of figures I want to paint (and I really need to get back to my Napoleonic hordes!) I can't be too fussy. And I think with the advancing years my eyes tire quicker than they used to. Hey-Ho!

I decided to look into the subject of German camo patterns, and find out what it was I was about. I discovered that I'm gravitating to two particular types, one called (I think?) flittertarn, and another knows as Dot 44 (and numerous other things!). Pictured below is a reproduction jacket in the latter pattern, made by Epic Militaria. 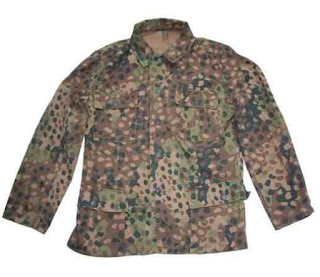 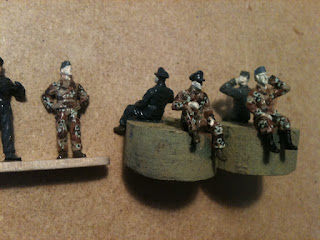 Above is a snapshot of my slow progress towards this pattern, on some of my Panzer crew figures. At such a reduced scale the pattern is both very random, and vastly simplified. But I think it's headed in the right direction. Needless to say, it's driving me, er... dotty.

15/5/'16 Today I went pretty dotty, painting little dots. Originally I separated out a bunch of figures with the intention of concentrating on some erbsenmuster  (the Dot 44 or 'pea') pattern. But then I started to work further on some figures I intend to have in splittertarn or splittermuster style gear.

In the pic immediately below the top row (Nebelwerfer crew) have splitter (splinter) patterns, the next row down (Panzer crew) are in erbsen or Dot 44. Then there are the Dragon Tiger Aces figures, in what was also originally meant to more Dot 44, but went a bit more 'Dijon Mustard', and now looks more like platanenmuster herbst, or the Autumn side of the 'plane-tree' pattern camo'. Not sure yet which way to go with the other Nebelwerfer crew, down at the bottom!! 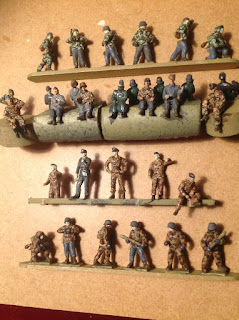 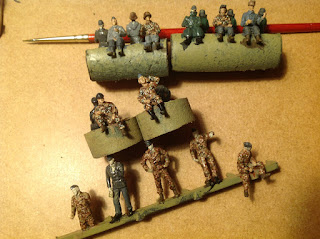 A slightly closer in view of some of the latest camo' work.

[1] It's odd: I only have two or three Revell enamel tinlets. I used one - a kind of grey-blue - on a lot of the helmets... and no probs. But when I tried the grey-green, for jackets, etc., the enamel reacted horribly with the Tamiya basecoat... dissolving it, in fact!
Posted by Seb Palmer at 23:16