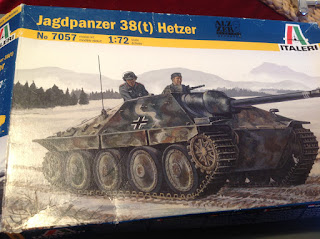 I'm not exactly sure why, but I've always liked the look of the little Hetzer tank destroyer [1]. This one from Italeri (is this another of their old Esci models, re-released?), has the late-war big exhaust muffler thing, and a remote machine gun on top. As pictured on the box artwork, there are also two crew. More on these guys later! 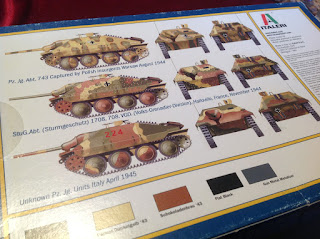 Three sets of camo and markings are shown on the back of the box [2], with decals included for each variation.

I built this pretty sharpish, after buying it for £5 at Partizan, in whatever free moments I could grab. And, despite one or two minor niggles, and excepting one or two rather more major gripes, I've enjoyed making this model. Minor niggles include such things as some parts (of the running-gear, in particular) not being sufficiently easy to align correctly, and the bits of spare track mounted on the body requiring their inner 'teeth' removing (a step not mentioned in the instructions), in order that the track retaining parts fit into their holes. 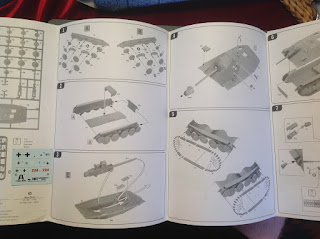 The instructions use photographs of the kit, and are serviceably clear. 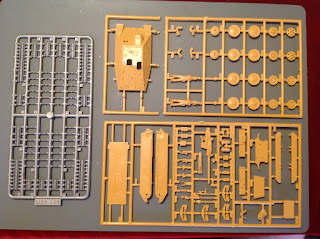 To be sung Elvis-style: 'You can do anything you want, just lay offa my two beige sprues!'

The first of the two more major gripes has to do with the extreme difficulty these particular (but perhaps also this style in general?) link'n'length tracks presented. I've tried doing what I did here before - and, as I recall it, with more success previously - whereby I lay the tracks out and glue them together in two segmented lengths, per track, before finally draping them over the running-gear, and adjusting the fit.

It's a pity 1/72 is probably too small a scale for tracks to be supplied as individual links that somehow  clip together, into a fully flexible track, as Dragon's 1/35 'Magic Tracks' do. The closest I've ever seen to such an arrangement is not, perhaps surprisingly, these link'n'length numbers, but the flexible one-part tracks made of normal styrene, thin enough to bend snugly around the running-gear, on Revell's SdKfz 7/1 (the kit with a four-barrelled flak gun on the back, which I posted about here). 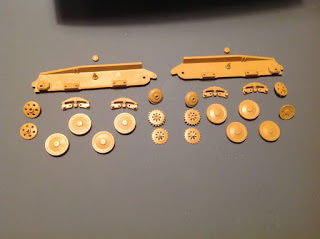 As is so often the case, it's the running-gear first. 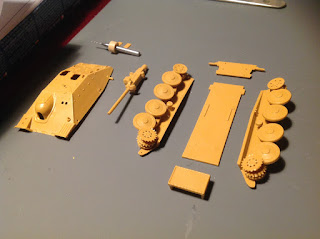 Then upper and lower chassis/body. Gun cleaned up, barrel drilled-out. 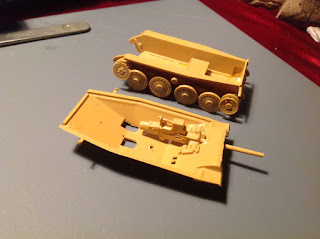 As can be seen in this pic, there's some detail on the gun that will be invisible when the model's completed! 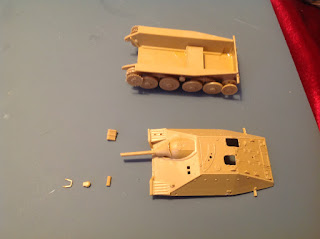 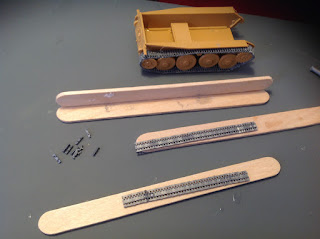 Gluing strips of the link'n'length tracks together, using lolly sticks to prevent them gluing themselves to the work surface, and to keep them properly aligned. 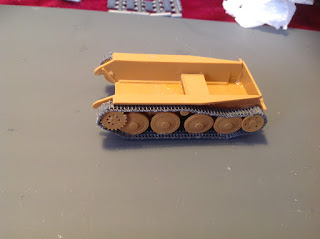 After excruciating agonies - continually dropping individual track links; extreme difficulty in properly aligning the links (on almost every plane/axis!) - the tracks in situ. 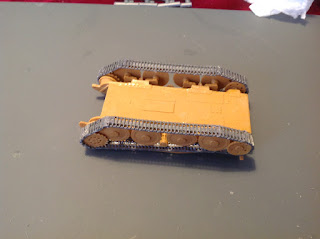 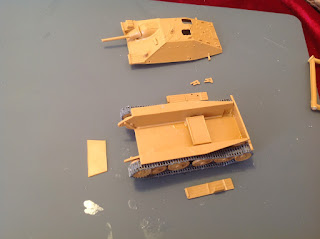 At this point I meant to spray the interiors, as I hoped to have hatches open, and crew inside. But, as the crew didn't fit... 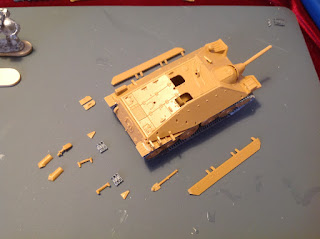 Nearing completion of the build.

The second of my bigger gripes is that the two Panzer crew figures supplied don't fit inside the hatch openings. Okay, they're not the greatest figure sculpts, but I would've liked to have used them in this Hetzer model nonetheless. Instead they'll go in the spares box for use elsewhere. I tried to adjust the angle of the binocular holding arm of one of them, but I didn't achieve the result I was after! 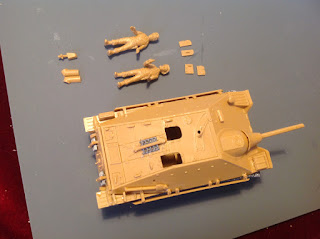 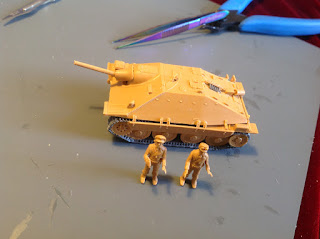 I actually really like the crew figures, although, out of the vehicle their poses make them look rather like zombies.

Like all but one or two of my WWII models, this joins the growing armament awaiting proper painting. I finally have a decent dual-action airbrush as well, so it's just a matter of finding the time to get started using it!

My conclusions regarding this particular model? Well, it looks, judging from the figures primarily, like quite an old kit, but it's still pretty cleanly moulded, and - aside from the fiddliness of the tracks - goes together pretty well.

A nice ref. pic. of the real thing. It'll be fun trying to emulate that rusty patina!

It is a pity the crew don't fit. Although, having said this, it might be possible to assemble them in such a way (stick the torsos through the upper casemate from below, and then glue on the arms!?) as to have them inside the vehicle.

I've docked thus kit one balkenkreuz on account of the tracks, and another 1/2 cross 'cause the figures won't fit inside. But it's still fun to build (tracks apart!), and makes a nice looking addition to my growing fleet of WWII German armour. 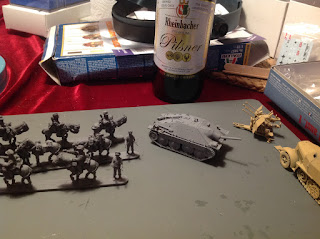 On the workbench, amidst other ongoing stuff, primed in grey.

So, despite the relatively low score 'be given this model, I might well build it again one day. Although if I do I'd prefer to source tracks elsewhere. Oh, and the crew might have to go under the knife, for a bit of waistline weight-reduction surgery! But I think I'll be more likely to try a few from other brands first.

[1] I suspect the reason is something to do with pics of the vehicle in Panzer Colours, a book that fired my imagination and engaged my enthusiasm on this topic as a kid.

[2] The black and white instructions include colour and marking info on four vehicles. I haven't checked, but I assume that's the three shown in colour on the back of the box, plus one more!?
Posted by Seb Palmer at 12:08