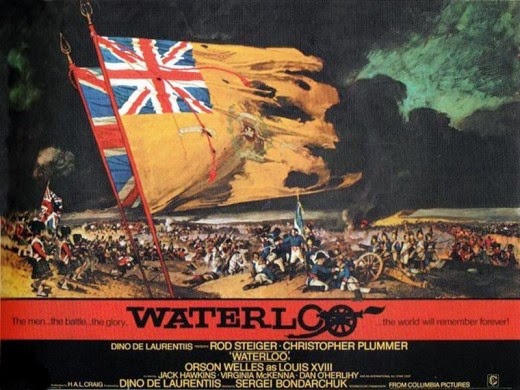 Having watched this film at least six or seven times now, I thought it was high time I took the opportunity of recording and sharing some thoughts about it.

First off, Napoleon is a subject that has attracted and yet frustrated the movie industry for many years. From Abel Gance's experimental silent-era flop, in which he blew his entire budget on the first of what were meant to be six instalments, to Kubrick's abandoned movie project, abandoned, apparently, because the film under review in this post didn't do as well as had been hoped.

Directed by Sergei Bondarchuk (his epic Russian version of War & Peace, in which he also starred as Pierre Bezukhov, made him perfect for this role) the film starts at sea, as Napoleon leaves his Elban exile and makes a dramatic return to the throne of France. His triumphal march north and resumption of power is delivered in a very quick/truncated manner, swiftly followed by the realisation that war will be inevitable and unavoidable (there's a great scene relevant to this thread with Boney steaming in the bathtub!).

Shortly thereafter French troops cross the river Sambre into Belgium, and before you know it we're amongst the strutting peacocks and popinjays at the Duchess of Richmond's famous ball. 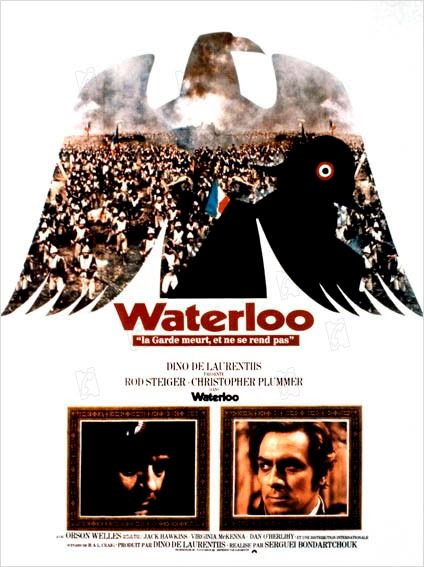 A rather different poster: for the French market
it's an Eagle silhouette, rather than British flags! 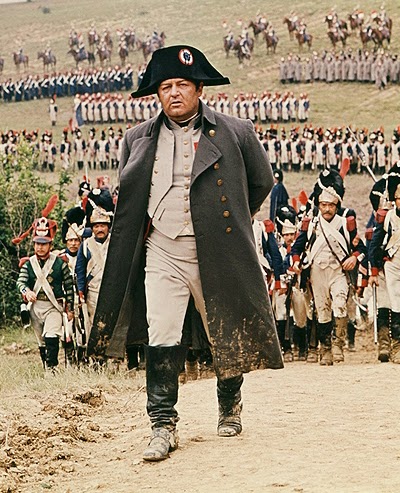 Napoleon advances on foot to meet Ney's 'Royalist' troops:
Napoleon - 'Soldiers of the fifth. Do you recognise me?
[pause] If you want to kill your Emperor? Here I am.'

Müffling arrives at the ball, Wellington makes his plans (and we get the famous 'humbugged' lines), and afore ye know it, the troops are deploying on the battlefield.

The movie dutifully (and spectacularly) covers most of the major actions: the opening 'feint' against Hougoumont, D'Erlon's massed infantry attack, with the British/Allied cavalry charge riposte, many bombardments of the batteries (Bondarchuk seems to have had a 'thing' for artillery scenes!), the French cavalry washing around Allied squares, the arrival of the Prussians, and the final attack of the Guard, etc.

The scale of the production is truly amazing. Legend has it that for the duration of the filming of the battle scenes the multinational multilingual army assembled for the film was amongst the largest 'standing armies' in Europe. The bulk of the extras were Russian soldiers, and troops were drilled according to contemporary 'evolutions'. The battlefield was recreated pretty meticulously, in the Ukraine. 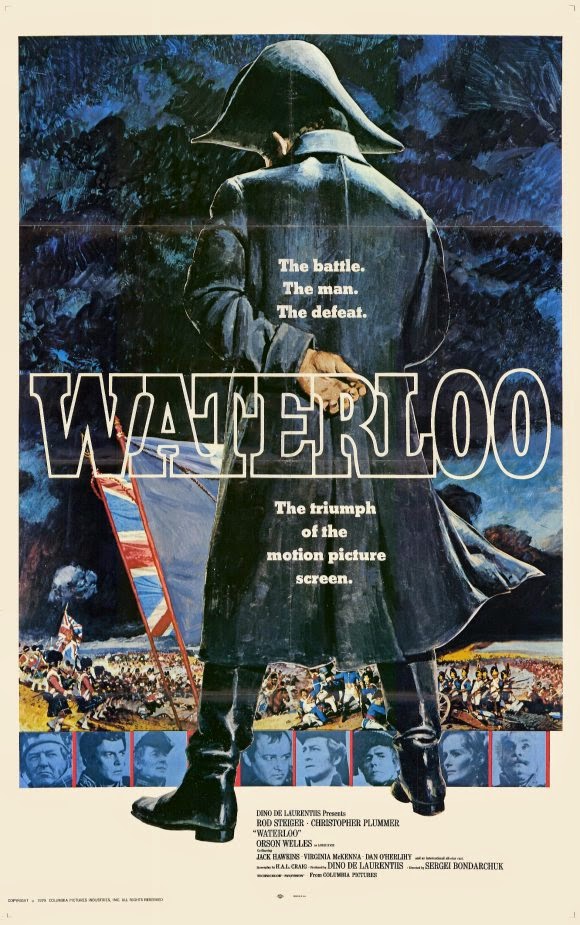 Yet another different poster in English.

The cast is pretty stellar; Rod Steiger's Napoleon is actually very good. I must admit I didn't like him in the role instantly. But the more I watch the film, the better I think he is. Christopher Plummer is great as a very charming if somewhat clichéd aristocratic Wellington, and many of the supporting roles are well cast/played (the actor playing Blücher looks exactly right!).

Bondarchuk's direction is, on the whole, excellent, and clearly no expense was spared staging and filming the amazing battle scenes. Appropriate use is made of contemporary martial music, and the stirring menacing score, which helps build tension as we approach the battle, is also worthy of mention.

Sadly, despite all that it has going for it, the film didn't do as well at the box office as was anticipated, and that's not helped Napoleon reach the big screen (or little screens either, for that matter) in the years since. How different the situation is on the literary front, where there's a seemingly inexhaustible Krakatoa of works that continually belch forth on this perennially popular subject!

Would that someone with pots of of money might take the whole era on! My dream team would be: Spielberg, Jackson and Scott, sharing roles as executive producers, and  poss even as co-directors, with Scott (his film The Duellists is one of the most beautiful depictions of the Napoleonic era) as production designer. And they could use Kubrick's researches, so he could get a credit as the ghost in the machine!

On the topic of historical accuracy, here's a link to a site dedicated to listing movie bloopers and the like, which has an entry on Waterloo. Near-miss trivia nuts might be tickled by the fact the movie is catalogued as entry 1813. What a pity it couldn't have been 1815! There is also a list of historical inaccuracies at the Wikipedia entry for the film. And the website TV Tropes has a slightly different angle on this whole area, which is interesting.

Given that all this info's already out there, I'll leave it - more or less - at pointing people towards those links. I will, however, mention just one or two things: the famous ball on the eve of the battle was held in a coachmaker's barn, so probably didn't look quite as grand as the candle-lit ballroom of the film. In attempting to recreate the famous painting of the charge of the Scots Greys (Scotland Forever, 1881, by Lady Butler), we're given a very cinematic vision of a cavalry charge. Woe betide any plucky highlander foolish enough to try hanging onto the stirrups of those thundering steeds! And lastly, given how much artillery action we're treated to, some consistency would've been good; as it is the cannons sometimes recoil, and sometimes don't.

But, for me, although there are many fine moments, there's one single shot of such extremely evocative magnificence - French troops of all the main arms, cavalry, artillery and infantry, cross a river (I assume the Sambre?) in the rain; the camera starts with an aerial panoramic view, pans across the bridge, and ends on an under the bridge view of troops fording the river - which snuffs out any such quibbles. To see the military splendour of the age of the 'big battalions' so wonderfully realised is, frankly, priceless. 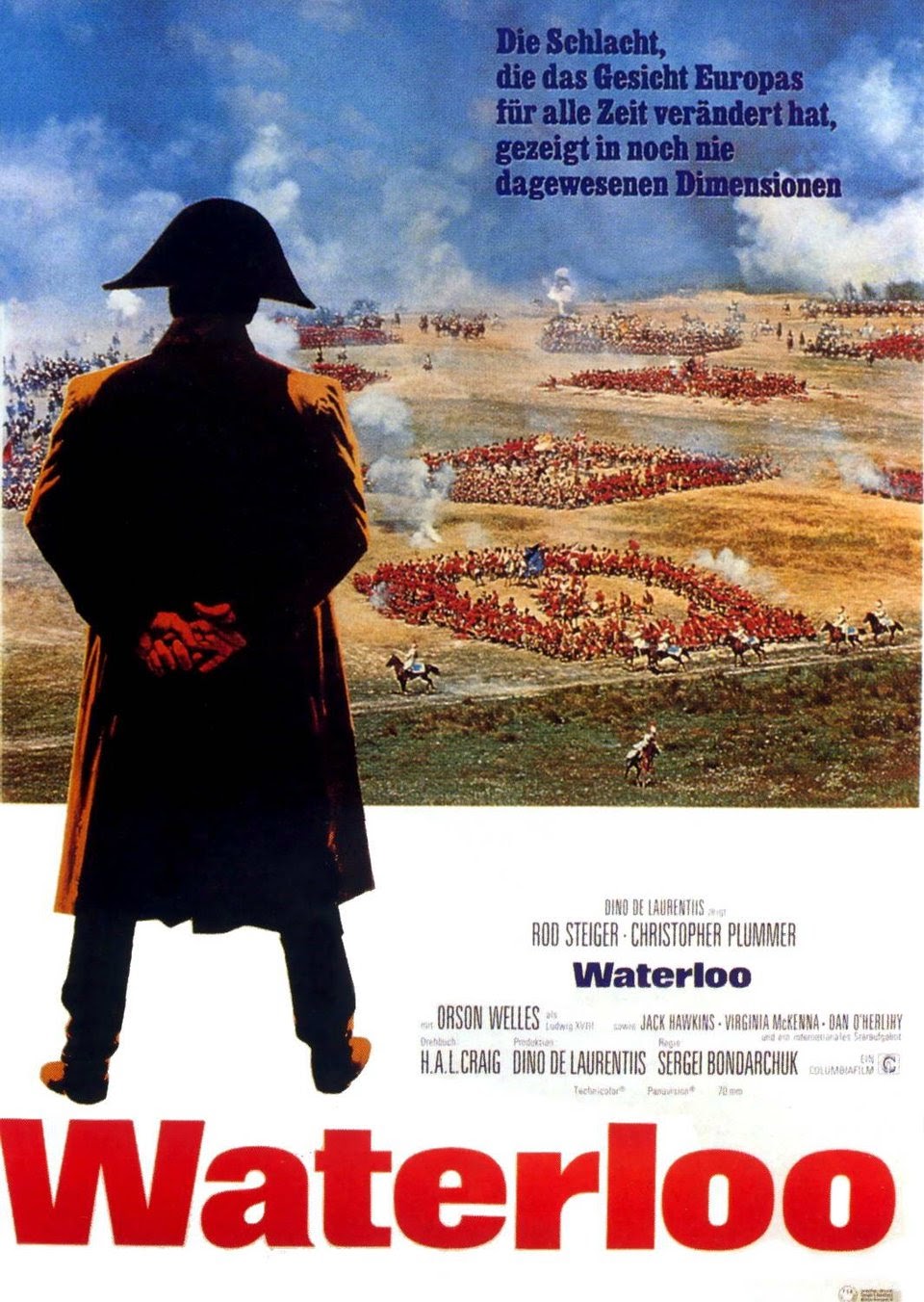 And another poster variation! This one for
the Prussian, sorry, the German market.

There has also been speculation about whether a longer version of the film exists, with some suggesting (over at TMP, for example), that there may have been a four-hour long Russian 'director's cut'. I took the bit between my teeth, so to speak, and wrote via email to Mosfilm, and received a rather disappointing reply from a lady named Elena Orel, of the Mosfilm International Relations and Distribution Dept:

'Please be advised that Mosfilm holds the right to the film WATERLOO, 1969,
director Sergey Bondarchuk, for Eater [sic] Europe territories. I should inform


you that there is only one version of this film of 2 hours 17 minutes.'

I don't hold that this is necessarily a final and definitive end to the quest for a longer version [1]. But it doesn't exactly fuel hopes! 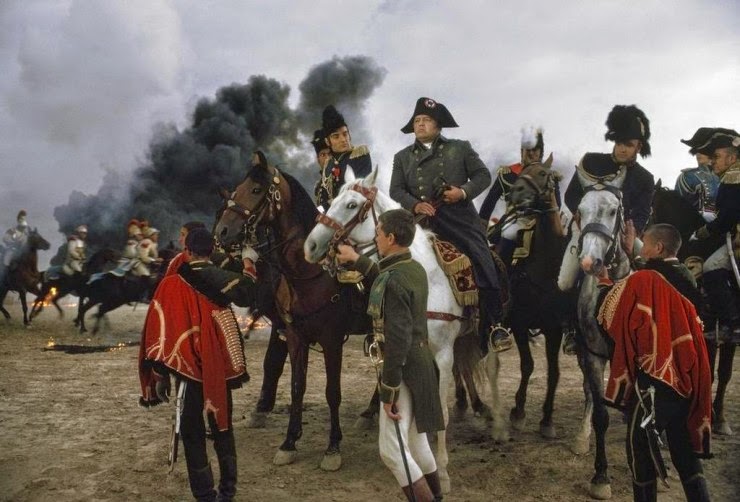 One of the intriguing publicity stills that suggest certain scenes were cut.

It would seem that there certainly were scenes that didn't make the final cut, some of which exist only thanks to press-photos. Thanks to the TMP discussions on the topic I can post a link here to Deadhead's gallery of tantalising stills of some of these potential lost scenes.

The picture I reproduce above, showing Napoleon on horseback, comes with an interesting anecdote; Steiger was terrified by the skittishness of the white horse he was sat on. Justifiably so, as it turned out, as it bolted with him still in the saddle! This in turn links neatly to one of the worst aspects of the film, which are the several scenes where certain characters, e.g. Steiger's Napoleon, or Michael Wilding as Sir William Ponsonby, are filmed clearly pretending to ride a horse, very unconvincingly.

More photos like the ones linked to above,  including several of the same, can be viewed here: David Hurn's Waterloo film production photos (1969)

A Spanish language poster for the film.

And finally, try and avoid the 'pan and scan' version of this beautiful film, which spoils the visual glory somewhat by zooming in and slipping and sliding around the picture space. I don't know how you could tell this in advance. I only know that my version (part of a four film Orson Welles set*) is the original and best format, and that a version I watched at a pal's was the mutilated one.

* I'm glad they bundled this film in with the other movies in that collection, in which Welles is the main star, despite his role in Waterloo being little more than a cameo!
-----

[1] In my researches for my monthly classic album column, Recycled, for Drummer magazine, I often found that major labels had little or no idea about some of their older and more obscure catalogue items. Mind you, Waterloo is hardly obscure, even if it is now quite old (it's only very slightly older than me!). But what I'm getting at is that Mosfilm may be wrong, and there may be a longer version out there somewhere, even if not in their archives. That was how Kevin Brownlow was able to eventually cobble together Abel Gance's Napoleon, thanks to prints in the collections of unofficial sources.
Posted by Seb Palmer at 13:58