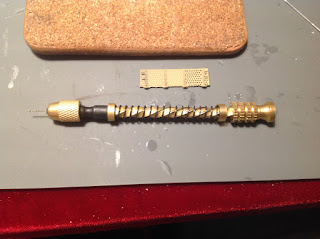 Perhaps the heat (hah, right!) is getting to me? Anyway, yesterday I decided to embark on two fairly random bits of model making madness. 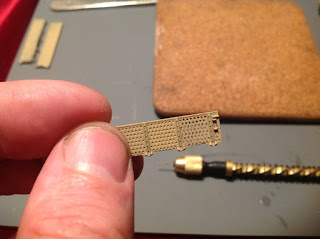 The first was to take a leaf from a fellow modeller's book*, and drill lots of tiny holes in the side panels of my Revell Sdkfz 7/1. 0.5mm is the appropriate diameter, but my preferred micro drill bit (mit ein grosser shank) is broken. So I used a bit from another set. And it wasn't long before I'd broken that as well! Dang nab it, I must gets me some more 0.5 bits! Perhaps a whole bunch? 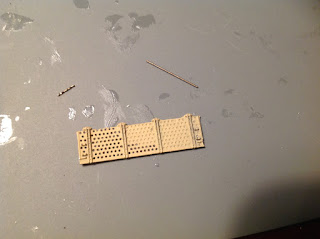 So, that particular bit of rod for my own back lunacy is now on hold. 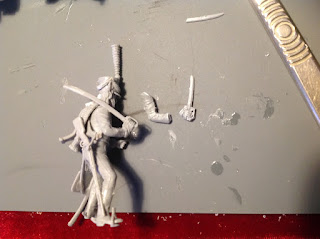 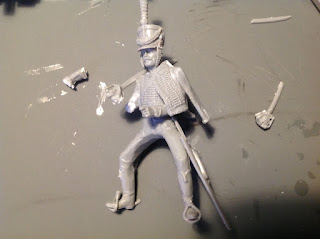 The second undertaking was some drastic Frankenstein style limb swapping, on the 54mm French Nap Hussar I recently bought/built. I realised, some time after cementing the dashing beau sabreur, that I had mismatched the arms; his left arm was dolman, his right pelisse (avec le furry wrist trim).

I tried to gingerly pry his whole arm off, but it looked like it'd simply snap orff in the wrong area. So I got a spare arm with the right apparel, chopped out the appropriate part (forearm to wrist) - flying by eye and seat of pants - and repeated this process on monsieur le sabreur. 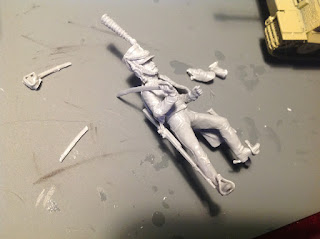 I'm no Baron Larrey, but, almost miraculously, esp. so given my impulsive manner of going about this, without bothering to measure, etc., the 'new' arm slotted in pretty much ferpectly. My little bit of plastic surgery was a success!

I've subsequently base-coated the rider and his mount, ready for painting.