An older more dramatic poster for the film. As misleading in its visual content as the film's title! 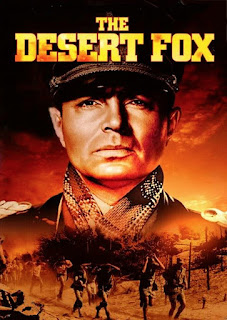 A more contemporary DVD cover (same as mine). Less dramatic, but more in keeping with the content.

This is an odd film. For starters, the title is misleading. Only a very small portion of the movie is set in North Africa, where Rommel got his nickname of 'Desert Fox'. Most of the story unfolds in Europe, during the defence of France after D-Day.

James Mason is excellent in the title role, portraying Rommel as a suave, gentlemanly professional soldier. Also worthy of note is Leo G. Carroll, as von Rundstedt, who also portrays his character in a light many modern viewers might find surprisingly sympathetic.

The film is based on the literary and historical detective work of Desmond Young, who also portrays himself in a cameo role in the film, as a prisoner of war who gets a glimpse of Rommel at one point, and believes he owes his life to him. I won't go into the details, as I don't want to spoil it for those who haven't seen it. 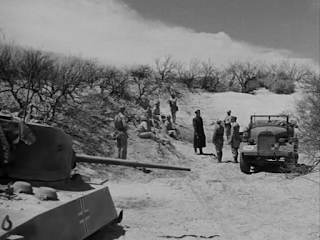 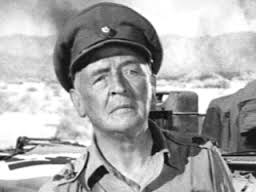 Author Young appears in the film as himself. 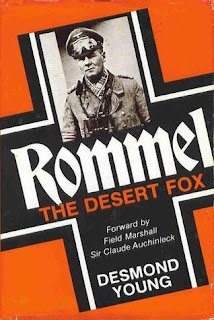 One of the more striking cover designs for Young's biography.

Young became intrigued by the mystery surrounding Rommel's demise, and decided to investigate, which eventually lead to the publication of a book, and this film is built upon that book. The film itself starts with a brief depiction of Operation Flipper, a 1941 commando raid, the purpose of which was Rommel's assassination. [1] 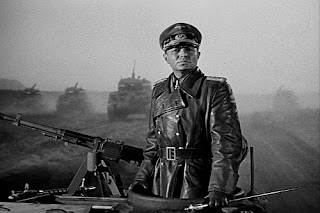 One of several instances where footage shot for the movie is either superimposed over or intercut with stock newsreel footage from the war itself.

Most of the combat portions of the film, save only a flashback coda at the end, utilise real WWII footage, which, whilst adding authenticity, looks a bit weird to the modern eye. This was in fact quite a common practice at the time. But here it's handled a little heavy-handedly, in my view, with the result that it makes the transitions between such segments a bit clunky, and disruptive of the narrative flow of the dramatic element of the film.

Like so much to do with the war, and perhaps especially to do with Hitler and Nazism, much relating to the 'facts' are still hotly debated, and parts of the scenario this film is predicated on are contested, of particular relevance being the issue of whether Rommel was involved in the 20th July bomb-plot. This event, when Stauffenberg succeeded in placing a suitcase bomb in the 'Wolf's Lair', is depicted in a scene in the film. 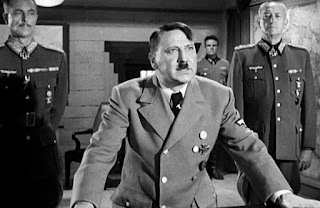 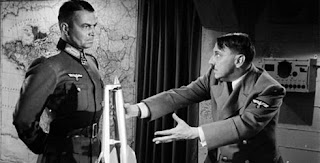 This scene is cut from the version I watched, but it's content is alluded to.

This is a good point at which to note that Luther Adler's portrayal of the Führer is pretty convincing, even in its very melodrama. [2] There's a very interesting scene - whether such a scene took place in real life I don't know - where Rommel meets Hitler, and attempts to make him see reason regarding the situation on the crumbling western front. Hitler continues to place his apparently unshakeable faith in himself, and the new V-weapons. It's a fascinating scene.

It was widely believed at the time that Rommel died of wounds received when his staff car was strafed. This film portrays a very different end to the general's career. I will, not wanting to spoil it, leave it here without giving too much away. What I will say is that this film's dramatic power crystallises around the ending, and is quite moving. 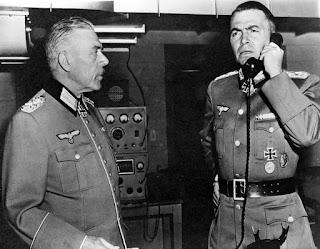 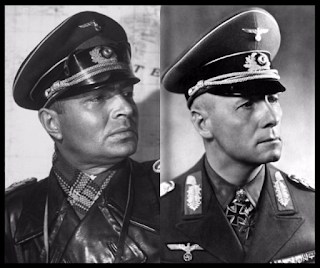 Mason and his subject.

Interestingly it appears that Young's desire to clarify the story of Rommel has, in the longer term, failed. The 'Rommel myth', something this film is credited as being a key contributor towards, remains contested. It's also said of this film that it helped contribute to reconciliation between former enemies, by depicting some Germans as 'worthy foe', as opposed to caricature Krauts, Huns, Bosch, or whatever.

The Desert Fox doesn't explain why Rommel had such a good reputation as a general, that's taken as written, and pertains to a period prior to that covered in this biopic. What it does give is a portrait of the human side of a man struggling with his professional duties and his conscience, in a very tricky and unenviable position. And it's in respect of that theme that the film is most interesting and successful, whatever its relation to the truth of the events depicted. 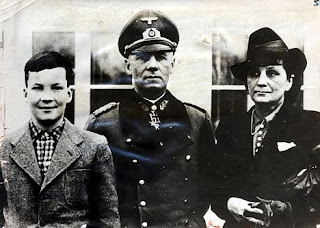 Rommel with his wife and son. 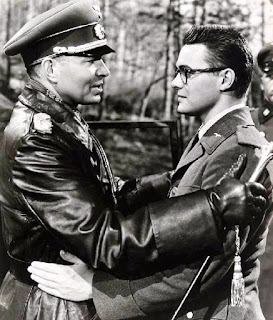 Saying goodbye to his son in the movie.

[1] Movie trivia fans might be interested to note that the commando raid is lead by Dan O'Herlihy, in an uncredited role. O'Herlihy is better known to me as General Ney, in Bondarchuk's Waterloo.

[2] Adler, an American actor, played Hitler twice; here and in a film called The Magic Face, also, coincidentally, filmed in '51. Adler's name sounds both strikingly Germanic, and yet totally Jewish. And he was indeed Jewish, performing in both Englsh and Yiddish, and best remembered in the US for his Broadway appearances in Fiddler On The Roof!
Posted by Seb Palmer at 08:18