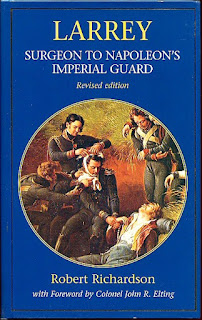 "The most virtuous man that I have known." Napoleon, in his bequest to Larrey.

Napoleonic warfare, for all the martial splendour of the peacock uniforms, was a sanguine business. As armies, battles, and wars became ever larger, so did the 'butcher's bill', particularly as the role of massed artillery grew, pitching flesh and bone against shot and shell.

It seems unsurprising now that at some point in the 19th Century the colloquial term sawbones came into use to describe surgeons. It's perhaps only surprising that the term seems to have originated after the Napoleonic wars, as it quite literally describes one of the most common  medical battlefield operations of that bloody era.

Larrey in action on the battlefield. 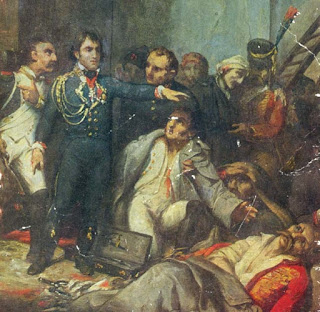 Larrey conducts operations in a 'casualty evacuation' station near the front.

The career and life story of Dominique Jean Larrey is backlit by these epic convulsions of 'military glory, that attractive rainbow, that rises in showers of blood' [1]. Indeed, Larrey was constantly up to his elbows in the gore of Napoleonic battlefields, frequently working, as in the upper of the two paintings above, on the field of battle itself, a fact also colourfully attested to in several passages in this excellent book. [2] 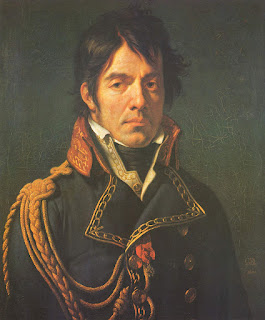 Larrey, as painted by Girodet. 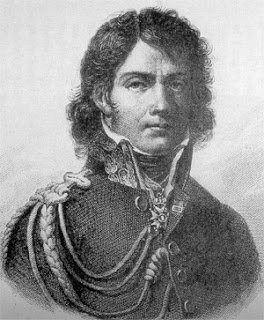 But the battles themselves were, in a manner of speaking, only half the battle. Not only did Larrey and his historic and innovative flying ambulance service daily brave death on the battlefield, seeking to restore life where others sought to take it. But they also had to contend with a military administration that treated them with barely credible contempt, rather as the casualties of war were themselves largely treated. A nuisance and inconvenience, an irritating distraction, or even obstruction, to the job in hand. 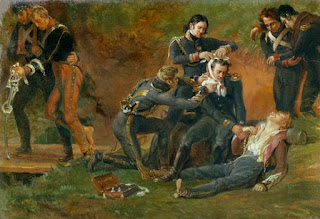 Larrey at work at Borodino, by LeJeune.

When a horse trod on a wounded man on the field of Borodino, one of Napoleon's entourage said words to the effect of, 'never mind, it's only a Russian', Napoleon famously replying 'on the field of victory there are no longer enemies, only men.'

Whilst this, and Napoleon's interest in the medical services themselves (both generally and in his adoption of Larrey's initiatives) redound to his credit [3], sadly the norm was generally more in line with the original callous comment. Injured soldiers more often than not ceased to be treated humanely. They had, in fact, become less than men.

Richard Robertson, himself a doctor and medical man, has written a fascinating account of Larrey's life. The story is especially good because Larrey's career maps the whole period. Born just a few years before Bonaparte, his career in military medicine began some years before he first met his future emperor. That first meeting occurred at Toulon in 1794, prior to the young general's dizzying ascent to pre-eminence.

Although Larrey's memoirs include material on his pre-Bonaparte adventures, Richardson, having given a sketch of his background and early career, only really starts to get properly stuck in with the expedition to Egypt. From thereon in Larrey marches with the Guard, almost always near his emperors' side, through many campaigns, right up to Waterloo.

From Egypt and the Holy Land, through the patchwork of German states and nations, to Poland and Russia, Larrey was there. And his main enemies throughout all this were not the enemies of France, per se, nor even the damage wrought by war, but disease and the administration. 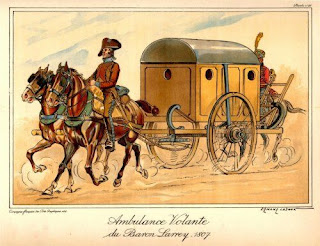 Larrey got the idea for flying ambulances from the impressive manoeuvrability of French horse artillery.

One criticism often levelled at Napoleon is that he didn't allow his subordinates enough independence. Well, I won't enter into that debate here as regards his military deputies. But it's clear that Larrey always stood by his principles, and would do so even if it brought him into conflict with vested interests. This was a big part of why his fascinating and inspiring passage through life was a rather stormy one. [4] 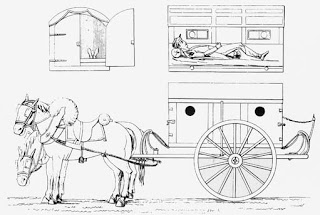 Surgery was his expertise, and both he and the French as a whole led the field in terms of successful battlefield surgery. The tales herein of the contrast between the old methods and the improvements of Larrey and others both chill and quicken the blood! In terms of the survival rate after amputations, the innovations of Frenchmen, Larrey amongst them, were demonstrably superior to older traditions. Nevertheless, adoption of new and better techniques proceeded with painful slowness, military medicine being a very conservative field.

In addition to his famous flying ambulances, and his intense and principled dedication to seeing medical services better administered and provided for, another of Larrey's great contributions, once again related to his strict principles of always doing the right thing (and yet another that could potentially ruffle feathers), was his method of seeing patients in order not of rank or status, but the severity of their needs. 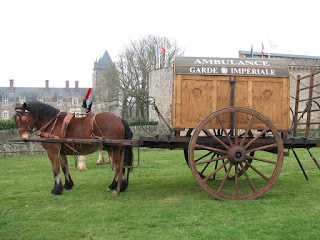 But if coping with appalling battlefield injuries was tough, dealing with disease was even tougher, as they fought an invisible and unknown enemy. Indeed, Larrey would himself come dangerously near death's door, contracting typhus at the tail end of the 1814 campaign. And whatever the practical medical issues were, there was always the administrative system to fight as well. Medical staff didn't hold military rank, and consequently were at the mercy of the often corrupt commissariat.

Napoleon was notably quicker to professionalise and militarise the army trains, which had formerly been a separate civilian adjunct. He did also eventually look to do something for the medical  corps, but it was too little, too late. French military medical services were not, in fact, to be properly organised until the closing stages of WWI! [5] 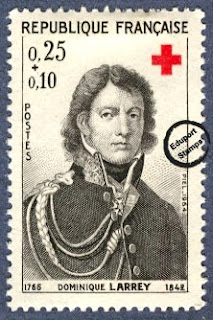 Larrey, immortalised on a stamp.

As well as having the grand sweep of the entire period, there's plenty of anecdotal detail: from the occasion on the campaign in Egypt and Syria, when Larrey operates on an Arab entertainer and his pet monkey, bringing tears of gratitude from the former and frequent scampering, leaping hugs from the latter; to the time he saves the life of Blücher's son, during the 1813 campaign, an act that found the inveterate enemy of France saving the surgeon's life in turn, when he was wounded and made prisoner after Waterloo.

Larrey did achieve fame and recognition in his lifetime, but it was a rough ride, and he was frequently sorely tried. Not just by the campaigning itself, but by rivalries, and fortunes that fluctuated between such highs as being made a Baron, given a home, and at several times being either honoured or  otherwise rewarded, to being passed over, intrigued against, not getting paid his dues, or - quite incredibly - being billed for the loss of equipment in Russia! [7] 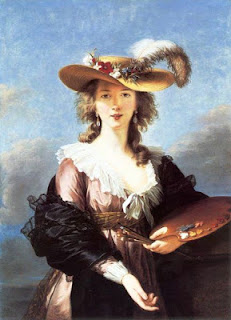 A rather poor image, but good in that it shows an ambulance and numerous medics in action.

Fortunately for all of us, like many in Napoleon's orbit, Larrey kept a journal, which he published, in part, during the Napoleonic era itself. His correspondence also survives, much of it having wound up in the Wellcome Institute archives. From these and other sources Richardson has assembled a vivid and moving account of a truly remarkable life, lead by a truly remarkable man.

Larrey was frequently called away from the wife (see above pic) and children he loved and treasured, to far-flung places where he carried out a very virtuous and very challenging occupation, often for precious little thanks, and frequently in great personal danger. But despite seeing so many others die on campaign, including such brave warriors and close personal friends as Desaix, Lannes and Duroc, Larrey himself was destined to outlive the adored imperial master whose friendship, respect and benevolence he earned. 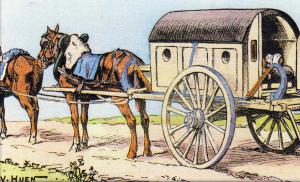 Another view of the two wheeled ambulance. 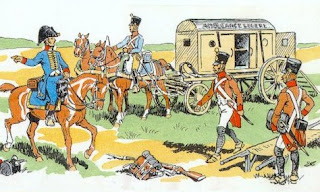 A larger four-wheeled ambulance. This an illustration, I believe, for a Historex model.

And unlike the unfortunate Marshal Ney, Larrey even managed to weather the two monarchical restorations, although after the second his prospects were, for a while, rather shaky. But his fortunes would rally several times in later years.

After Waterloo he could easily have moved abroad - folk in high places, from the ruler of Brazil to the Czar of Russia, offered him prestigious posts - but he preferred to stay in France, where he lived long enough to see Napoleon return one final time, to the mausoleum of Les Invalides.


The way Larrey's story ends - I won't spoil it by giving it away - is typical of his life, embodying action, principle, duty, etc. And like his whole life story, it's also really quite moving.

----------
An English translation of Larrey's memories can be read here

[2] One of the best involves a shell going off directly overhead as Larrey is at work. He doesnt even look up! With miraculous good fortune, nobody is injured, but Larrey's hat is peppered with holes

[3] Some of these anecdotes very much run counter to the 'black legend' of his callousness, so assiduously cultivated by his enemies.

[4] There's an excellent story told here about how he saved 48 soldiers with hand wounds - who stand accused of inflicting them upon themselves and are sentenced to death - daring to stand up to all those, right up to the Emperor, who are keen to make an example of these unfortunates.

[5] A British surgeon who tried to persuade Wellington of the benefits of Larrey's innovations, the flying ambalance in particular, found even shorter shrift than Larrey did in France!

[7] The scenario was complex and tortured: Larrey's pay was significantly in arrears, and it appears that those with power in the administration decided that billing Larrey for the losses in military medical equipment that occurred in Russia, during the ill-fated 1812 campaign, would allow them not only to save on paying him, but to get money from him. Bloody typical pen-pushing, money-grubbing bureaucrats. Leeches!
Posted by Seb Palmer at 21:54