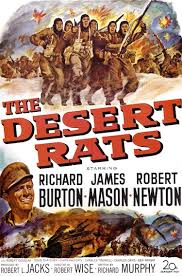 An older poster for the movie. 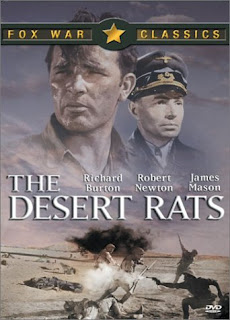 My DVD has this father more sober cover.

Released just two years after The Desert Fox, The Desert Rats, despite seeing James Mason reprising his role as Rommel, and despite also featuring stock newsreel footage of actual combat, is an entirely different kettle of fish.

This movie actually stays in the sandy wastes of North Africa. Well, sort of. Tobruk and environs mainly, actually! And it's a lot more of your typical action-based war film as well, whereas Rommel was more a character study.

A sandstorm arrives, reducing visibility. Just before the Germans attack. 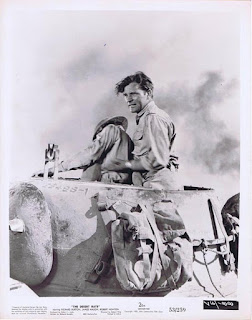 Richard Burton stars as a British Captain named MacRoberts, given charge of a bunch of 'green' Aussies, freshly arrived in the theatre of operations. Which means, essentially, Tobruk, and the defence thereof. MacRoberts is a tough nut, twice decorated; a no nonsense, down to business kind of fellow.

At his first meeting with his new charges he discovers among them an old schoolteacher of his, Tom Bartlett (Robert Newton), now a drunkard. Their troubled but nonetheless close relationship is one of the key ones in the film. Eager for action, he sees that the men are soon blooded, along the way commending actions he approves of, and punishing those he doesn't.

Some of his troops like him, some don't. His decision to court-martial a soldier who attempts to save their own Captain isn't popular. His old schoolmaster remonstrates with him, revealing a hitherto secret instance of his own leniency towards MacRoberts, back at school. How will MacRoberts react? 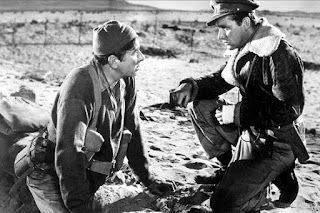 Bartlett, most likely confessing his cowardliness to 'Tammy' MacRoberts.

The film has an excellent cast, and a good energetic action-filled pace. It's filmed in a suitably sandy and dusty location, and - apart from obsessive military history nuts like us, who notice and disapprove of Allied materiél being passed off as German [1] - it all feels just about right. Even the sock footage is better integrated (though still easily discernible) than it is in The Desert Fox, largely because a lot less is used.

After initial success in repelling Rommel's first major attack, the remainder of the action centres mostly around two particular events, as well as following a more general plot trajectory that includes other minor actions. The first of these more major actions is a Commando style raid behind enemy lines. The second is the defence of a strategically important forward outpost east of Tobruk. Both of these main scenarios, the first being the big central set-piece of the film, the second a kind of conclusion, are excellently handled, such that you really feel involved in the men's plight. 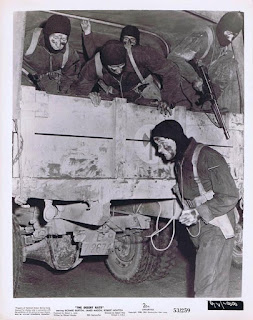 Disembarking for the commando action. The funky looking italian trucks are actually American! 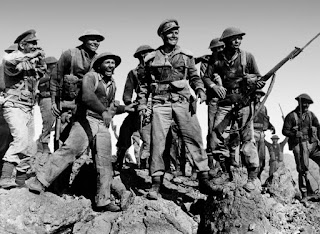 I do like Burton's jacket, especially those great big woolly collars!

Mason's reprise as Rommel is quite a scanty affair, amounting really to a few cameos. But he has such presence and charisma when he is onscreen, just as, if we are to believe the popular tales, Rommel also possessed, that this doesn't matter. [2] And so too does Burton. Their paths inevitably cross, the scenario in which this happens being a rather excellent and intriguing one that I won't spoil for those who haven't seen it.

I haven't looked into whether this is in any way based in real events as yet. But, regardless of whether it is or it isn't, it's certainly a cracking good war film. In terms of sheer balls out fun, it's, er... the nuts!

[1] Donning my anorak: if I'm not mistaken the Desert Rats were a British fighting force, whereas these guys are the Australian 9th Division.

[2] There are two, no, make that three, notable differences in Rommel's appearances in this film: first, he's hardly in it; second, in most his scenes (and German scenes generally) the characters, including Rommel, speak German (and my disc appears to have no subtitles); thirdly, in the main he's not portrayed so sympathetically as he is in Desert Fox.
Posted by Seb Palmer at 16:55