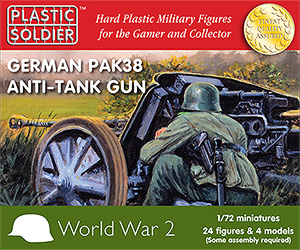 This small box from Palstic Soldier Company has eight sprues. Four each of two sets. One dedicated to the guns, and one to the crews. The guns can be built either as Pak 38 50mm, or Pak 38/95 75mm weapons. Rather strangely, perhaps, the cover of the box shows a gun with the wheel of a 75mm gun, but the muzzle of a 50mm gun.

I wouldn't have known this offhand. And indeed, the only reason I do is because, whilst the box I bought from my local model shop came with no instructions, I was able to find them, as PDF files on PSC's website. It's thanks to the online instructions that I can deduce the above, re gun types. Maybe it doesn't matter anyway? Perhaps both types of gun could sport either type - spoked or solid - of wheel? 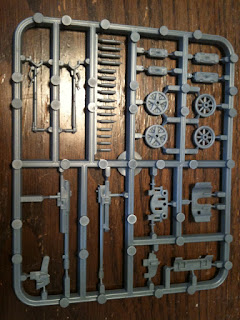 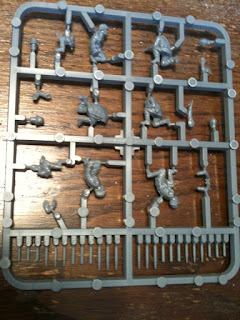 I must confess that I was surprised there were no instructions in the box. What would someone without the internet do? And even the online PDFs aren't as informative as they could be. I had to deduce a few things about construction by using a bit of common sense, whilst dry-assembling various parts.

Quality of moulding and casting are superb. There's almost no trace of mould-lines, and pretty much no flash at all. Nor are any parts marred by ejector pin marks or other oddities. So snipping the parts off the sprues and cleaning them up for assembly is straightforward. Design and fit of the parts is also excellent, especially in regard to the guns. 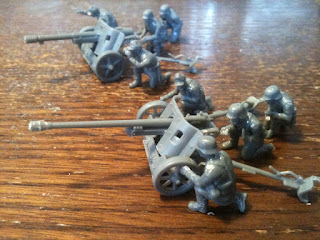 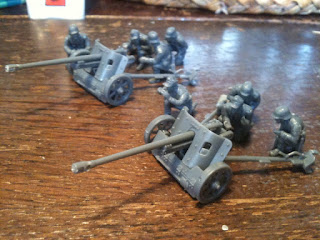 These build into simple, robust models, ideal for wargamers. I chose to hollow out muzzles, which is tricky and requires a delicate touch. I didn't go as far as drilling all the tiny holes in the 75mm muzzle though! (I was sorely tempted!) I also left the trailing arms unglued, for adjustability purposes. The guns aren't designed to move either laterally or transversely, as they are fixed.

At £12.95, they work out at roughly £4.25 per gun and crew. There are enough figures to make four six-man crews. I'll probably stick with four-man crews though, as it's easier then to achieve more variety in poses, etc. The crew figures are pretty cool, being all kneeling, and in mid/late war garb. I did some minor bits of fiddling, in order to get the crews individualised a little 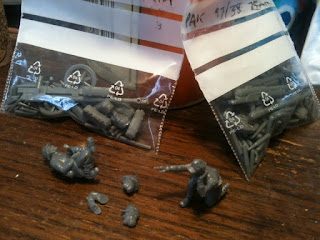 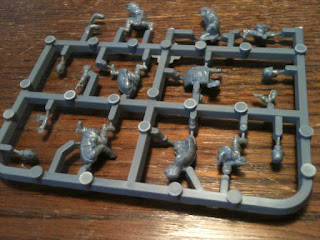 There are ten shells, and the same no. of spent shell-cases, plus two ammo boxes, per gun, in each of the two calibres. Add this to the eight spare crew figures, and the unused parts for the alternate gun types, and you have a healthy amount of stuff, either to use to add detail when basing, or to go in the spares box.

I think these are excellent little guns, with decent crews. The spare stuff is great as well. Mould quality and overall production design, esp. re. the guns and how they assemble, is also superb. The way some of the figures are designed to go together is a little limiting or awkward. But they're still good, and can be modified wth relative ease.

The lack of instructions in the box is the main reason this doesn't get the full five stars, along with the rather basic nature of them, and the slight fiddliness involved in constructing some of the figures. But all things considered, these are a great product, and reasonable value for money.