A Trinity Of Trilogies - Sometimes Good Things Come In Threes

An attractive edition of an essential Napoleonic work.

At the time of starting this post I'm currently retreating westwards across Europe with Eugéne, as Napoleon rebuilds his armies after the debacle of 1812, and prepares to take on his growing list of enemies, in volume three of David Chandler's superb Campaigns Of Napoleon. 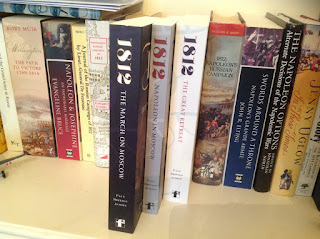 And with my recently acquired (Salute, 2016) tripartite version of Paul Britten Austin's monumental and superlatively wonderful 1812 narrative - which I've already read in a single volume edition (bought at another Salute some years back) - winking suggestively at me from the bookshelves, as pictured above, I find myself ruminating on the joys of the well-written trilogy. 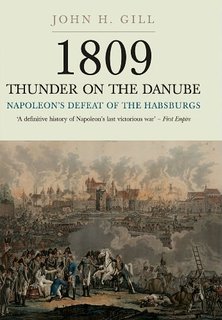 The third of my three-parters in this 'holy trinity' of trilogies is John Gill's series on the 1809 Austrian campaign. I've already reviewed two of these series elsewhere - excepting only Chandler's, which at this point I haven't quite finished. This post is simply a place to explore and share some thoughts on these excellent epics. 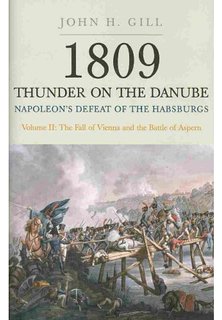 I couldn't face unearthing my own Gill volumes from the mountain of boxed up books at ours. Nor could I find the whole set in one pic on't web. So it had to be all three covers individually! 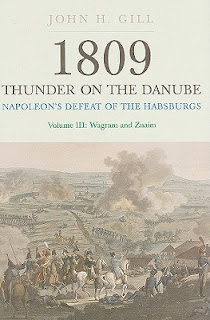 One of my first experiences with the joys of the triple-decker literary sandwich banquet was Tolkien's fabulous Lord Of The Rings. He hadn't wanted it to be a trilogy, but was persuaded to partition it by his publishers. I first read that monster masterpiece (as with the PBA work) in a single volume budget edition - as pictured below - albeit that it was still subdivided into the three 'books': The Fellowship Of The Ring, The Two Towers, and The Return Of The King. 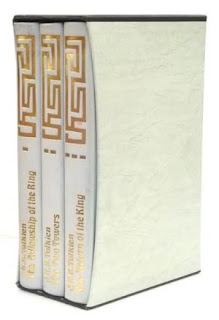 Although this isn't the best looking Folio Society edition of LOTR, it's the one I own, thanks to the generosity of my illustrator buddy, Tim Oliver. Cheers Tim!

And then, over the course of later years, I acquired various three-part editions of the LOTR, including a still as yet unread Folio Editions imprint, shown above. Coincidentally it's a gorgeous Folio Editions version of the Chandler trilogy I'm currently working my way through, as pictured at the top of this post. I think there's a strong argument to be made for investing in beautiful editions of favourite works, as it invests them (literally and metaphorically, I guess) with added value and appeal. 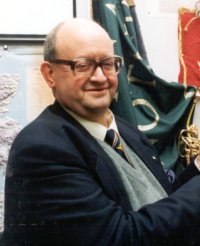 This post isn't about in-depth reviews or analyses of these works or their authors, but is simply a celebration of a particularly enjoyable literary form. I also have Everyman Library editions - thanks mum! - of Gibbons' mammoth Decline And Fall Of The Roman Empire, which, with a nod to such works as these, they decided to format as two sets, each of three volumes. A kind of double-decker trilogy!

There's a fabulous quote from Gibbons himself about his gigantic undertaking: 'Unprovided with original learning, unformed in the habits of thinking, unskilled in the arts of composition, I resolved to write a book.' I just love that! And I'm eternally grateful to all those who pick up their pens, literal or metaphorical, to tell us these epic stories.

Chandler and Gill both appear to fit the typical military buff profile, whereas Paul Britten Austin is intriguing to me because his other interests, in terms of published works, were pretty diverse (Swedish rococo poetry figures, I believe!). One thing they clearly all share, however - and who can blame them? - is an ardent interest in Napoleonic history.

Chandler was very prolific on both military topics generally, and Napoleonic era material in particular. I don't know much about Gill other than that he's written this trilogy, plus a companion volume, With Eagles To Glory, all focussing on the 1809 campaign against Austria. I was so blown away by PBA's 1812 trilogy, a masterful 'word film' [1] collage of authentic original accounts, that I desperately wanted to find more of the same by him. Alas, I've only been able to find one other Napoleonic book by him, entitled 1815, The Return of Napoleon, which relates the fascinating tale of Bonaparte's return to France from Elban exile, and the build up to Waterloo. 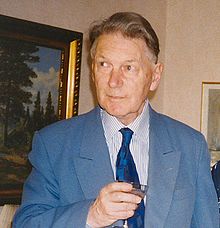 This last bit may seem like a very random digression, but, er... bear with me! Rather like the character Zelig, in the bizarre but excellent Woody Allen film of the same name, I often find myself imaginatively 'doing a Gibbons' when I watch a film, read a book, or listen to a song, inasmuch as, like Zelig becomes like the people he's around, I start to form imaginary plans of making my own book, film, song, or whatever. I'd love to think I have a trilogy of my own in me somewhere! 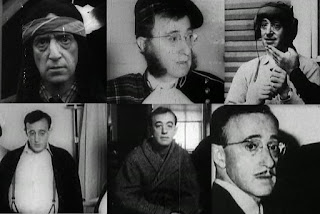 Some of the many faces of Leonard Zelig: as a 'red Indian', a Scot, boxer, fat man, Oriental, and, ummm...

To really appreciate the excellence of Woody Allen's 'human chameleon' idea, as presented in this movie, you need to see the film itself, in which he also temporarily turns black, and appears alongside everyone from Charlie Chaplin and Al Capone to Hitler and the Pope! Oh, and to get back us on track; of course Woody Allen also did a Napoleonic era film, the highly enjoyable and entertaining Love & Death. 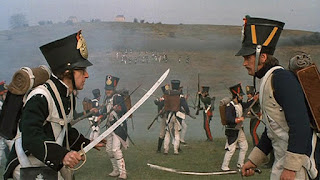 And finally, to really get back on topic: although when I started draughting this post I was retreating back towards France with Eugéne, by the time I actually posted it - the very day, in fact - I finally finished reading Chandler's superb tripartite epic. Having at last got around to reading this essential classic, I can now fully appreciate why the work merits both those adjectives. Merci beaucoup, Mr Chandler,  and Vive l'Empereur! I raise a glass of hearty French vin rouge to your memory, and thus do I salute you!

[1] The phrase 'word film' was Paul Britten Austin's own way of describing his textual synthesis of firsthand accounts. It's a good phrase, accurately conveying the vivid quality of the material.
Posted by Seb Palmer at 13:56