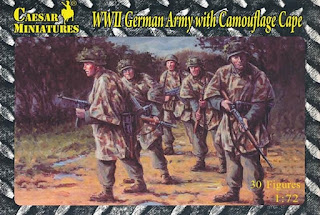 Some while back I bought several packs of Caesar 1/72 WWII Germans, and these guys were amongst them. Obeying my whimsical nature, I followed up the Britannia Miniatures SS cavalry with these fellows. Described on the box as 'with camouflage cape', these soldiers are in fact sporting the famous zeltbahn.

On the box artwork these guys have foliage on their helmets. But open the box, and their headgear is in fact plain and unadorned. Most of the figures are relatively flash-free, which is good. Sadly one or two particular poses - the guy kneeling with panzerfaust is worst - do suffer from rather more flash.  Fortunately there are no ejector pin sink holes or nodules.

I really rather like these chaps. The zeltbahn get-up is pretty cool, and affords ample opportunity for camo painting fun. The level of detail, the slim proportions, and assortment of poses and weapons is pretty good to. The only real downer is that soft-plastic figures' weapons tend to be afflicted with a case of martial brewer's droop! 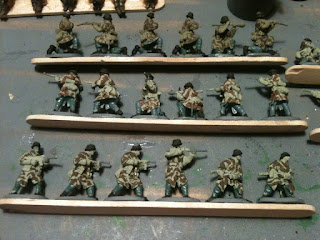 Choosing the right colours can be tricky. 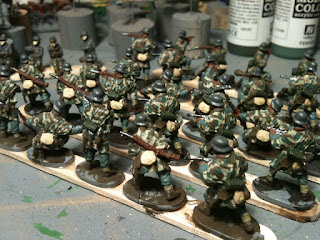 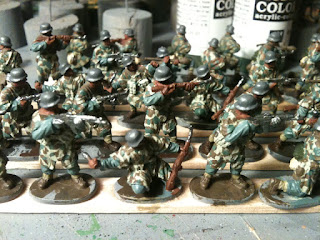 Viewed from the front... 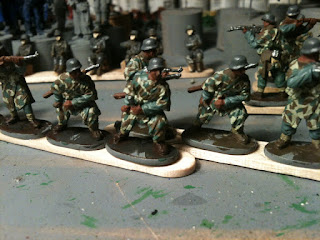 I experimented on the trio of figures shown above. The original pose, in respect of how he held his grenade, looked awkward and unnatural. The rightmost guy has had his hand and potato-masher grenade rotated 180°; the bloke in the middle now has his grenade in his left hand; the guy on the left now has no grenade. I reckon I'll give the leftmost guy an ammo box. I think I modified a couple of other figures from this set. But I seem to have misplaced them! 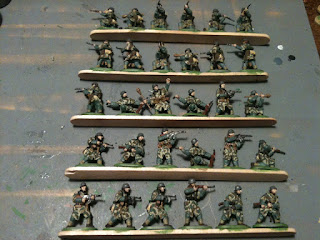 Nearing completion of the blocking-in phase. 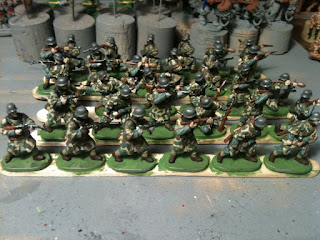 This is how they looked when I left off for today.

The next stage will be a couple of sprays with gloss varnish, and then some washes. And then I'll perhaps go in for some touching up, and a little highlighting and detailing. But ultimately, what with the volume of figures I have to paint, I'll be keeping these guys relatively simple.
Posted by Seb Palmer at 23:08