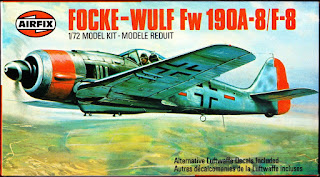 I recently acquired a batch of 1/72 WWII German aircraft from a chap at the Wisbech IPMS - thanks Sean! - including an ancient Airfix Focke Wulf 190 kit, as pictured above. The instructions look like they're on parchment, and have that ancient musty smell (a smell that, as an old book-sniffer, I rather like!). They look brittle enough that a strong breeze might see them crumbling to dust. The decals are petrified and useless. But the model itself appears ok, and all present and correct, albeit some parts have been removed from or have simply fallen off their sprues. 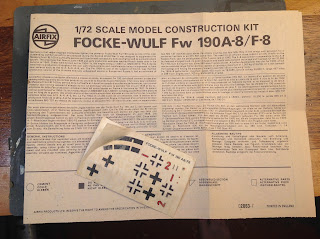 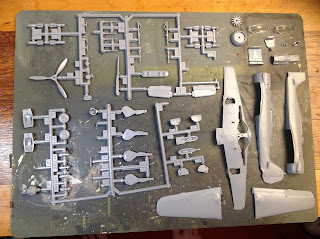 But at least all the bits are here. 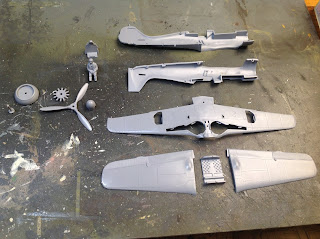 Starting to lay out and prep...

I have a few books that might make for potentially useful ref'. I always like to go to something for colour ideas, particularly as I never seem to remember which colours apply in any given situation. The internet's great for this. But I like having hard copy materials to hand. Especially at present, when all my Apple gear is blighted by recharging issues. The glossy A4 magazine style publications you can buy, as I have, on the High Street, such as Luftwaffe Fighters, by Claes Sundin, are my current go to resource for planes such as this. 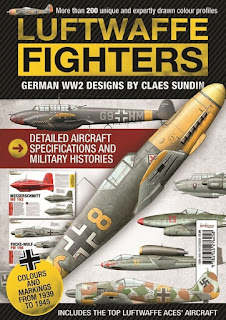 Onto the build: as usual I forgot to do certain steps. In this instance drilling some holes out in the wings for the appropriate choice of bombs or landing gear, or whatever it might be. And then I make my usual build booboos, such that the propeller on this kit probably won't wind up (boom-boom!) being able to turn. But in all honesty, I'm past caring. I just want to build the models without being too fussily perfectionist, and enjoy the process. 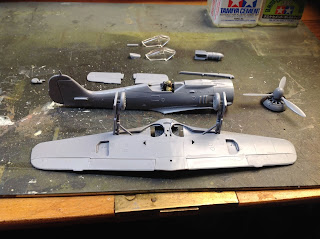 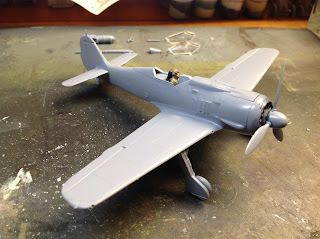 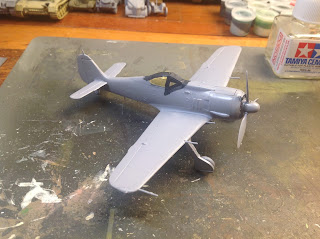 The state of the decals in this fossilised kit mean I'll be presented with an interesting challenge when's it comes to markings: have I got any/sufficient/appropriate decals anywhere in my stash? Or will I have to paint them with masks, and whatnot? Even if it goes the latter way, I'm not fussed. Indeed, I think it'll be fun. I doubt I'll bother with much cockpit detail in this instance. I have a number of Focke Wulf kits in my stockpile. I'm more interested in getting several built and painted than achieving specialist publication levels of finish. 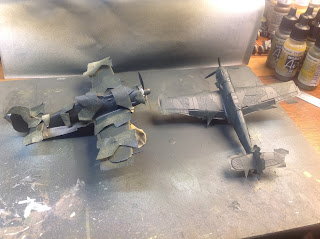 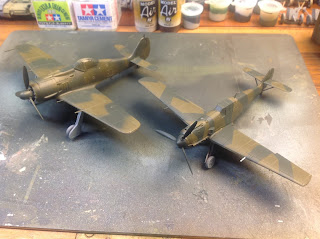 In the end the prop' on the Focke does turn. The one on the Airfix Me 109 beside it, above, doesn't! You can't have it all, I suppose. But, of more interest to me, I tried a slightly new (to me) painting technique, with raised masks, to create feathered edge camo'. I'm pleased with the results.

After a hiatus of several days, during which I worked on the Revell WWI Fokker Eindecker featured in another recent post, and various house and home type jobs, I got back to this plane, and an old/new (older build, for me, of a newer kit!) Me109. 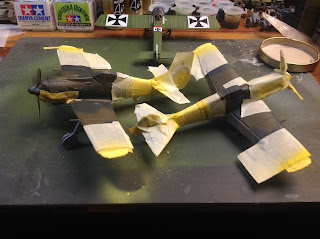 The first of the next few steps, prior to a glass coat and then decals, is to mask off and paint the various yellow areas, such as wing tips, rumpfband, etc. Once again the Claes Sundin colour profiles were my general inspiration. But rather than, as some do, trying for a specific pilot's plane, I'm going with a more generic freestyle pick'n'mix approach.

In the end these yellow areas were under-coated white with brushwork, then airbrushed yellow (two coats of a custom non Model Air mix), and then given a final brush coat. I'd have preferred to just airbrush the lot. But I find my airbrush clogs too much when I use my own non Model Air mixes. As I often say, I remain a long, long way from attaining the coveted level of airbrush ninja! 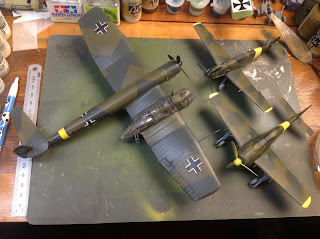 I believe I painted the Bv141 pictured above with freestyle choices of colour, in terms of the two shades of camo' green. But I didn't write down exactly what colours I used (damn fool that I am!). The more recent Me109 and Fw190 were painted with Vallejo Model Air colours specific to the appropriate German RAL numbers. I have a post somewhere here on the blog about German WWII colours. I intend to improve and expand upon that at some point soon, and include more Luftwaffe colour info'.

And one other very noteworthy thing: during handling I continually broke off everything from delicate extremities - aerials, machine-guns - to larger parts, like flaps, and even tail wings! My pal Paul has a method of working that I can see is useful for preventing or minimising such risks, where he leaves the prop' off and has the whole airframe attached to a stick. Think I might have to adopt a similar strategy!

Anyways, that's it for now. I've got a busy day today, with a large number of my drum pupils at one of my schools performing in an assembly, and a vintage fishing rod to be collected, after which I'll be checking in on the above mentioned Paul. Still loads more to do. But decals and further painting will have to wait for now. 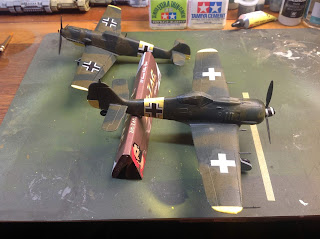 Another day, and the painting is mostly complete, albeit very basic. Painting the spirals on the nose cone/spinner things was a right old tester. I tried numerous approaches. In the end combining spiral masks with freehand-painting. Phew! I then gloss-coated the two planes, ready for decals.

The balkenkreuz on the sides of the Focke's fuselage are leftover transfers from the Airfix Bv141. On the upper and lower faces of the wings I've used Swiss air force white crosses, as supplied in an Airfix Me109 kit. I'll mask and paint the black parts in later.

Getting the decals positioned correctly - or rather to my own satisfaction - was very tricky, and took ages. I used Humbrol Decal Solution to set them in place, and a Vallejo decal medium to make them confirm to the surface features. There are still a good deal of decals and markings to be added. But that'll have to wait!
Posted by Seb Palmer at 09:06