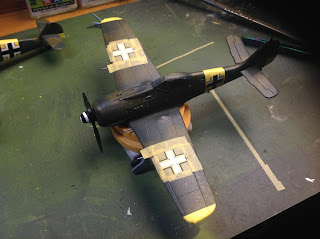 I masked off the Swiss Air Force markings on the Fw 190, to turn them into balkenkreuz. Being somewhat constrained by their size, these are going to be rather non-regulation. I did try and find some spare decals, but only turned up the two I used on the fuselage sides of the Focke. 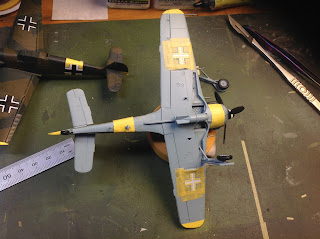 It was very labour intensive, prepping these. But I did enjoy doing it. I applied the paint with a flat head brush. As I feared, where the masking overlapped, there was some bleed. So I had to go in and touch up the messy bits. 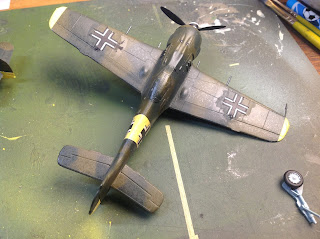 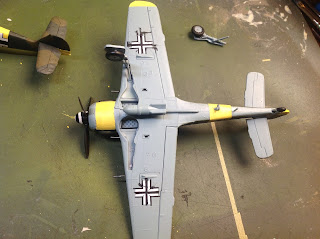 Bleed most easily discernible on underside.

And below, the end results. I did think that I could've tried to emulate the decals on the Me 109. But in the end I just went with what I had. And I'm happy enough. The temptation to remove the canopy masking is very strong. But I ought to do the rest of the decals first, and perhaps a bit of weathering? 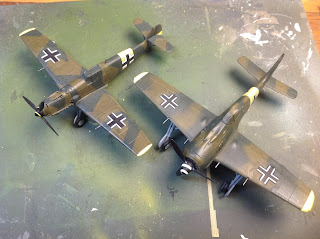 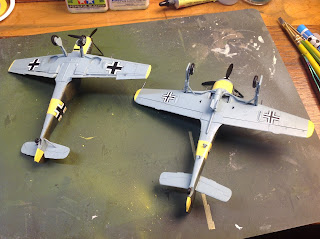 
As usual, whilst working on the balkenkreuz I knocked a wheel assembly off. That's the umpteenth time in this build (and it's typical of the delicate extremeties in any model build, but seemingly more so with planes) that I've found myself gluing a delicate assembly back in place. It puts me in half a mind to leave these parts off until painting is done. Hmmm!?
Posted by Seb Palmer at 22:42