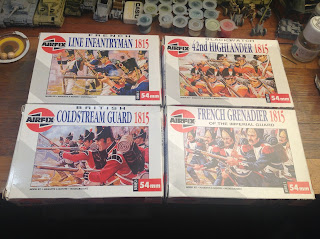 At last mondays Wisbech IPMS my pal Sean very kindly gave me four old Airfix 54mm Napoleonic figures. I made a start on the Line Infantryman today. I have a yen to do this figure as a soldier from one of the Swiss regiments in French service. I'm even thinking of perhaps doing him as a drummer. But I'm not sure that that might not be a bit too much for me right now? 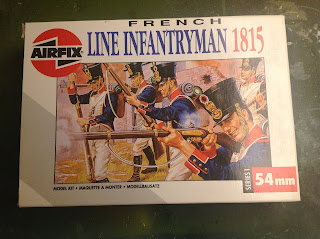 The box art kind of suggests many figures! 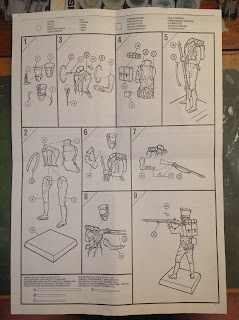 The instructions, showing the two pose options the kit offers. 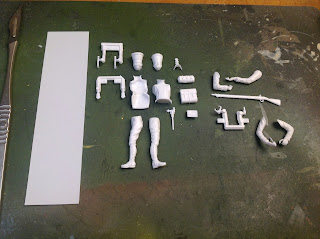 Laying out the parts, for prepping/cleaning up. 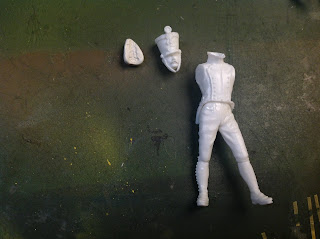 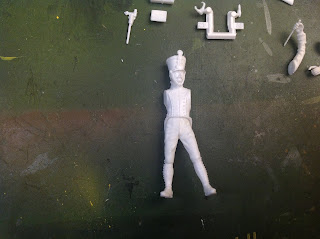 Major body assembly completed. Not sure what to do with his arms?

I've been tidying the figure up a little; removing mould lines, filling in a dimple in the left crotch - some sort of casting defect? - with Milliput. I even added a Milliput moustache. Just like lots of other stuff, superglue, decals, etc, I found the Milliput would adhere to anything and everything except what I wanted, in this case the figures' upper lip!

Going to leave him now, and let the Milliput set. Tomorrow I'll start doing the plastic card straps and equipment. What fun! 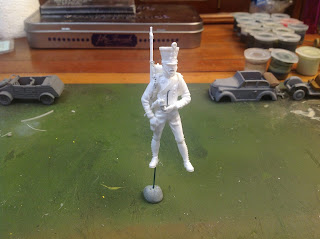 Fully assembled, gun slung over shoulder, and holding a pipe.


As ever, things got pretty tough at various points. Scratch-building a more detailed musket strap was in order. But it turned out to be very tricky. In the end I opted to have his musket sling over his right shoulder, and a scratch-built pipe in his left hand. I guess this makes him a southpaw!? I reckon I'll start painting him today.

Having built the figure, and in a converted pose of my own design, I decided to crack on with painting. After a Halfords matt gray undercoat, I could see a few bits needed filling or sanding. Then it was on to blocking in the colours. And after that came the slow and painstaking work of detailing, and even a bit of shading. 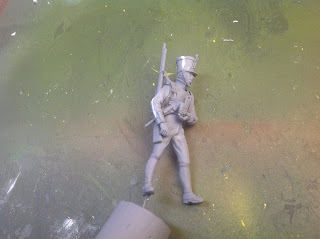 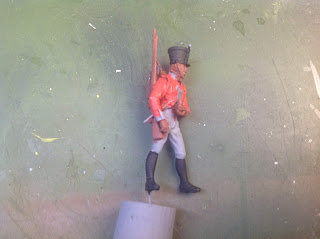 
I got so engrossed in the painting I forgot to take any pictures of the various stages. Below are a number of photos showing him as he looks now, at close of play today. I've painted him up as a soldier of the 4th Swiss regiment. I used several reference sources, but chiefly this Carle Vernet. 1812 image, below. 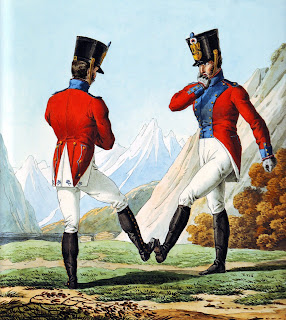 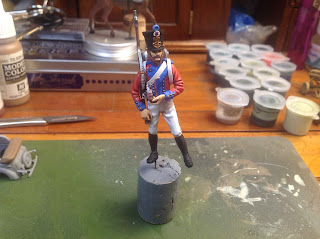 I have to confess I'm actually quite pleased with how he's turned out. 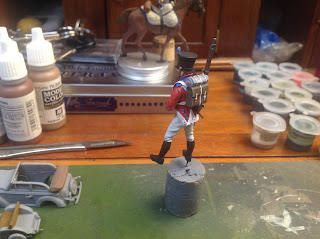 I'm leaving the painting quite basic, not going mad with shading, etc. 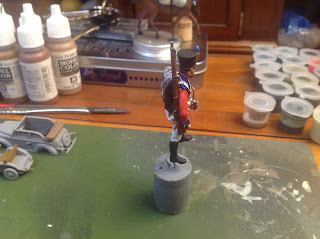 I like this angle, 'cause you can see the shape of his pipe. 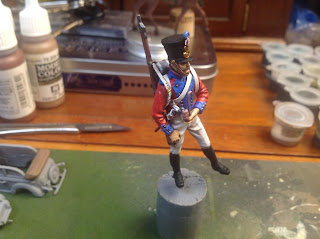 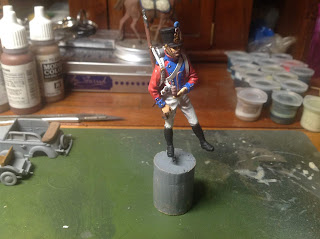 A change of lighting to add shade/contrast. 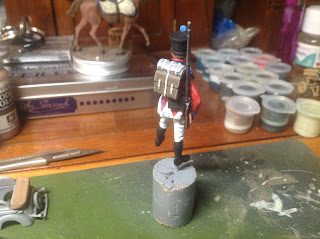 
I'm going to let him dry overnight, then apply a couple of coats of varnish (matt). And then it's a question of deciding how to base him. But that's another challenge for another day. 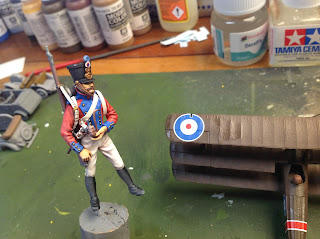 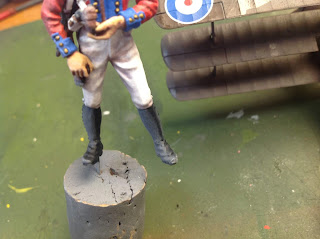 Bugger! Just sprayed matt varnish on my Airfix 54mm Infantryman, and gloss varnish on a Revell Sopwith triplane. Both have gone 'cloudy'. Its ludicrously hot and humid right now. Plus I didn't shake the cans enough. And it's also very humid. So a 'perfect storm' of causes concatenate and all my hard work painting is jiggered. I've read online and watched some YouTube vids, mostly suggesting either a gloss coat and then another matt coat (if required), or... olive oil! Anyway, I think I'll try gloss coat first, applied with a brush this time... fingers crossed! 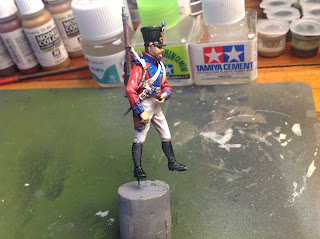 Gloss overpainting didn't do the job.


Hmm? Sadly the extra coat of gloss varnish didn't do the trick. The picture above was taken after a hand painted application of gloss varnish to the most affected areas. The shako and shoes/gaiters still look awful. So I'll be overpainting them in black, to remedy this. Hopefully this experience will teach me to be more patient when applying varnish?
Posted by Seb Palmer at 22:51