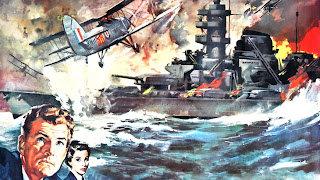 Despite numerous factual accuracies this is very good and highly enjoyable film.

One of the major departures from reality is the insertion of the entirely fictitious central character, Shephard, played by Kenneth More. But you can see why they've done it: he brings certain human aspects, through the subplots concerning his son (on the Ark Royal) and his pretty Wren assistant, to what otherwise might've been a purely technical exposition. The start of film is very heavily loaded with contextual explanations as it is. 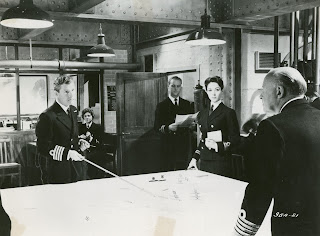 Kenneth More as the fictitious Shephard, in the wonderful underground Admiralty War Rooms.

The Shephard character anchors part of the drama in the subterranean labyrinths of Admiralty command, where action unfolds at the strategic level, and this runs parallel to action at sea aboard Bismarck and various Royal Navy vessels. The broad arc of the history is present and correct, from picking up Bismarck's departure from the Baltic, in company with Prinz Eugen, via the sinking of Hood and the fateful Swordfish torpedo attack, to her final attempts to reach Western France.

But there are a number of changes to events, or use of dramatic license, such as the depiction of Lutjens as a slightly crazed Nazi, or the final battle taking place in calm seas. Indeed, whilst the vast bulk of the film is about hunting Bismarck down, the final cornering and destruction part feels a bit rushed, or compressed.

The ship models are superb, and deployed to great effect. 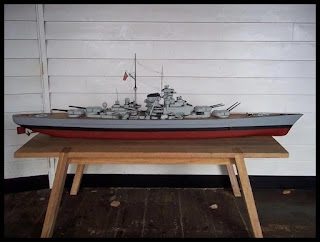 One of the best things about this film, and especially so considering it's vintage, is the use of excellent model ships to show the naval action. I recently watched Battle Of The River Plate. And that was kind of spoiled by the use of a modern American ship to represent Graf Spee. That's also a good film - Powell and Pressberger don't make bad movies - but the substitution (which stretches to the gun crews on 'Graf Spee' being attired in contemporary US naval gear) really grates. I found a great article online about the models used in the film (read it here), which says they were the work of the Lydecker brothers, and possibly also a fellow named Bill Warrington. 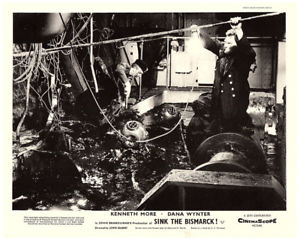 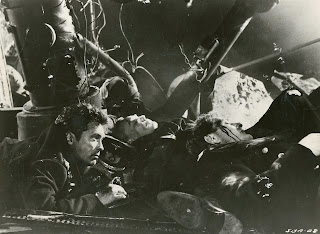 Another good thing is the sense of the brutality and tragedy of loss in war for both sides. Less welcome is how the fictitious subplot revolving around Shepherd's son slightly overshadows the actual factual loss of HMS Hood (again, as with the demise of Bismarck, this occurs rather too abruptly in the film). But to the filmmakers credits they do depict some of the awful conditions aboard Bismarck in her death throes.

I thought I had this movie, and have been meaning to watch it for a while now, as I'm currently reading the book Battleship Bismarck, an truly exhaustive and exhausting account of this iconic vessel. But it turned out I didn't have the film after all. Having found it on a DVD two-fer, alongside The Enemy Below, I bought it from a seller on Amazon. Finally getting to watch it was great fun. Next up? Build the Revell 1/700 Bismarck model! 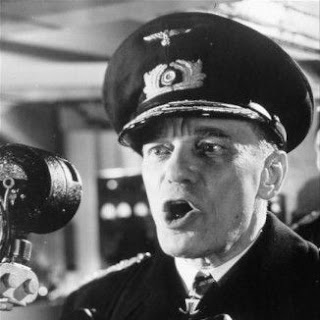 Lutjens, as portrayed by Karel Stepanek. 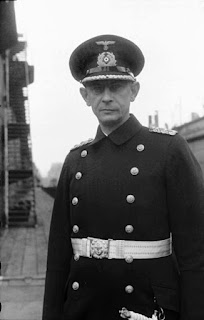 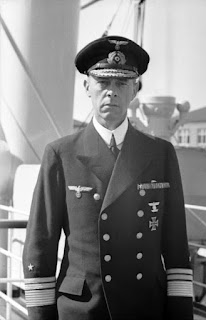 One of the less agreeable departures from facts concerns the portrayal of Admiral a Lutjens, as a sentiment-crazed Nazi: 'In reality, Lütjens did not agree with Nazi policies; along with two other navy commanders, he had publicly protested against the brutality of anti-Semitic crimes during Kristallnacht. He was one of the few officers who refused to give the Nazi salute when Hitler visited Bismarck before its first and final mission, deliberately using instead the traditional naval salute.' [1]


[1]  Quoted in Wikipedia's entry on Lutjens, from a book by Robert Ballard. Ballard was the man who discovered the wrecks of both Titanic and Bismarck.


Ballard's expedition to find the Bismarck was filmed (by James Cameron) for National Geographic. If you search online you can find this film, and it's ver well worth watching. 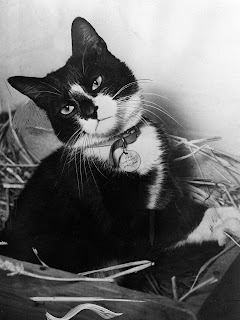 
A rather sweet but possibly fictitious footnote to this otherwise quite macabre tale, with so much loss of life, concerns a ship's cat, allegedly rescued after the ship went down. Nicknamed Oskar, or Unsinkable Sam, but often illustrated with a photo of Simon (pictured above), resident cat on HMS Amethyst, it's not clear if there really was a cat rescued from Bismarck. Ludovic Kennedy makes no mention of it, I've heard, in his authoritative account of these events. It'd be a nice little furry coda to an otherwise grim but highly dramatic tale.
Posted by Seb Palmer at 10:07