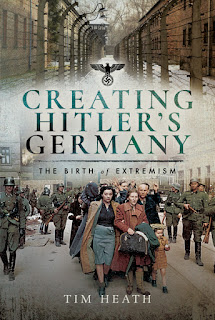 This is a very exciting and readable collage of firsthand accounts, telling the story of ordinary folks, mostly German, and their experiences as part of the evolving story of how Nazism came to take over German society.

Rather unusually for a book of this sort there's no massive lists of official records and bibliography, etc, as the author says all his material was gathered personally, through interviews, letters, email correspondence, and so on. This means we have to take his word on the authenticity of his materials. For now I'm willing to do so. But this does compromise this book somewhat, as the field of Third Reich studies is known for controversy, including the faking of 'evidence'.

But for now I'm giving it the benefit of the doubt. If the materials quoted herein are all genuine, and they all seem plausible enough, the resulting stories are very stirring indeed. They range from folk who were enthusiastic racist Nazis, to those who got caught in the middle, right through to those who were able to escape Germany and observe her self-destruction from elsewhere.

Many would agree that the roots of WWII are embedded in WWI, and that the Allied handling of postwar Germany helped contribute to the unstable situation that gave the Nazis a foothold on the ladder to power. This book follows that line and works through from pre-WWI, WWI itself and the subsequent fallout, through the 'happy days' - at least if you were part of the 'in group' - when many inside and outside thought Hitler's was just what Germany needed, on into and through the maelstrom of WWII.

If it's all genuine, and I hope it is, this is a fascinating and very good piece of social history, showing the many nuanced facets of a dark and disturbing time in the world and particularly German history.
Posted by Seb Palmer at 09:37