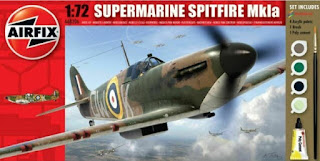 I built this kit, painted the pilot/cockpit, masked the canopy and undercoated it all in Halfords grey primer, some ages ago. In fact, if recall aright, I purchased the kit whilst holidaying in Suffolk many moons past. So it's been a long while gathering dust in the meantime. But as I've dusted off and completed the Me109 I started around the same time, I figured I ought to try and finish this an' all. 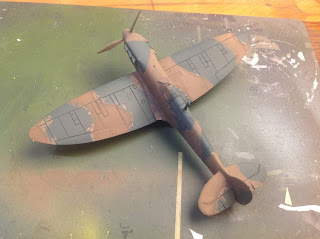 
Rather annoyingly I forgot to take any pics of the various masking stages on the airbrushing shift. The underbelly colour - a beautiful pale eggshell blue - went on pretty nicely. And this was using the cheapo acrylics Airfix supply in some of their 'glue, brush 'n' paints included' kits in my airbrush (with a couple of drops of water added).

I opted to do the green next, and the brown as the final colour. Again, I used the supplied paints. One reason for this is that all my Vallejo colours are either general purpose, Napoleonic, or WWII German oriented. So I didn't have any of the right shades for RAF WWII, other than the little pots supplied with the aforementioned all in one Airfix kits. 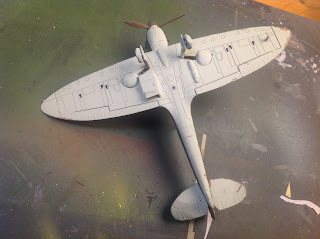 And underneath as well, though less awful.


The Brian and green colours look lovely, and very RAF, and the green even behaved itself well. Only the brown gave me any issues. And I think I must've over-diluted it, as it ran or bled quite badly under the masks. Mind you, I was largely masking using some cheap low-tack decorators masking tape, which has the nasty habit of occasionally coming away from the model surface. 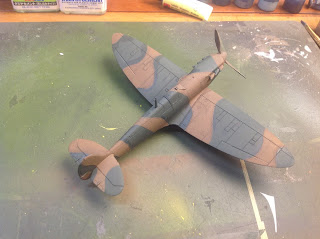 Tidied up with patient brushwork. 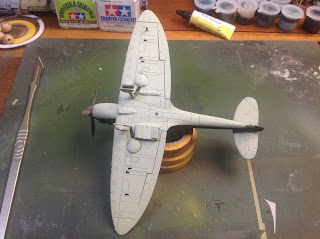 Anyway, using leftovers from the little pots of acrylic, I was able to tidy up the paint job with some patient brushwork. I've discovered that I like a flat-head brush for this task. Next I need to get in and paint some little bits 'n' bats, like tires, nose cone, props, etc. Oh, and those little red bits where the guns are, in the wings. And then it'll be gloss-coat and decal time, a step I always enjoy as it brings a certain finish to the look of the model. 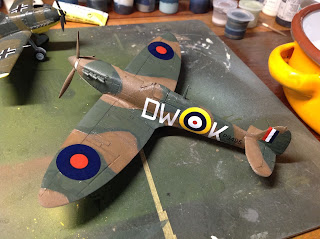 The side fuselage markings seem rather oversized!?

I tried airbrushing a gloss coat on. Didn't go well. Humbrol clear gloss bunged up the airbrush something awful, necessitating a comprehensive strip down and clean. I seem to do end as much time doing that as airbrushing. Probably more, in fact. And, ass ever, applying decals was a bit of a bugger. They seem, rather like superglue, to adhere to everything other - fingertips, for example - than the model surface. Even with Decal Fix applied.

I've lost the box and instructions for this kit, so I had to use ref for the placing of the decals/markings. The side fuselage markings seemed rather oversized. And the roundels? Well, I'd have liked some fir under the wings as well as the top surface. The tail fin tricolour will need trimming off a bit with a scalpel.a d there are tons of tiny decals for sundry technical markings, still to be applied. But, as ever, decals do add a nice degree of finesse. 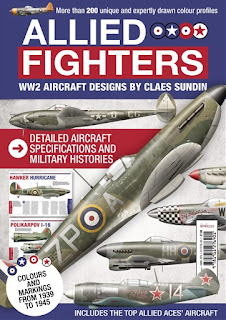 This was handy reference... 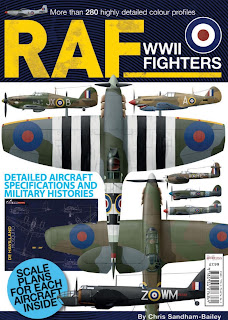 Both of the above A4 glossy mag format publications were useful for colour and markings reference. That said, there's still a fair degree lacking, in terms of explanations of different colour schemes, and things like landing-gear, propeller blades, etc. And neither book seems to include all of the myriad  sundry body markings that are supplied in the Airfix kit in Decal form. So I guess I'll have to try and scour the interweb for an online example of the instructions. 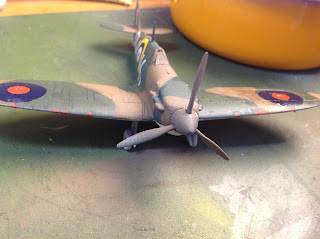 I used the supplied decals for the little red squares over the gun ports.