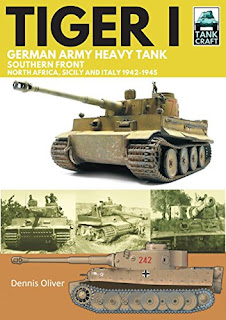 It's interesting that whereas there's currently just the one book in the current Tank Craft series on the T-34 or Sherman, covering these vehicles over the entire war, some German armour is getting much more detailed treatment, as exemplified by the title under review in this post.

Dennis Oliver seems to have his own slightly different m.o. when it comes to his contributions to this very useful series from Pen & Sword. Most of the Tank Craft titles I've read by other authors follow a fairly standard format, whereas Oliver instead uses a series of his own devices, such as timelines, unit histories, and organisational schematics, etc. 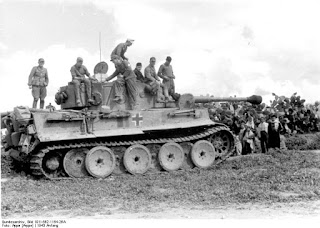 A Tiger I in Tunisia.

If you are, as I am, a Panzer nut, then this is both a blessing and a curse: it's a blessing because more detail is great. It's a curse because it entails greater expenditure. There's also the matter of what kind of info you're after, and which approaches most chime with ones own tastes. Oliver's idiosyncratic approach is fine with me. Indeed, by and large I really like it. This said, the degree or depth of detail is pretty hardcore. And, whilst they're useful references, the timelines he frequently employs are, for me, quite hard going.

Certain key parts - the colour profiles, under the heading Camouflage & Markings - and the Model Showcase and Modelling Products segments are pretty much as per all the Tank Craft titles. Most of the models showcased in these titles, are 1/35, with just the occasional 1/48, 1/16 or - my preferred scale - 1/72. On this occasion, whilst the Products section mentions numerous 1/72 and 1/76 kits from several manufacturers, none are featured in the Showcase chapter. 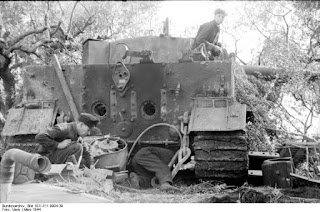 A Tiger crew engaged in repairs in the field, Italy.

Of the theatres covered here, which are North Africa, Sicily and Italy, it's the last two that interest me most, and Italy in particular. The terrain which was being fought over, and the camouflage and markings of the materiel are all, for my money, more interesting than the dusty/sandy monochromes of the North African desert war.

All in all another solid chunk of highly useful/enjoyable stuff for us Panzer freaks. Love it!
Posted by Seb Palmer at 00:33