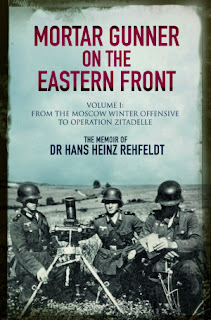 Volume one of a two-part Ostfront memoir, subtitled From the Moscow Winter Offensive to Operation Zitadelle. Hans Rehfeldt is just 18 when he sets off on a nine day train odyssey to the Eastern Front. Personally I love firsthand accounts such as these. Even the trip to the Front is interesting in itself.

The author gives almost continual daily entries - and that's exactly how the narrative is presented - that track the progress he and his comrades, of the elite Grossdeutschland unit, make. There's a lot of detailed frontline action. I was hoping to say it probably helped his chances of survival that he was in a mortar unit, as you might imagine that they would be slightly behind the sharp end, but I've been somewhat disabused of this notion, inasmuch as mortar positions were as often as not on or forward of the front line. Not during attacks, necessarily, but very much so during the longer periods between attacks. 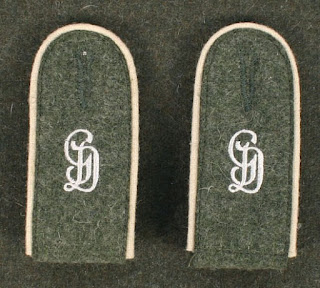 Mortar ammunition runners, and such was Rehfeldt's lot, also had the risky job of to-ing and fro-ing between the mortar pits and rearward supply areas, fetching fresh ammo. Indeed, it was running this dangerous gauntlet during an attack that would earn the author an Iron Cross, second class. This book (and doubtless its companion second volume) are terrific for learning about grunt-level tactical warfare on the Ostfront.

One striking thing is that it's very early on in the book, and Barbarossa itself, that the German's reach their farthest east, with the author and his fellows southeast of Moscow, around Tula, at which point the tide turns and retreat begins. Temperatures reach -52°, and Rehfeldt is invalided out of the line twice, due to severe frostbite which, along with near ubiquitous diarrhoea and vermin, reminds one of the horrors of Napoleon's 1812 invasion of Russia. 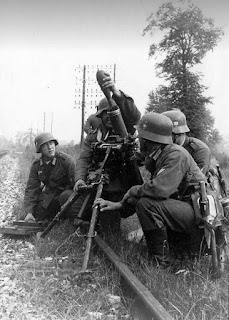 The written content is well supported by plentiful photographs, and not just generic images, but photos of Rehfeldt and his fellow Grossdeutschland soldiers. Also, in addition to his diary and these photographs, there's a further interesting graphic element, in the form of a good number of Rehfeldt's sketch-maps. I think it's great that these are reproduced as drawn, as opposed to having been redrawn professionally. Their very naïveté adds to their authenticity and interest.

Grossdeutschland, with its famous stahlhelm unit insignia, was way more than decimated. Losses were nigh on - indeed it's suggested here they exceeded - 100%! In other words more men were killed, injured or otherwise lost (captured, missing, etc.) than made up the full-strength of the unit pre-combat. As a result they are amalgamated into other units during the campaign, before being withdrawn for rest and refitting, and restored at greater strength, ready for Operation Zitadelle, the Kursk offensive.

A 2.8cm Panzerbüchse like this one knocks out at T-34 outside Schachty. [1]

I'm posting this review as I near the end of volume one. It's been brilliant, and continues to be exciting, informative and highly compelling. I'm really looking forward to the second instalment! To conclude, I'll do something I don't usually do in my reviews, and quote an extended extract, to give a flavour of Rehfeldt's writing [2].


'We heard by radio that Stukas had been called up. Now we searched the skies waiting for them to appear. Meanwhile our armoured cars had rounded up about twenty-five Ivans from the fields of wheat and sunflowers. The [Russian] cavalry troop was on the point of making an attack when the Stukas arrived, twelve of them. At this the cavalry, some mounted, others on foot, turned tail and ran for cover. The Russian fear of the Stuka appeared to be enormous. Our prisoners standing near us threw themselves down and looked up fearfully at the aircraft. We have noted this behaviour amongst the Russians so often that we consider that the Stuka dominates the battlefield. First they circle the target like vultures, then one machine after another tilts over one wing in steep downward flight at fantastic speed. The bombs are released almost directly onto the target. The howl of the 'Jericho sirens' is an additional psychological factor. The walls break and the howl gets on your nerves. It all makes Ivan deadly quiet, but for us brings – relief! The circles become tighter, the target has been identified and the nose tilts – towards us! Crippling horror! They are diving on us! Smoke signals, quick, quick! The flares hiss upwards and orange–yellow smoke is born on the wind. Our position is marked and the tank destroyer shows the swastika flag. At the last moment, already in the dive, the Stukas realise their mistake and, with a bloodcurdling wail of sirens close overhead, turn and climb in a steep curve upwards... They circled again and this time bombed the Russians; total chaos ensued, the bombs exploding in the midst of wildly zig-zagging tractors, tanks and fleeing soldiers. An ammunition truck exploded – some tanks zig-zagged off the road, bombs dropping between them: Ivan made no reply. In conclusion the Stukas strafed any vehicle in the open, and soldiers fleeing in panic. We watched the scene wordless and spellbound. Whenever a Stuka bomb exploded, we felt the shockwave a kilometre away. Thick clouds from the explosions hovered over the battlefield. Finally the Stukas made a pass over us at low-level waggling their wings, a sign of greeting and victory, and then they roared off without climbing.'

[1] This is one of several weapons I'd not been aware of before reading this account. N.B. the pic is not from this book.

[2] I think it's worth noting that the translation is excellent. One hears the Germanic turn of phrase, the rhythm, sentence construction, etc. But English vernacular is also well deployed, where appropriate, using such phrases as 'hell for leather' and 'hit the sack'. 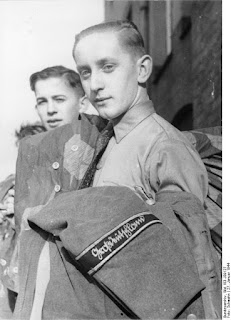 A good view of the cuff-band.

The above Bundesarchiv photo, not from the book, shows the Grossdeutschland armband quite clearly. I'd expected it to look more like the top of the two examples below. But it's more like the bottom one, i.e. harder to decipher! Can anyone decipher and explain exactly what the GD cuff thing says, and why it differs from what one  might expect? 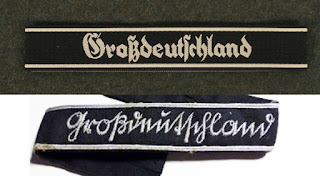