Book Review: From Arromanches to the Elbe, Charles More 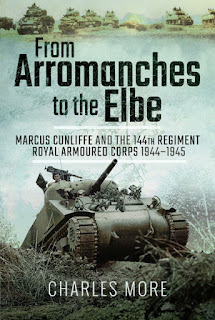 This fascinating book follows the 144th Regt, RAC (Royal Armoured Corps) from landing, on D-Day +8, through the Normandy campaign, into Belgium/Holland, and ultimately across the Rhine. It does so in part through the memoirs of several who served in the regiment, leaning particularly heavily on the writings of Marcus Cunliffe. [1] 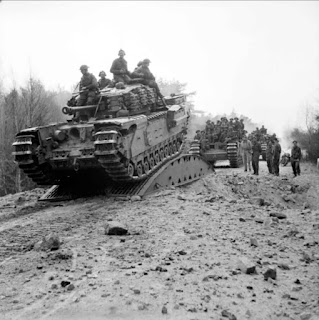 Initially equipped with Churchills, which were replaced with Shermans, the unit would eventually be reborn as the 4th RTR (Royal Tank Regiment), and was then furnished with Buffalo LVTs, in which capacity it had the honour of being the first British unit across the Rhine, ferrying troops over. [2]

One of many things I really enjoyed about this book was the way it covered both very well known actions - so for example we hear about how the regiment was embroiled in the famous Ardennes/Bulge actions - and also those frequently glossed over, such as their first real action, at Noyers, or when they helped in the reduction and capture of le Havre.

The photographic segment isn't the most exciting of it's type, but it does illustrate some of the people and places depicted. The several simple maps are better than average. And there's also a glossary, which is always a good thing. The book itself is well written, albeit in a rather plain way. At first I was worried it'd be one of those dry recitations of unit numbers and movements, and might be too obscure/specialised to keep me interested. But it proved otherwise, thanks in no small part to the extracts from the writings of Cunliffe and others, like Alan Jolly and Hilary Phillips. 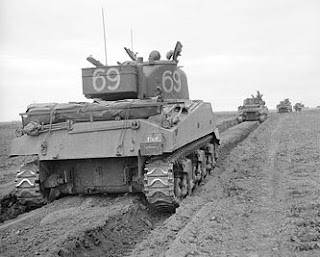 In the end, once I'd gotten really stuck in, More's account turns out to be a model of clarity and balance. Rather interestingly he addresses several well-worn clichés concerning the allegedly poor training, morale, equipment and performance of British troops and Allied materiel, giving a much more positive view than one is sometimes accustomed to hearing.

A number of familiar themes emerge, during combat or 'action' (not always the same, as when a recce in force advances unopposed), such as how tank numbers rapidly dwindle due to bogging down or mechanical failure. And the confusion or muddle, as when a barrage causes advancing troops to lose their way in the dust that's raised, or two units are given the same task. But such things are commonplaces of war, and More shows that these weren't necessarily purely Britush failings.

One clear thing that emerges is the imbalance of materiel. At one point the Shermans of the regt. - sixty or so - are temporarily mothballed, while the unit is issued with the Buffalo LVT. Whatever failings the Sherman may have had, often overstated anyway, they were available in numbers that meant, no matter how good the Panthers or Tigers opposing them were, there simply weren't enough of them. 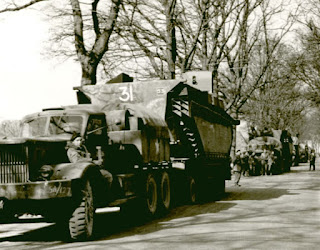 'Buffalo' LVTs of the 4th RTR are readied for crossing the Rhine.

Structurally the first six chapters, after an initial introduction, follow the unit as it campaigns across Western Europe in 1944-45, the following chapter headings give a good overview: Arromanches to Noyers; Operation Totalize; Advance to the Seine; Holland and the Ardennes; The Rhine to the Elbe. For those of us who like potential wargaming scenarios, there are numerous terrifically exciting vignettes, such as first blood at Noyers, or the delivery of troops over the Rhine to take Sees.

The final chapters, The Experience of War and Regimental Ins and Outs are also very good, adding some very welcome supplementary dimensions to the book. Indeed, some of the most poignant personal revollections, as when the tanks force passage through a distraught elderly French woman's home, when crossing the Calonne at La Vallette, are tnot be found here.

[1] Cunliffe was a successful academic and writer. An interesting footnote is that his first wife, Mitzi Solomon, was an American Modernist sculptor, whose chief claim to fame may well be that she designed the BAFTA Awards mask. 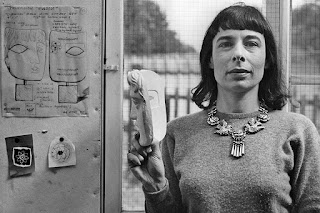 [2] Much to Monty's chagrin, the Americans were already across at Remagen.