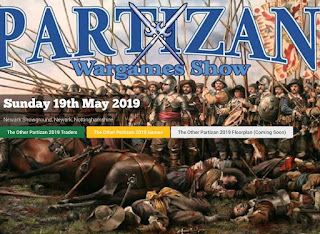 I went to this year's Partizan with my pal Paul. As usual books are a primary draw. This year I knew I didn't really want to buy any model kits, as I've already accumulated so many. Nor any (or perhaps many is better?) wargames figures, as I have my fairly vast Napoleonic armies already. They just need painting and basing. Just!? Such a small word, such a large task...

I did think about buying scenery and basing stuff. But I still don't know how I'll be going about all that. So nothing doing there either. Most of the traders are in larger scales than those I'm currently into, and there weren't as many selling WWII 20mm stuff as there sometimes are. But it was in this latter category that I did wind up making a few small purchases.

One thing I ought to note is that I didn't take any means of photographing anything, so I can't, as I normally would, illustrate this with the eye-candy of the better looking games (compare this with my previous visit/report, to Partizan, 2017). As ever, it was fun to wander around marvelling at all the creativity and work people have put into some pretty stunning tables. That said, I wasn't quite as blown away as I have been on some other occasions. Indeed, I'd say - and no offence intended - that this year most of the games were simply at the better end of 'run of the mill'. 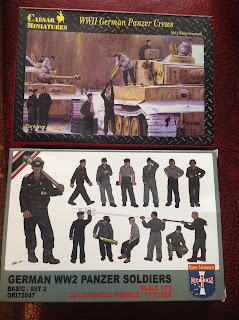 I'm a bit old fashioned as well, when it comes to what interests me most, which is WWII (quite well represented, mostly in larger scales), and Napoleonics (less well represented than I'd like). My favourite Napoleonics game, in terms of beautiful figures and well realised scenery, depicted action in my least favourite of Napoleonic theatres, in what appeared to be North Africa, so probably Egypt (I didn't check what the battle was; could've been the 'Holy Land'!?).

Perhaps one of the best looking games was a WWI trench warfare jobbie. That looked amazing. There was a pretty steaming verdant tropical game as well. I'm less keen on the myriad obscurer eras, and even less so the fantasy or sci-fi stuff, including steampunk, which seems to merge those two previously separate genres. I can admire the creativity and imagination involved, but it just doesn't connect to the 'real history' buzz that is possibly the chief dynamo of my interest in all things mini-military. 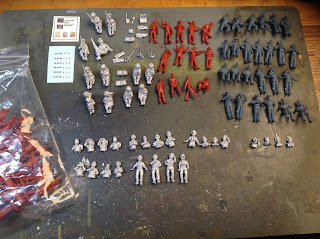 In the end I did buy a few 20mm figures, pictured above, as I need crews for various vehicles. The Caesar German Panzer crews I bought (dark grey) are wearing winter gear, but many of them might well pass in other theatres/climates, once painted. They're made from a nice harder plastic, very much like that used for a set of Preiser figures I acquired some while ago. The Orions (in an unusual brick red!) - which I first saw as expensive resin products - are made from that horrible soft bendy plastic that so many 1/72 figures are available as. Hard to clean up, and tricky to paint.

What I love about the Caesar and Orion figures is the realism of pose and uniform rendering. Many of the standard 'for kids' style plastic toy soldiers I grew up wth, from makers like Airfix and Revell, etc, favoured 'action' poses that are both unrealistic in themselves, and then doubly so in how they are constrained by the moulding processes. These more recent makers seem to take the trouble to create figures in naturalistic poses such as you see in wartime photographs, making them infinitely better and more usable. 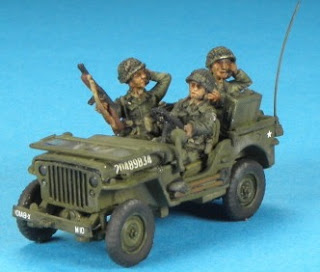 Some of Adler's 20mm Jeep crew, from Adler's own publicity images.

Also very well posed and sculpted, I bought my first Adler 20mm WWII figures; German tankers and US Jeep drivers/passengers. I'm looking forward to painting all of these figures and populating some of my vehicles. The Adler German tankers are actually DAK. But I'll be using them for Europe, from Italy and Russia, where their apparel should fit anyway, to the Western Front, where I'll be using a little licence. 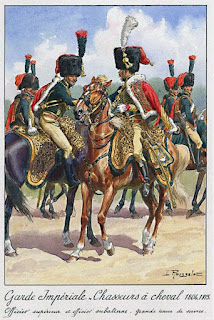 Chausseurs a Cheval of the Guard, by Rousselot.

Book wise, I bought a large and very nice hardback called Napoleon's Elite Cavalry, which celebrates the Cavalry of the Imperial Guard, 1804-1815, as depicted in the paintings of Lucien Rousselot, with an accompanying text in English by Edward Ryan. I also got Military Uniforms in Colour, an old Blandford title written and illustrated by Preben Kannik, which is a book I used to get out of my village library as a kid. A real hit of nostalgia! Ah, the memories this evokes!

Although I'm not currently reading as much as I once was on the subject, I'm still deeply into the Russia 1812 campaign, and hoping to start making inroads into painting my mountains of 6mm and 10mm figures for these campaigns. And in relation to this I still seek out books on the subject. On this occasion I bought With Napoleon In Russia, 1812, by Lt. Vossler, a Würtemberger. (I have so many books on Russia 1812 I'm a little worried I might already have it!)

As mentioned above, usually I'd have my iPhone or iPad on me, and take a bunch of pics. But this time I had neither, as both are suffering with recharging issues. On the one hand I wasn't as impressed with the games this year as in some previous years, but on the other, a show report with no pictures of the many games seems like a failure on my part! Never mind. I enjoyed the show and came home with some fab swag. 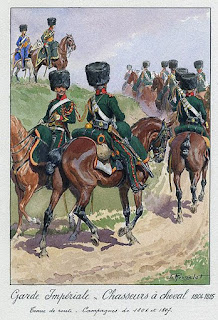 Chausseurs a Cheval of the Guard... 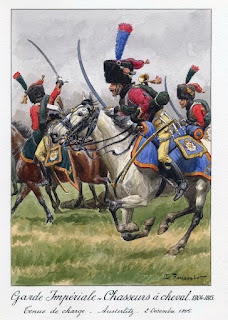 the kind of stuff that got me so excited about this era... 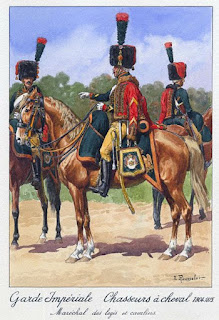 I mean, come on... talk about martial splendour epitomised!

Perusing the Rousselot paintings once home in the evening - and I only managed the Chausseurs a Cheval before exhaustion did for me - I realised that this purchase alone made the whole trip worthwhile!
Posted by Seb Palmer at 12:49