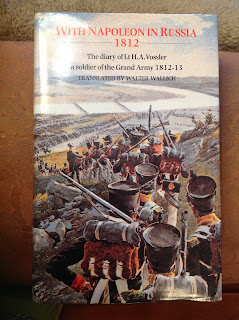 I bought this book at Partizan, on Sunday, and began reading it the very next day. It's Wednesday lunchtime, and I've just finished it. Hopefully that conveys how much I've enjoyed it? Whilst it's not quite as exciting or colourful as the very best Napoleonic/1812 memoirs, it is nevertheless a solidly readable account.

Vossler was an officer in the Duke Louis Chasseurs, a Würtemberg cavalry unit. Separated from his compatriots, under the command of Montbrun he served alongside French and other 'allied' troops. Although he got as far as Borodino, taking part in the southern portion of the battle, he didn't get to Moscow itself. 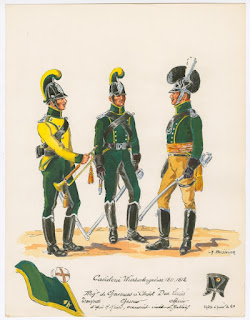 His account is very down to earth, and mixes observations of the lands he moved through, their towns and peoples, with his own wartime experiences, a great deal of which are concerned with movement and billeting. Wounded at Borodino, his part in the retreat cannot have been much fun, as he also had typhus/dysentery and the accompanying diarrhoea, conditions which would contribute directly to the deaths of many on the advance as well as the retreat.

I like this memoir because it doesn't end once he gets home, one of the few lucky survivors of the Russia 1812 debacle, but continues as he returns to service in the 1813 campaign. However, not yet fully recovered, he's captured when a reconnaissance mission goes wrong, and spends the rest of the hostilities being shepherded around Poland and Russia along with other prisoners of war.

This isn't amazing if you want great detail on any of the battles, even those he took part in. He was at Smolensk, for example, as well as a Borodino. But he doesn't even attempt the grand overview - and I'm thankful, frankly, as plenty of others do (and not always very well) - instead sticking to the localised stuff he was involved in. But it's great for conveying day to day life as a Napoleonic soldier.

Of the officer class, he seems as concerned with food and lodgings, and the usually deploarable state (or indeed absence) of both, as he is with war and soldiering. I love these sorts of books, as they really bring the era and the conflicts to life very vividly. His writing style has been very well rendered in Walter Wallich's translation, avoiding the stodgy style that mires some similar accounts of the same vintage.
Posted by Seb Palmer at 18:21