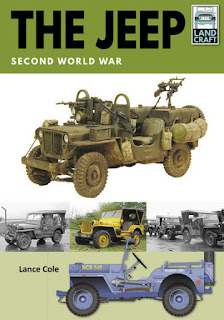 With this title on the iconic Jeep, Pen & Sword launch a new series called Land Craft, a companion to their already well established Tank Craft series. The Jeep is an excellent place to start, being one of the most recognisable vehicles of WWII (and beyond). Indeed, it's iconic position is such that it's been used as the logo for the Land Craft series, in the top right corner of the cover.

I've been lucky enough to receive a new copy from the publisher, for review. I'm really chuffed to be getting to review a fair amount of books on a variety of Pen & Sword imprints. And thus far I've loved and been very impressed with pretty much everything I've read. So much so I've rated practically all of them around four to five stars. Alas, this title hits the first bumps on this particular road!

It's still a book worth having, primarily for the visual reference, and secondarily for the model-related sections. This said, the non-model related picture content is not up to the usual Tank Craft standards, mixing WWII period photos with more contemporary images apparently randomly, with too many of the latter. And within the latter there's too much repetition of images of the same vehicles. 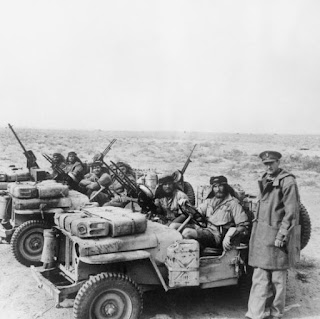 A very well known image, of a Jeep in British North African service. 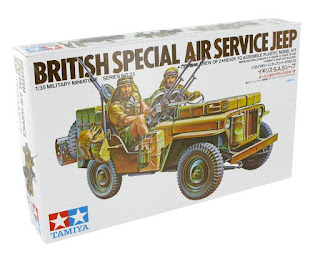 But where this particular title differs most is in the text, which is very poor, in my opinion. I mean no offence to author Lance Cole. He obviously loves his subject, and doubtless knows a lot about it. But it simply doesn't read well. I've struggled to about half-way through the written part, and given up. It's headache-inducingly prolix, meandering around aimlessly and constantly repeating information. It could be cited as a definition of the phrase 'lumpen prose'.

Although the book is structured similarly to the Tank Craft series - listing the chapter titles shows this to be the case (Development and Design, The Jeep in Detail, Camouflage and Markings, Model Showcase, Modelling Products, In Service and in Action, Variants) - it doesn't read that way. Compared with the lucid, well-structured writing of, for example Dennis Oliver, this text is like treacle. Strict and severe editing is required. Judicious editing from what's here would probably reduce it by 50-60%. But it's so poor a total rewrite would be best. 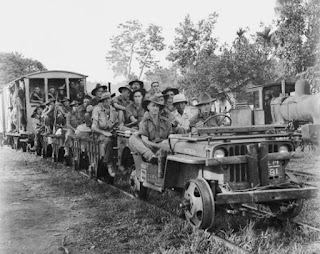 Another Jeep, also in British service; is this Burma?

All the Jeeps in the Model Showcase section are 1/35th. It'd have been nice to see one or two in other scales. Anyway, in conclusion, I'd say that thanks to the imagery herein this is still worth having. But I'd forewarn potential purchasers/readers re the quality of the writing. 'Tis a pity that what will surely be a very useful series (I also have the next one, on the M2/M3 halftrack) gets off to a somewhat shaky start.

---------------
NB: I used to write regularly for the now sadly defunct Drummer (UK*) magazine. I remember several occasions where the editor intervened to temper my criticisms, usually either on account of personal or professional connections between the subject and the mag. So, for example, I was asked to review a particular CD by a certain band (I forget who now, thankfully). I thought it was awful, and said so. However, our editor was trying to cultivate the drummer of this band as a potential contributor to the magazine. My review wasn't used.

I also recall having to soften critiques - or finding them having been editorially softened for me - of products. What galled me most about the latter was that I was prevented from speaking the truth as I saw it, and usually re cheapo gear from big manufacturers, whereas there was a freedom to pan the little independent concerns, 'cause that wouldn't threaten advertising revenue unduly. I mention all this because I want it to be known that opinions expressed on my blog (at least by me, at any rate) are genuine.

* Not the US Drummer magazine, by the way, a gay leather/porn mag!

The following photographs include some great Jeep images... none of which feature in this book, alas: 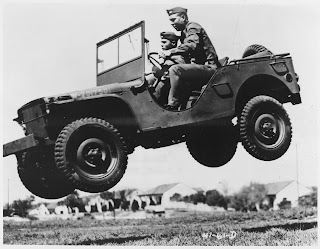 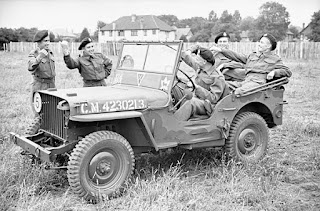 UK or Commonwealth soldiers posed as if thumbing a ride. 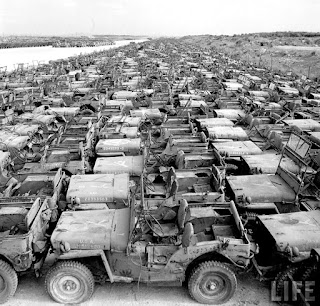 A US vehicle graveyard on Okinawa, '45. 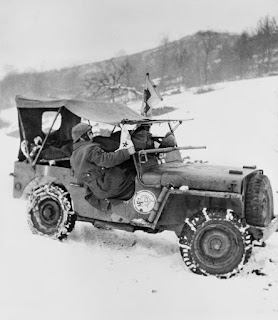 Jeep ambulance. Not sure where this is, or what nation it's being used by? 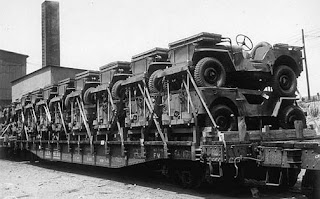 Jeeps roll off the production line and onto the transport supply lines. 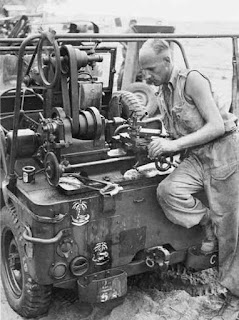 Maintenance work; is that an engine powered lathe? 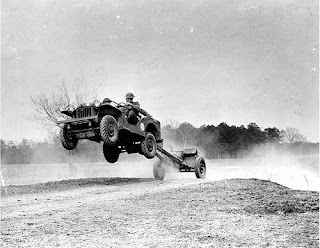 Another Jeep auditioning for the airborne! 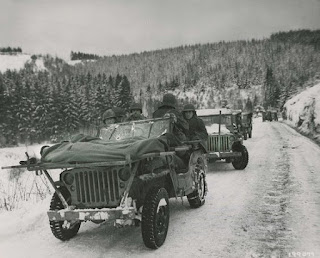 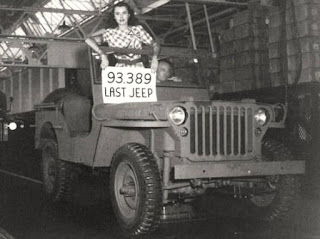 They sure made a lot of Jeeps! 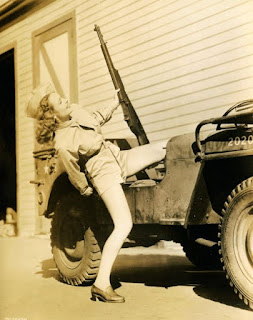 Cole meanders in and out of his timelines all over the place, one minute talking about wartime Jeep history, and often (too often for a book aimed at WWII Jeep modelling) talking about postwar Jeep stuff. But he doesn't include the rather amazing almost James Bond-esque image above.
Posted by Seb Palmer at 20:03