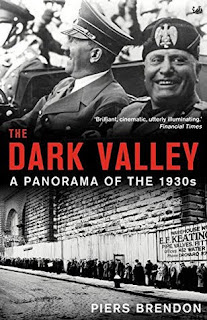 NB This is one of my archival posts, re a book I read aeons ago!

There are a number of detailed reviews of this book online already, so I won't go into any real detail regarding the contents, as it'd be fairly redundant. I simply want to add my voice to the chorus of approval. Like William Shirer's justly celebrated Rise And Fall Of The Third Reich this is sweeping, compelling history that really draws you in. The kind of thing that'll threaten to end your fiction reading. Why read fiction when real world events are so massively interesting? 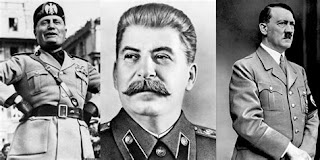 These three would be scary enough individually. But together?*

The 1930s were, of course, the crucible of WWII, with extreme nationalist governments taking over ever larger swathes of the world: Italy, Spain and Japan were joined in this decade by Germany, and all these major powers can be added to the giants of Russia and, to a lesser extent, China. There was the fallout of worldwide recession, and all around the world, but most surprisingly perhaps, in the 'developed' West, liberalism and democracy were in crisis.

As others have noted elsewhere, Brendon has an excellent writing style, and is truly masterful at weaving together complex narrative and small anecdotal details. What a period the first half of the C20th was, with all this and more sandwiched between the cataclysms of two world wars! I borrowed this from a friend many years ago, and liked it so much I had to get my own copy after reading his (in a repeat of what had already happened with the aforementioned Shirer book).

The material relating to Japan is, I find, particularly fascinating, as so much historical literature on this period and the two world wars is so Euro-centric. Also the militarism of Japan differed markedly from that of Russia, Germany and Italy, in that it was much more broad based, rather than being focussed on a singular charismatic figurehead. Indeed, the Japanese Emperor seems to have been carried along on a martial current that flowed through a whole class (the officer class), ultimately more or less saturating the whole culture. 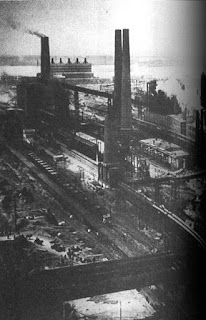 This '30s photo captures the whiff of 'horror film' around the development of Magnitogorsk.

One specific episode amongst the many in this brilliant book that really struck me - haunted me even, for a little while after reading it - was the horror of Magnitogorsk (just the name sounds balefully ominous!), in Stalinist Russia, which was declared a closed city, i.e. off limits to foreigners, in 1937. I won't say why. Buy this superb book and read about it yourself.

* And of course there was Franco in Spain, the militants behind a Emperor Hirohito in Japan, and many lesser tin-pot tyrants in areas like the Balkans.