If you've read my first post on this blog you'll know that the Battle of Waterloo was a kind of entry-portal to wargaming and military history for me. One thing I didn't mention in that first post was that, at some point (I've no idea exactly when), I was given or bought myself an Eagle Annual. To be precise, this one: 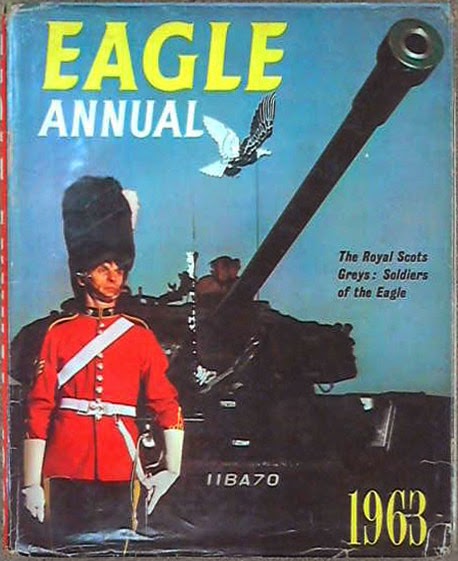 Why I picked out this particular annual, and whether it was because of a prior interest, or whether it seeded that interest, I'm unsure. But, either way, it was the 1963 Eagle Annual, a publication nearly a decade older than me! The cover feature was a Waterloo-themed piece on Ensign Ewart's capture of the Eagle of the 45e Régiment de Ligne. Charles Ewart was a Scotsman, serving in the Royal North British Dragoons, usually known as the Scots Greys, who formed part of the Union Brigade, and whose charge is depicted in Siborne's 'Small Model' (at the Leeds Armoury: see my previous post on this).

Anyway, all that is just a bit of preamble. This is my first post in a quest to locate, share information on, and ultimately visit and admire as many Waterloo themed dioramas as I can. Hopefully by the anniversary of the battle itself this will have become a useful and interesting resource for those interested in such things.

Before posting this I aware of just four. I'm sure there must be many more. If you know of any, please let me know. I'm primarily interested in dioramas that depict large chunks or the whole of the battle, but I'd also be happy to share any smaller scenarios wargamers, modellers and diorama makers might want to share.

The four I knew of already are: 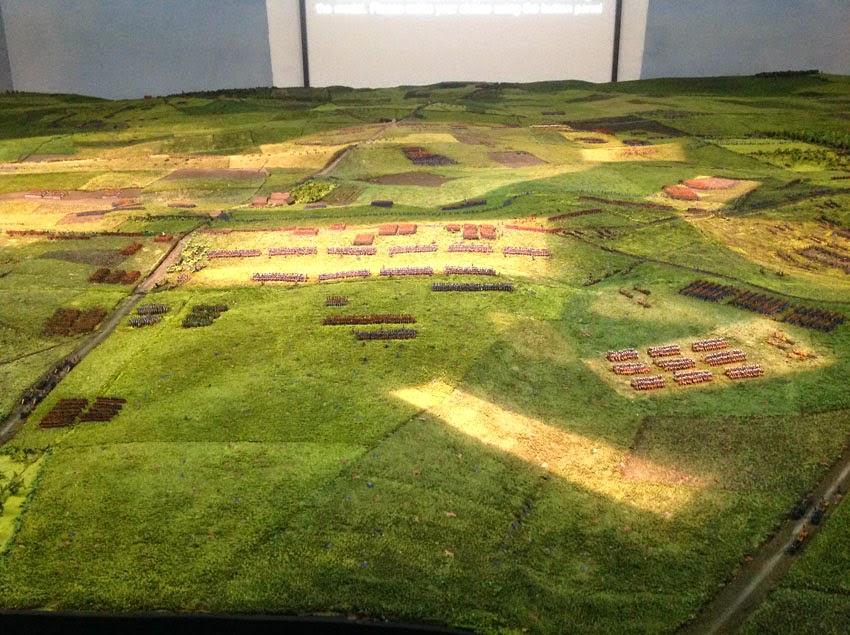 1) Siborne's Large Model: The complete field of Waterloo, including Plancenoit, as things stood at around 7pm. Located in the National Army Museum in Chelsea. Sadly the NAM is currently closed. But the goo news is that the Museum is being renovated/refurb'ed, so hopefully will be even better on re-opening. 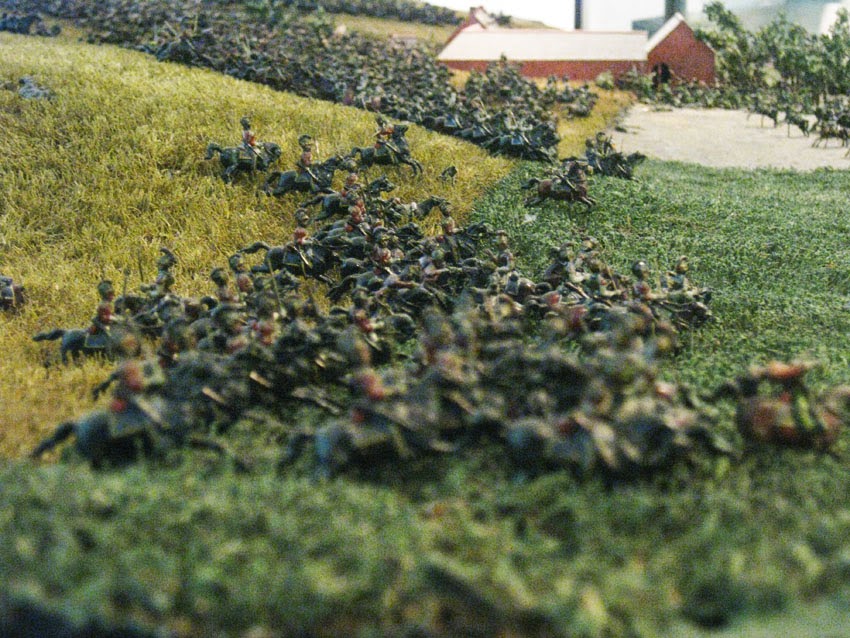 2) Siborne's Small Model: the action around La Haye Sainte, on the Brussles-Charleroi road, with D'Erlon's Division attacking uphill towards the Brussels-Wavre road (which runs along the length of the diorama). This includes masses of French Infantry moving towards the British lines, with the Union Brigade and some wildly excited Highlanders ploughing into their ranks. This is a truly amazing diorama, and considering its vintage, it's even more gob-smackingly spectacular. Currently my favourite Waterloo diorama.

Use with kind permission from André Rudolph

3) André Rudolph's Prince August Waterloo diorama. Featuring 15.000 figures, all cast specifically for the model. In that latter respect this is not unlike Siborne's great works, although Siborne's figures were also specially designed for the diorama, as opposed to Rudolph's use of the pre-existing Prince August range. Prince August have a Facebook page dedicated to the diorama with lots of lovely pics. André also has his own website. 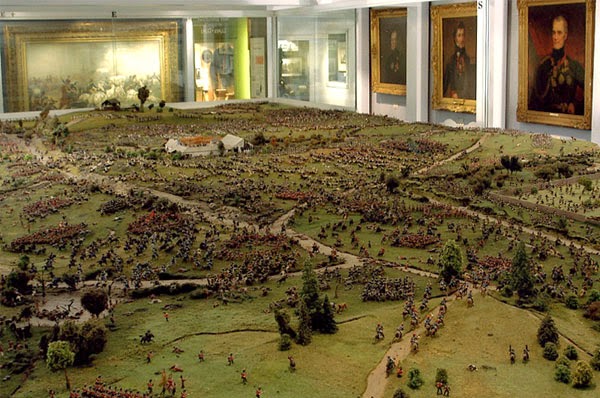 4) Green Jackets Museum Waterloo diorama: this museum, in Winchester, has a large Waterloo diorama which was made, I believe, predominantly using Airfix figures. I don't know much about this one yet, but plan to visit it ASAP. I'll post pictures and more info once I've done so.

As I've worked on this post I've become aware of a number of other Waterloo dioramas. Here are a few links to some pages with tantalising pics. There are undoubtedly loads more, and I'd love to hear about them.

5) A guy calling himself deadhead has posted some amazing pics of a very impressive looking diorama. Who can tell me more about this one?

6) Then there's this one, which I can only find active stuff on as recently as 2011. Posted by someone going under the of Waterloo, aptly enough.

7) A guy posting as Igor13 in Belgrade also has a smaller diorama, which you can see some pics of here.

8) A fellow called Hill de Gooyer in the Netherlands, with help from his sons, is apparently building one. Images can be viewed here. 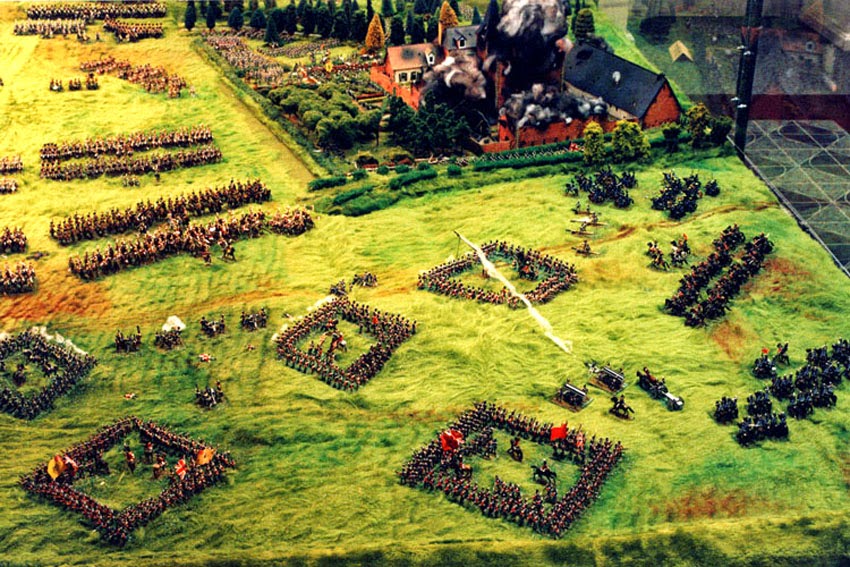 I really dig the smoke from the artillery: the streak of smoke near the centre of the image is the trail from a Congreve rocket... cool!

9) Here's one from Utah, in the good ol' US of A: the pics are on a site (there's a whole gallery of excellent pictures) billed as 'History Live, with the diorama, on a '12 X 12 foot table showing the west 1/3 of the battlefield', in a room emblazoned 'Waterloo: The legend'! The diorama and the whole History Live multimedia experience are, amazingly, a 'travelling show'!

I'm not sure if this one is already amongst those listed above, but it looks great, and is by Hans Slaager. Typing Waterloo diorama in the YouTube search window brings up loads of stuff, but much of it isn't very clearly explained, as to who made it, what it depicts, the scale used etc. I'm hoping this and subsequent posts on this theme might remedy that!

There was aslo a link on one of the sites I found to a diorama in Canada, at a place called Miniature World, which appears to be a whole building given over to dioramas, with a military section called Fields of Glory. A look at this site suggests that currently on display are ACW, AWI, WWI and WWII dioramas, but not Waterloo. If they still have one, surely it'll come out in 2015? 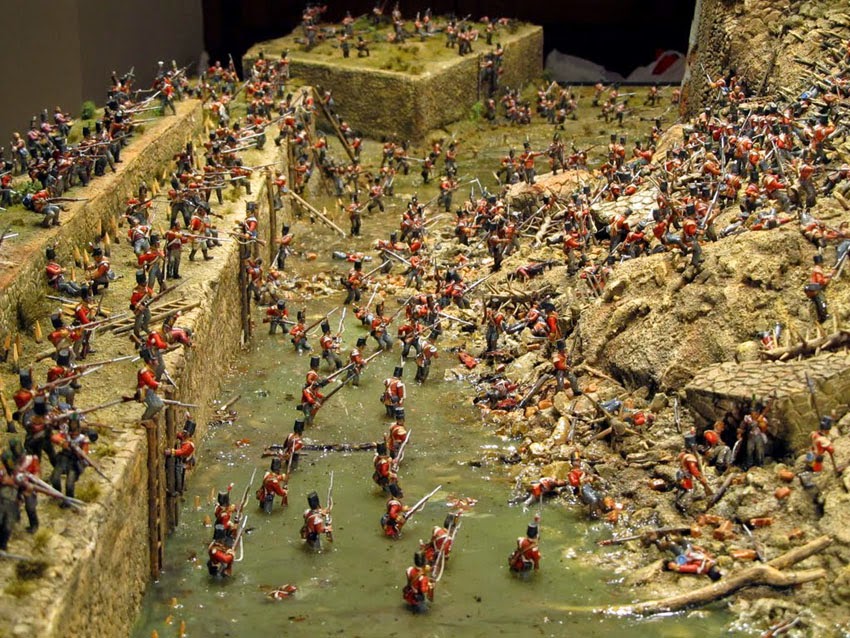 During my web-trawling for Waterloo dioramas I stumbled across the work of a Spaniard called, I think, Maximo, or 'Curro'. His blog has some stunning models - it looks like he makes these for museums - including large models of actions at Trafalgar and various Peninsular scenarios, including the one pictured above, depicting English troops attacking the Trinidad bastion at Badajoz... incredible work!
Posted by Seb Palmer at 13:26