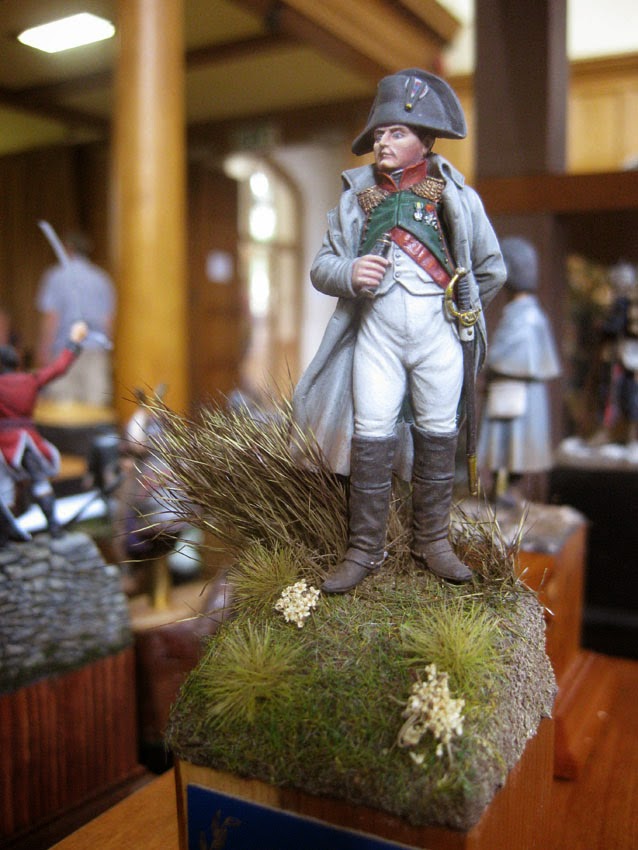 Last Saturday, 19th July, Teresa and I visited Figure World for the first time. In the beautiful setting of Oundle School, itself set in the very picturesque village of Oundle, enthusiasts for figure modelling put on a show that's still quite new, and is, apparently, the only UK show solely dedicated to figure modelling. 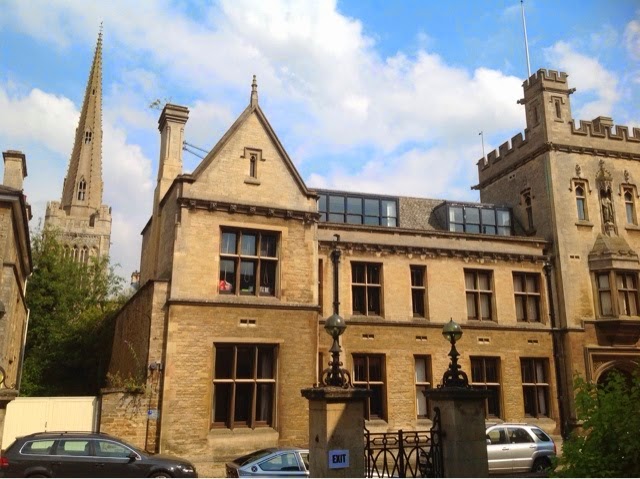 This is actually the view looking out from the venue, but it's still part of the school, and gives the flavour of the setting.

I was there to further work on my Perry 'Bonaparte Crossing The Alps' figure. I wanted a wooden base, and some matt enamel. A pretty short shopping list for me! I was tmpeted by some nice but pricey 54mm metal Napoleonics, and also some superb books on modelling trees, by Gordon Gravett. But I managed a rare feat of self control, and only got what I'd originally intended to buy. Phew! 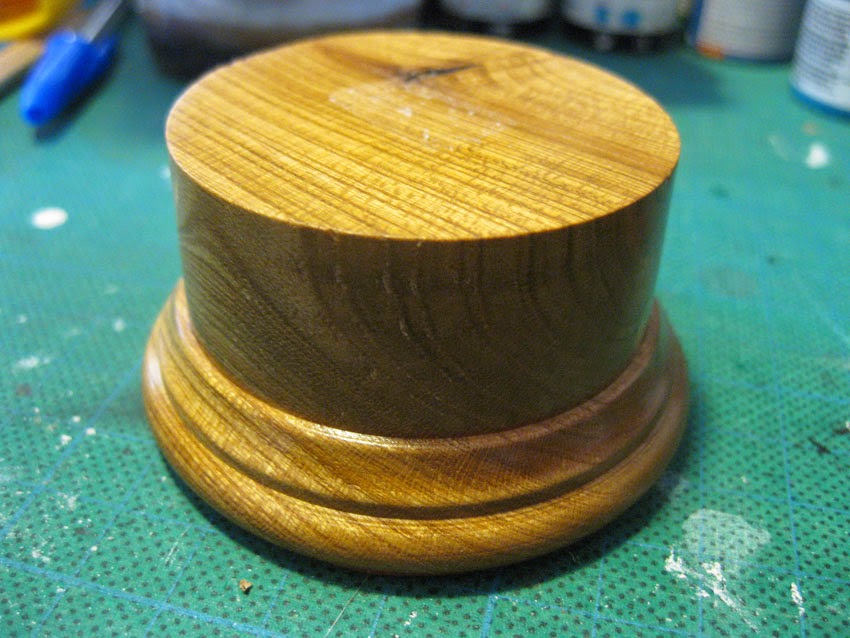 The wooden base I bought. Laburnum, apparently!

Today I boldly embarked upon the next, and to me the scariest step: modelling a scenic base. I've never done anything like this before. Even the bases for wargaming figures I made over two decades ago, when I originally built up armies as a youngster, were nothing like this is intended to be. I want to emulate the rocky ground in the David Painting. I'm also setting the miniature on a round wooden base, so I needed to somehow cut out a neat circular section of the rocky scene. 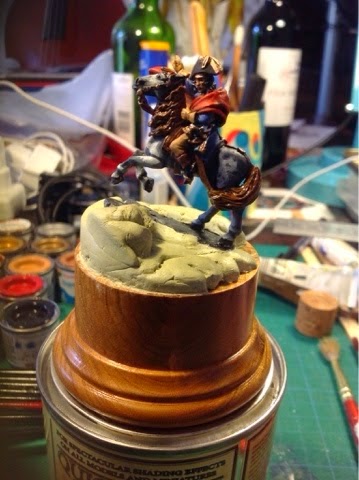 I wanted to use the modelling of the rocky setting as an opportunity to tilt the horse into a more reared-up pose, as per the painting. The figure as is, if based directly onto a flat surface, is in quite a different pose to the very alive and energised David renderings.

In the end I used some yellow/grey Milliput. This Milliput is as old as some of my older Humbrol enamel tinlets, i.e. over 20 years old, minimum! But, amazingly, it's still usable. Having mixed the epoxy materials together, I started modelling a sloping disc, using various knives and sundry other tools. I then used a plastic lid, from a cylindrical spice container, which I'd found was more or less the perfect diameter, and cut into the Milliput, cookie-cutter style. 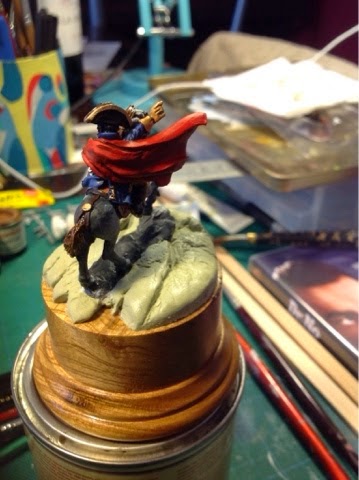 I like this view, as it shows clearly the jagged rock edges that I've modelled in the style of David's Belvedere painting.

I superglued the Milliput to the wooden base, and went around the edges attempting to tidy them up. In the process my nice clean cut cookie-edging lost a bit of its sharpness. But I'm satisfied, especially as this is a first ever attempt. I then put a it of superglue on the base, and pressed the painted figure into the Milliput 'rocks', before going to work to try and achieve a satisfying balance between preserving aspects of the sculpted base, and integrating it into my David-style rock scene. 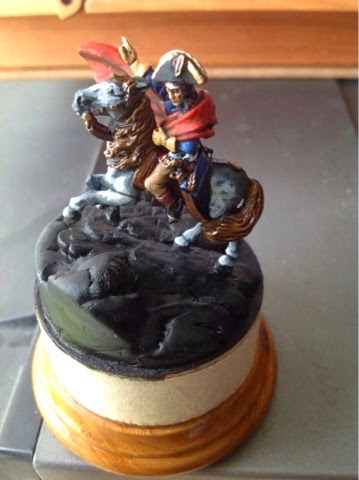 Where the integration of the figures' base and the Milliput rocks looked pretty clumsy when unpainted, I think this black undercoat draws it all together quite nicely.

Impatience then lead me to paint the Milliput, after it'd only sat and 'gone off' for around about one hour. So far it's just had one coat of 'Umbrol matt black. Tomorrow I'll work on painting the rocks. Then I need to varnish the whole thing - figure and rocks, but not the wooden base - which is another stage I'm a bit worried about: as the figure stands (I know, I know, he's actually sitting!) I've used a mix of matt, satin and gloss paints, not to mention several metallic colours. 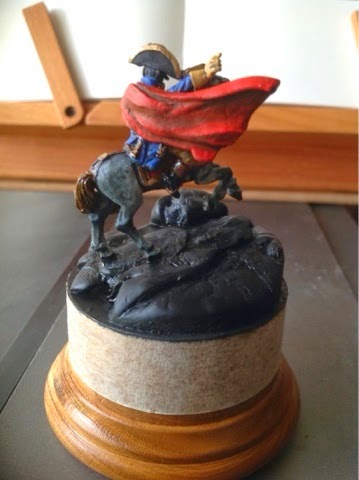 A guy at Figure World sold me a spray can of Testors varnish. It doesn't actually say what finish it is anywhere I can see, rather alarmingly and annoyingly . I did specify matt... so I very much hope it is matt! I'm feeling very chary of spraying Boney and his horse, as I don't want to wreck all the paint work with a uniform lacquer. But I need to do domething, as the Army Painter Quickshade wash I used on the mane and tail is a bit glossy/shiny, and I don't like that!

Once the base is modelled and painted, I think I'll commission an engraved 'plaque'. I got the contact details for someone who can do that at Figure a World as well. So it was a useful trip! Below are a few examples of the kind of eye-candy that was abundant at this show. There was all sorts of stuff, but I continue to confine myself mostly to Napoleonics. 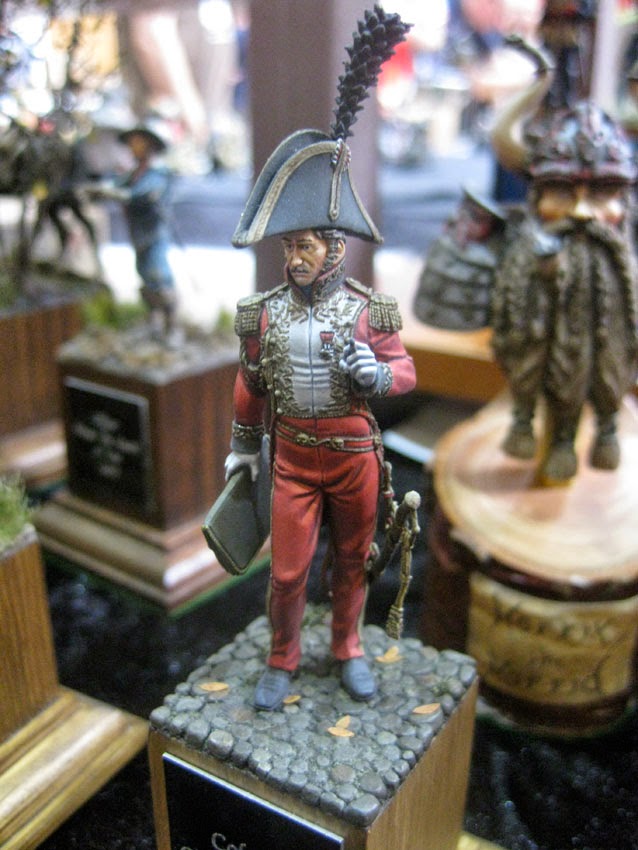 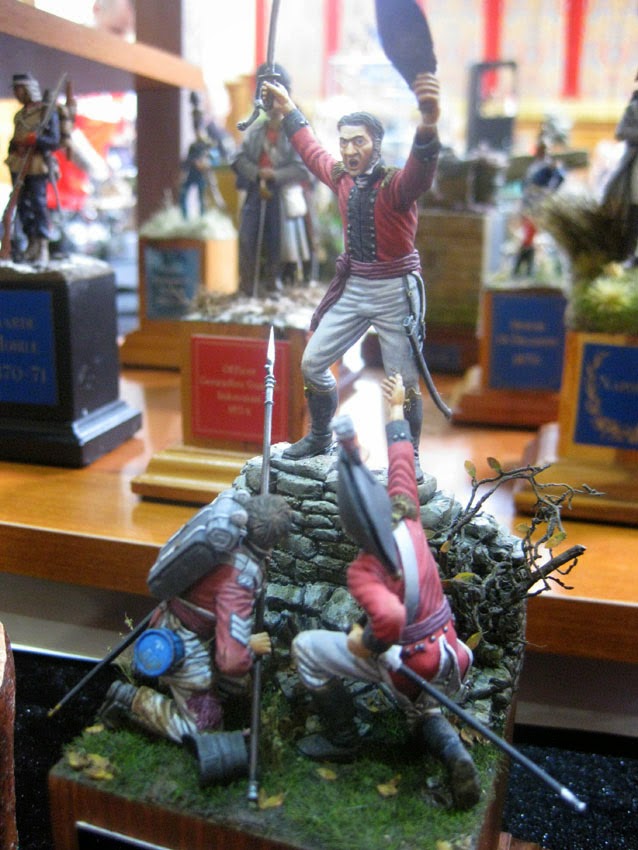 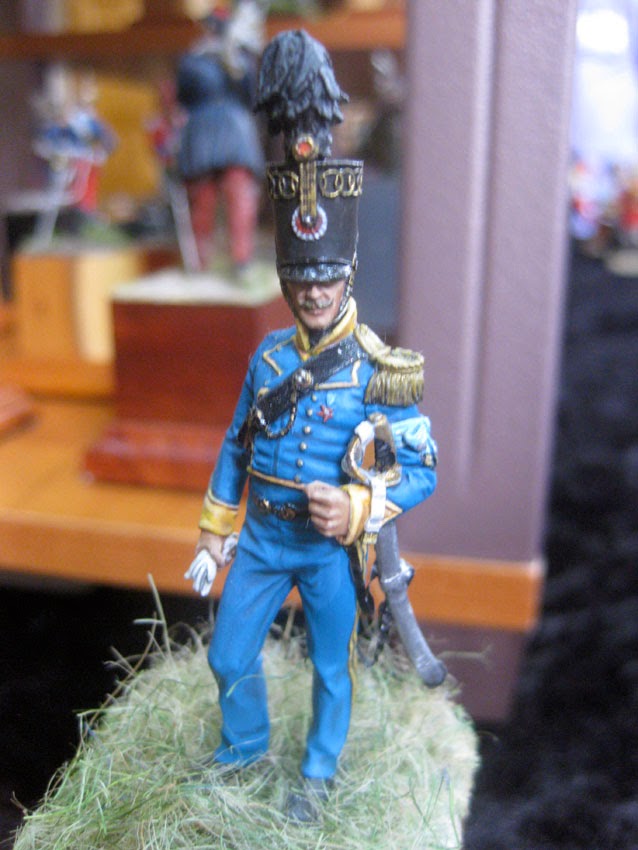 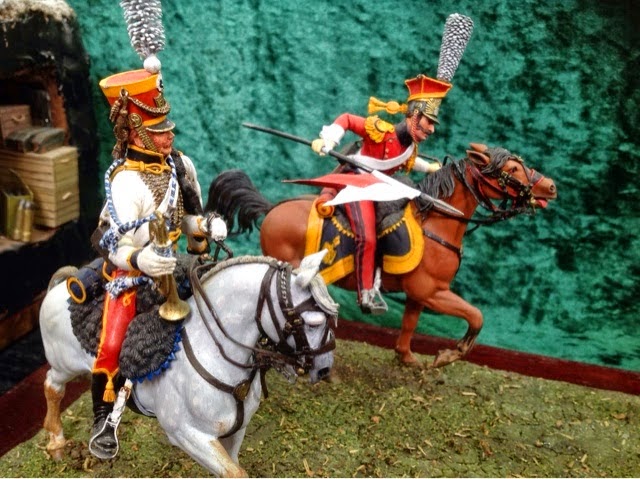 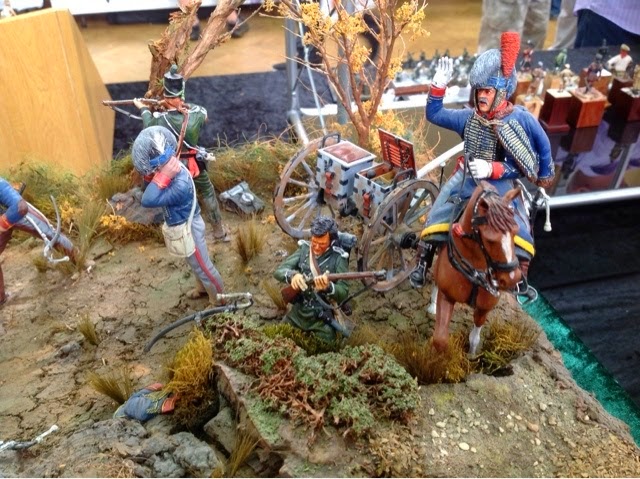 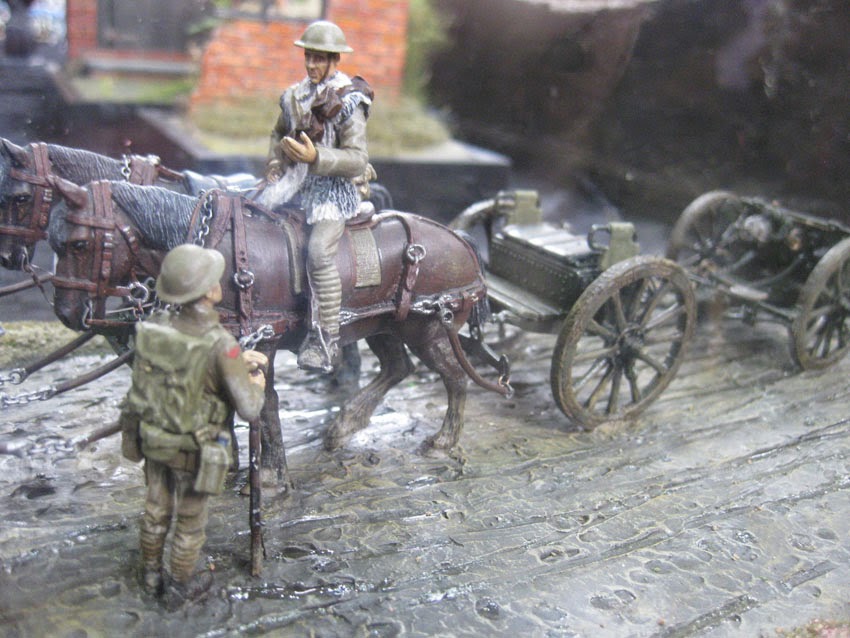 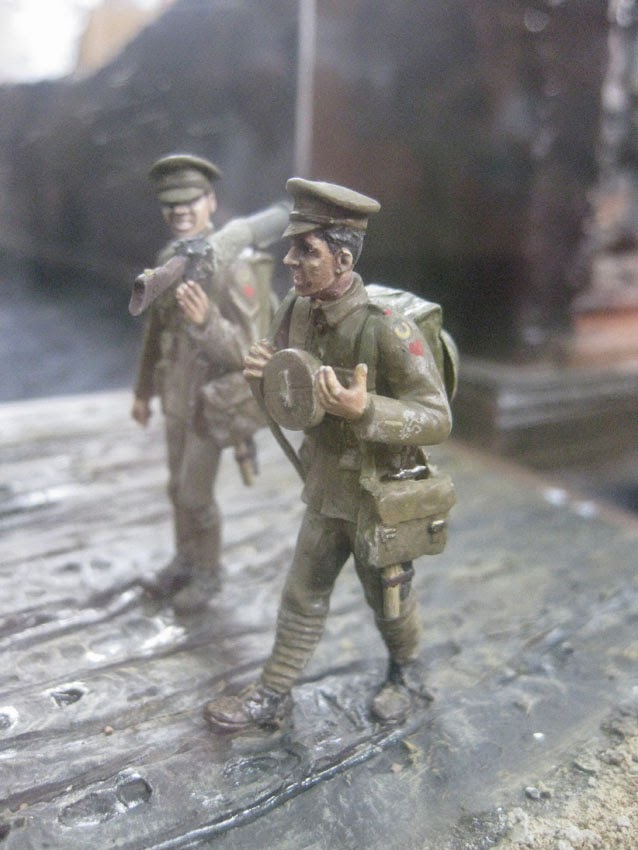 I couldn't resist the WWI artillery diorama though. There was also a guy at the show trading as Tommy's War, and his WWI figures were both very impressive and highly tempting. And that's saying something for me, as it's a period I'm not much drawn to as a rule (mind you, I do like German lancers mit pickelhaube!). I also very much liked this WWII 'Landser' as well, modelled on a photo from the German Signal magazine. 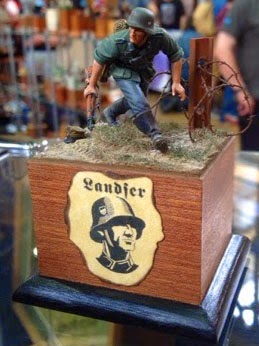 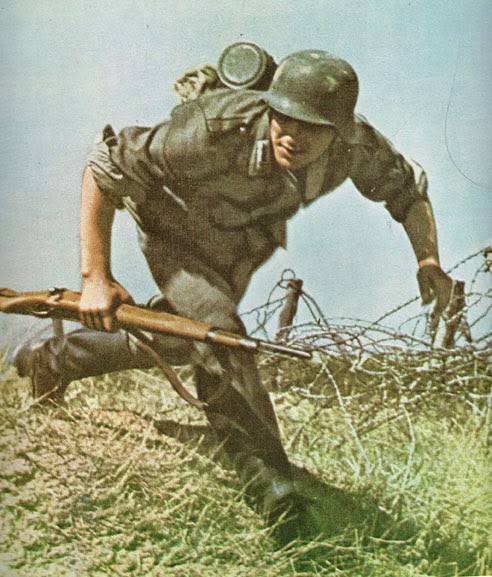 The photo that inspired the model, from my copy of Swastika At War (Hunt/Hartman).

This post was originally done from my iPad, using the Blogger App. Looking at it in Safari it needed some serious editing. When I publish from my desktop at home I always Photsohop pics etc., to get stuff sensibly sized and reasonably consistent. Publishing via the Blogger App seems a bit less finessed! Still, it's another option, and trying to publish via Safari from the iPad has problems of its own! But I've been back over this to tidy it up.
Posted by Seb Palmer at 22:00