At one of the shows I attended in the last year or two, possibly/probably Salute 2013, I discovered a cache of old wargaming magazines, including a tranche of Miniature Wargames dating back to the time when I began buying that magazine. This was the first wargaming magazine I ever saw (The only other similar mag I'd seen prior to this was Military Modelling, but I'll go into that another time.), let alone bought. In a fit of nostalgia, something that I see from my time online and at shows appears to be fairly commonplace amongst us, I bought all the issues that I believed I may have formerly owned. 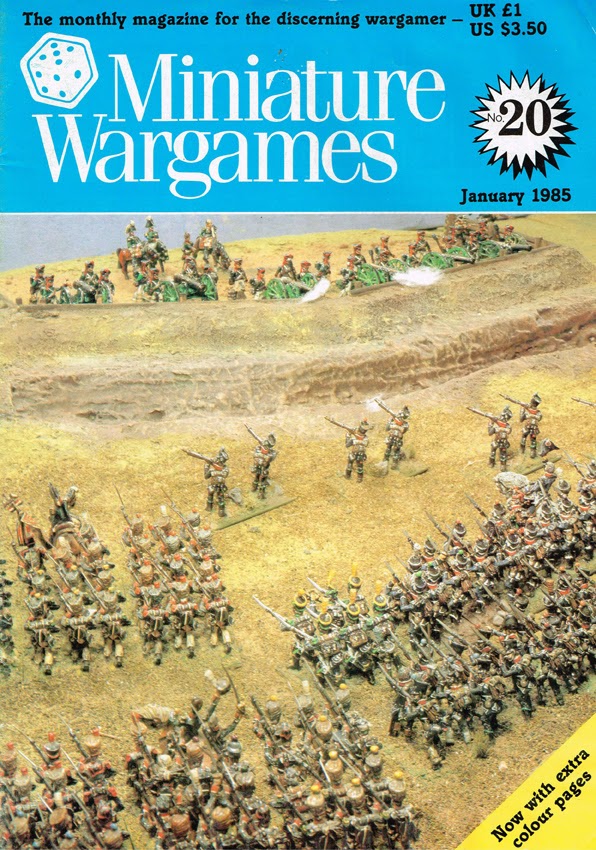 MW#20, Jan. '85: the first wargaming magazine I ever bought. The cover show the French attacking the Redoubt at Borodino. Did this, my first wargames mag, sow the seeds of my current 1812 obsession?

Reproduced Above is cover of the earliest issue I have in my current collection, which was also, I believe, the very first issue of the magazine that I ever bought, way 'back in the day'. It's issue #20, from January 1983, the month in which I turned thirteen. My oh my, how long ago and far away that now seems! Actually it was 29 years ago, and a little shy of nine miles away, the latter according to the AA's online route planner.

Reproduced below is an advert for Minifigs, from the same issue, and of a kind I saw regularly and grew to be enchanted by. I liked ads that featured decent pictures of the figures, as I felt better informed thereby about any potential purchases. I still prefer to order figures knowing what I'm getting. As is explored by others in an interesting thread on TMP (In any scale, what's the worst Napoleonic figure?), I too was stung once or twice, in my callow youth, by buying sight unseen. Once I started buying this mag regularly (-ish), Minifigs were to ultimately become the main source of my Napoleonic figure collecting. 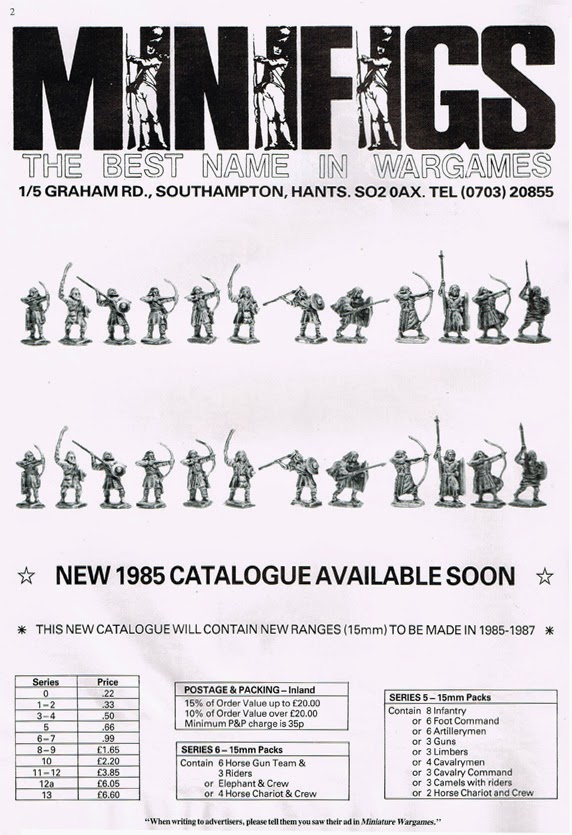 A Minifigs ad from the same issue. I love their title font, with the figures in the I's.

Miniature Wargames often featured figures by or from the collections of guys like Peter Gilder and Doug Mason, both as cover art and feature illustrations. I usually only bought copies of the mag when Napoleonic scenarios were featured on the cover. Anyway, in the last few days I've been consumed by an obsessive passion for the history of the hobby, and also the history of my relationship to that. I was amazed and intrigued, for example, to find out that Salute is the same age as me, both having 'started' in 1972.

I was even more amazed, dumbfounded even (well, almost!), when, turning the pages of this first copy of my first ever wargaming periodical poichase, I came across the following feature: 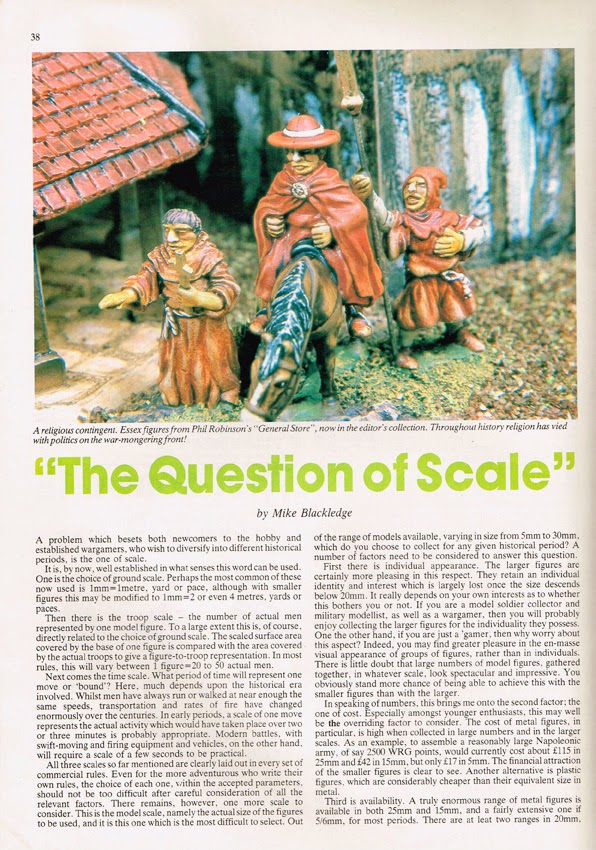 Is there where I got the title of my blog? 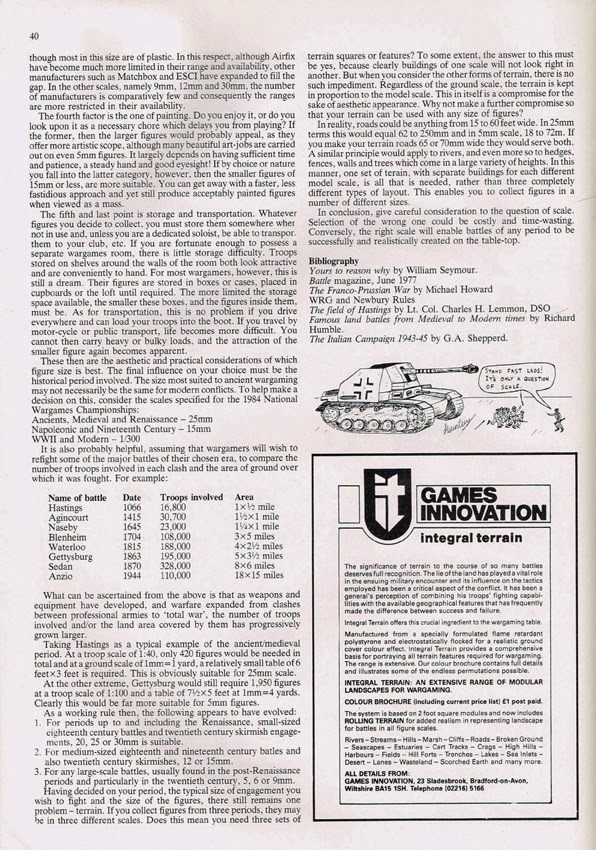 The article, by Mike Blackledge*, is excellent, addressing all the themes I intend to address here (in the fulness of time) very succinctly.

... had this lain dormant in my mind, seeding the idea that ultimately gave me the title of this blog? I have no idea, if I'm honest. But I do like the almost evolutionary-cum-genealogical feeling that finding and reading this gives me. I feel as if, in digging deep into the past of the hobby, I'm rediscovering myself. It's a great feeling!

* Can anyone tell me anything about Mike Blackledge? Searching for him online has proven fruitless, in terms of finding anyone of that name with clear wargaming links. 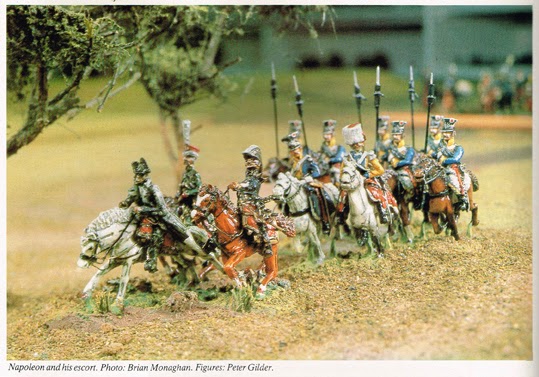 One of the many things in these magazines that I always loved, but in this instance was also perplexed by, was the gloss finish on Gilder's Napoleonic figures. I note now (not sure if I'd spotted this back then) that his WWII stuff didn't seem to have undergone the same treatment. Ruminating on these themes over the past few days lead me to discover some delightful blogs, such as DC's superb 'unfashionably shiny', which in turn lead to me finding Doug Mason's blog.

A parallel line of inquiry was developing, regarding the decline of the wargamer's high street shopping options. In my home town of Cambridge there have been, over the years, several shops selling 'toy soldiers'. The ones that chiefly figured, if you'll pardon the pun, in my life as a youth were, a model shop whose name I forget, on King Street, where I could buy Airfix 20mm plastics (and Tamiya 1/35th, etc.), Games & Puzzles, on Green Street, which sold Citadel fantasy stuff, and The Toy Soldier, the most short-lived of them all, on Bridge Street, where I could even get, for one blissful if short period, packs of Minifigs Napoleonics. 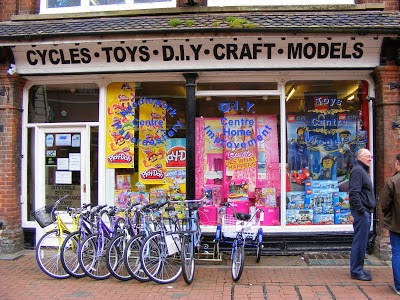 The only shop of this ilk that remains anywhere near me, at least as far as I know, is the wonderfully old-fashioned Ely Cycle Centre, which sells all sorts of stuff, from bicycles, to Lego, dolls, model kits and yes, even wargaming figures. When I went looking for pictures of the shop online, to illustrate this post, I found a fellow calling himself Fraxinus, and one of his blogs has an excellent little photo-essay tribute to the shop. So, having borrowed one of his pics to show you the shop-front, I'd suggest you click the foregoing link if your interest is piqued.

In Blackledge's brief but fascinating article, he discusses how things stood back then, enthusing about the massive range of options the gamer had. Right now we have even more to choose from, in every sense, from figure-scales to periods. All of this was swimming around my brain at the same time as the parallel line about disappearing shops of yesteryear. And in this connection I discovered that the London shop Tradition, which only closed very recently, had an affiliated factory in Royston, just down the road from me. 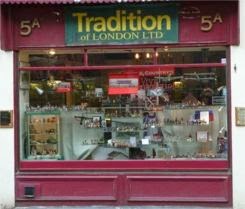 Did I ever actually visit this shop?


All of this makes me somewhat rueful about my long absence from the hobby, as I'd dearly have loved to have visited the London branch of Tradition before it closed. I might have done so: I have dim memories of visiting a shop selling toy soldiers (one of the strongest aspects of my memory is of a dark reddish coloured shop-front: but I remember walking between the museum and the shop, and I don't recall the river intervening... hmmm!?) when I once visited the Imperial War Museum.

Also, as a freelancer with my proverbial finger in several pies, I'd love to have spent some of my time earning money painting figures for the Royston-based production wing. I did actually do some paid figure painting in my teens, for a company that was based in Wisbech. Who would that have been I wonder? If only my memory was less foggy!

All this nostalgic exploration eventually lead me back even further, to stuff that predates my own involvement in the hobby. And I find now myself, somewhat to my own surprise, quite drawn to some of those older figure ranges - I spent quite a bit of time exploring Peter Laing figures, a development initially sparked by the above-linked thread on TMP, where they get a thorough drubbing - like early Hinchcliffe, Minifigs, and Hinton Hunt. When I found the following picture of Marcus Hinton outside his shop I felt as if I was entering some kind of sublime Mr Ben fantasy wargaming world! 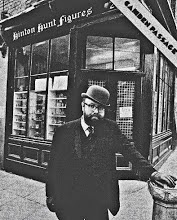 I Intend to explore this 'olde-worlde' of wargaming by buying some copies of the Tradition magazine, which is being reprinted (quite probably via print-on-demand), and perhaps even getting a Hinton Hunt collection started. The above picture comes from a brilliant blog on things Hinton-Huntonian: Hinton Hunt Vintage Wargames Figures. For all that we've lost the high street shops themselves, it is wonderful that modern technology is making finding out about all this stuff and connecting with other enthusiasts that bit easier.