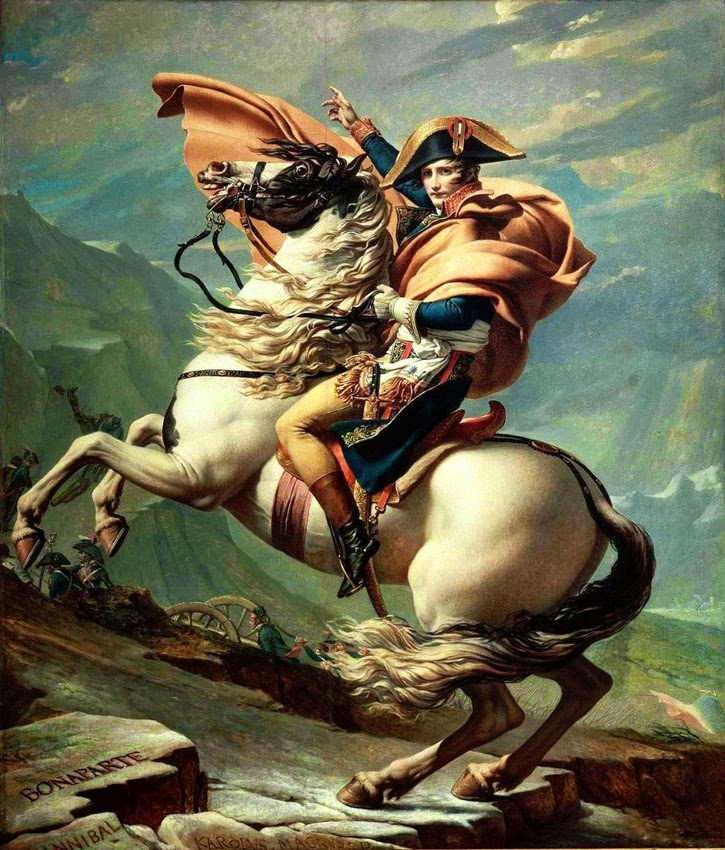 Jacques-Louis David's 'Napoleon Crossing The Alps' is one of the most iconic paintings from that colourful era that bears the name of the man also known as 'Le petit Caporal' and 'The Corsican Ogre'.

This painting features on many books about the Napoleonic era, unsurprisingly (and is currently the screen-saver on my various mobile devices). But the image hasn't just become popular over time: in Napoleon's and David's own time it was also immensely popular. So much so that David ultimately painted five versions of it. 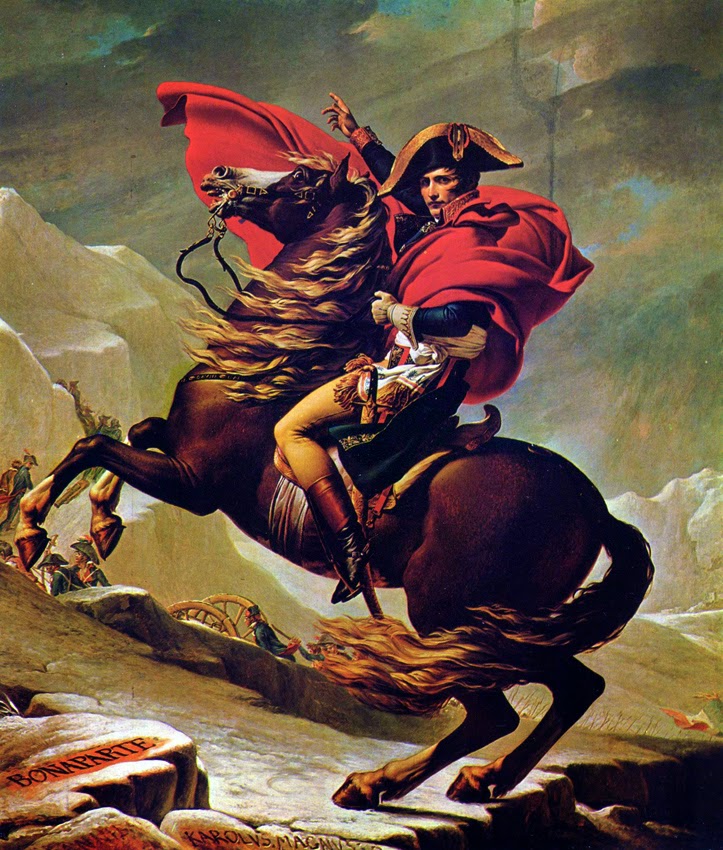 When I returned to the hobby, I was on a mission to find out if someone had sculpted this fantastic image as a miniature. I felt sure someone must have. And in the end, after buying a few other Napoleons, such as the Warmodelling 'Borodino' 15mm figure pack (Napoleon seated on a chair with one foot up on a drum, accompanied by a telescope-wielding ADC), I learned that yes, there was such a figure. 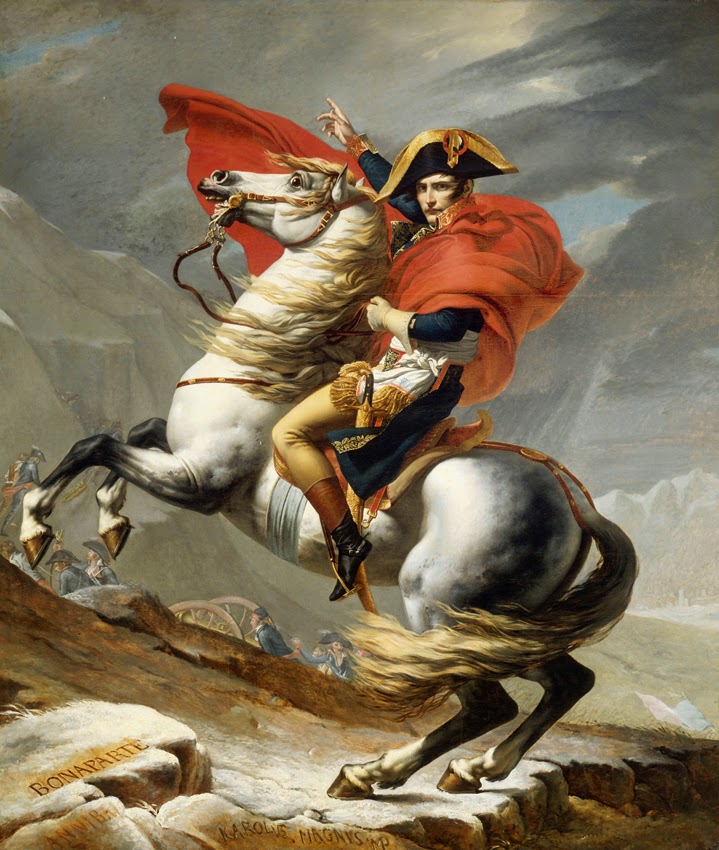 Made for Salute (I don't know which year), and sculpted by one of the Perry twins, it was also sold as a limited edition by Foundry, raising money, if I recall aright, for a charity in aid of an ailing friend in the industry. Every show I went to I'd buttonhole and badger anyone I thought looked like they might know about the figure, and ask how I could get one (I don't do eBay, so that was out).

And finally, at last years Salute I got lucky. I can't recall who it was - if the guy who posted the figure to me reads this, please remind me who you are, so I can thank you in public! - but someone I mentioned it to said they had a spare of this figure, and would post it to me for a modest amount (and it was modest, probably very little over the postage cost). 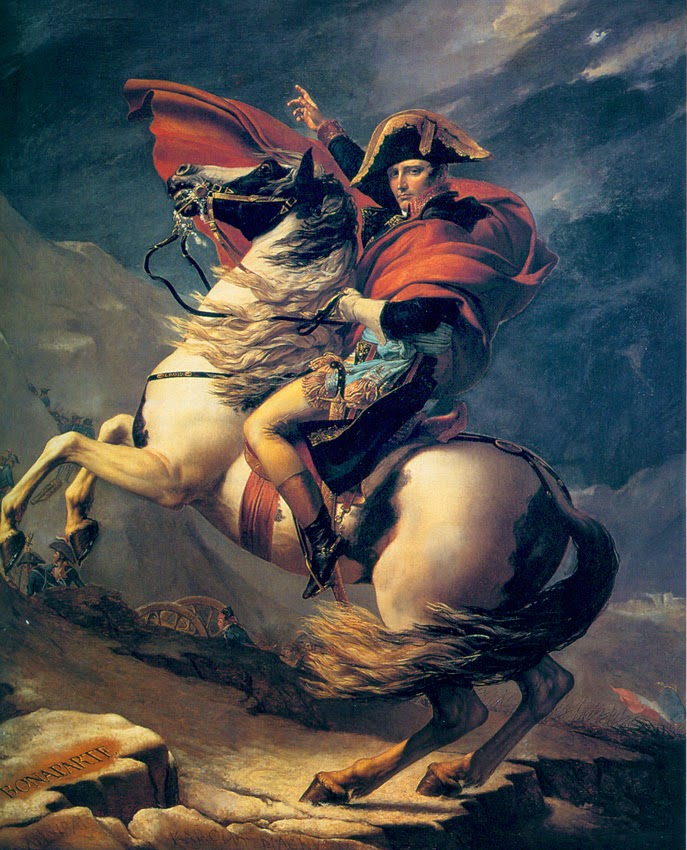 Having had the figure for some time now, and having nearly gone mad and blind painting a bunch of 6mm stuff, I figured a break from the micro-world would be good. I spent a while perusing the various David paintings, cogitating on which one to work from, and eventually plumped for this one: 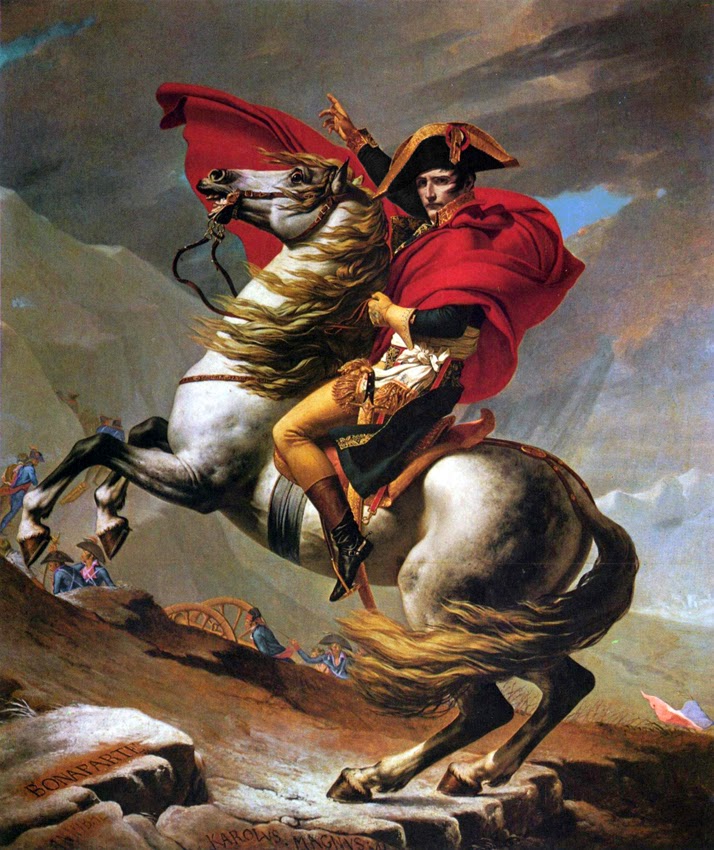 ...known as the Belvedere version, because I like the colours and the contrast in this reproduction best.

I did consider amalgamating aspects of several, and in the end I probably will have done so, to some limited degree. My choice was also governed in part by liking the white/grey horses better than the piebald or the brown.

I contacted the Perry's via their website, to find out a bit more about the figure: Who'd sculpted it? When and who for? Is it still in production? Alan very kindly replied. Here is the relevant part:

'I made it many moons ago, in the early-mid 90's I think. It was for charity, connected to someone who worked at Foundry. If anyone has the mould it'll be Foundry.' 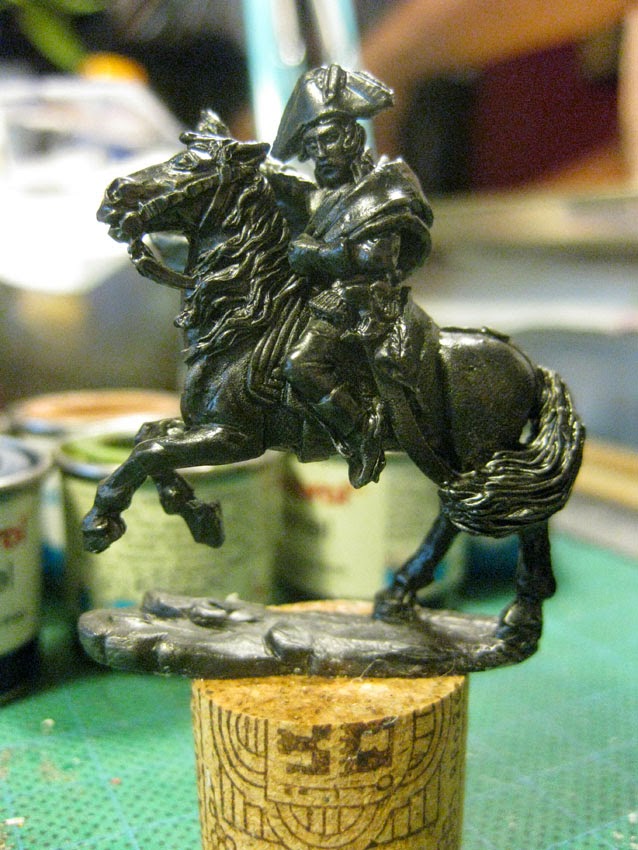 Having applied a black undercoat not long after receiving the figure, I finally started painting it properly last Saturday, blocking in some base colours. This whole paint job, like all my figure-painting at present, is done entirely using Humbrol enamels. 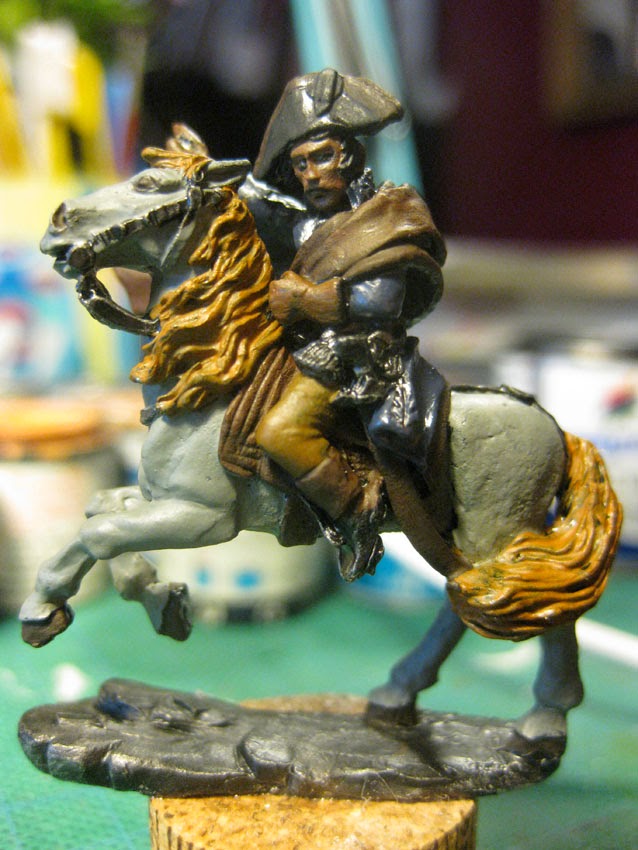 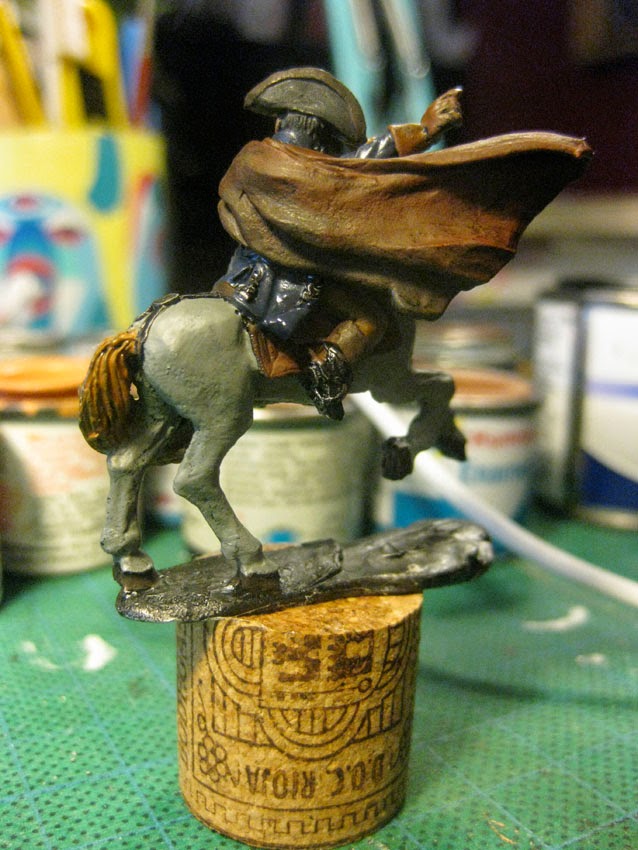 Then, on Sunday, I worked a bit on the horse. Both of these occasions were very time-limited. 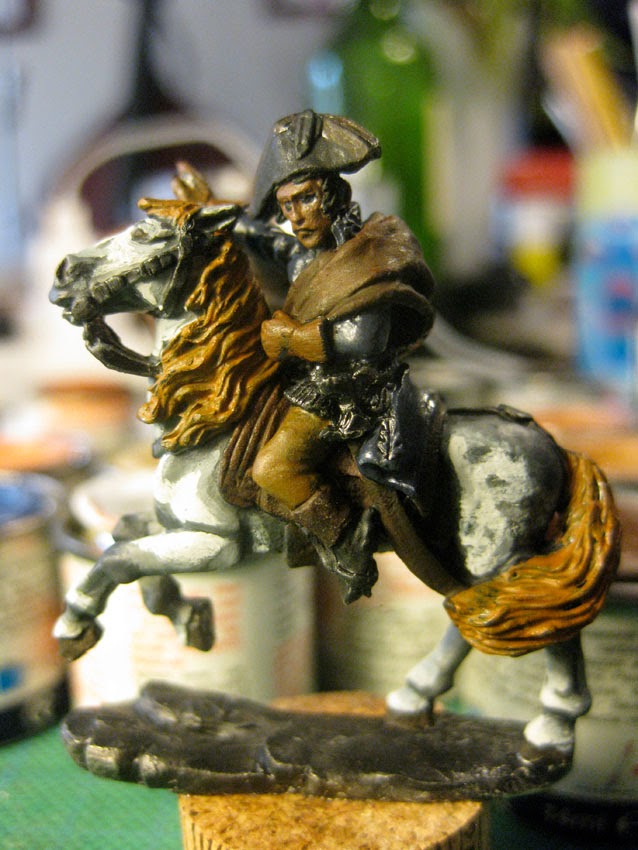 And only today did I finally get a good few hours to work at it, in a leisurely yet intense way. 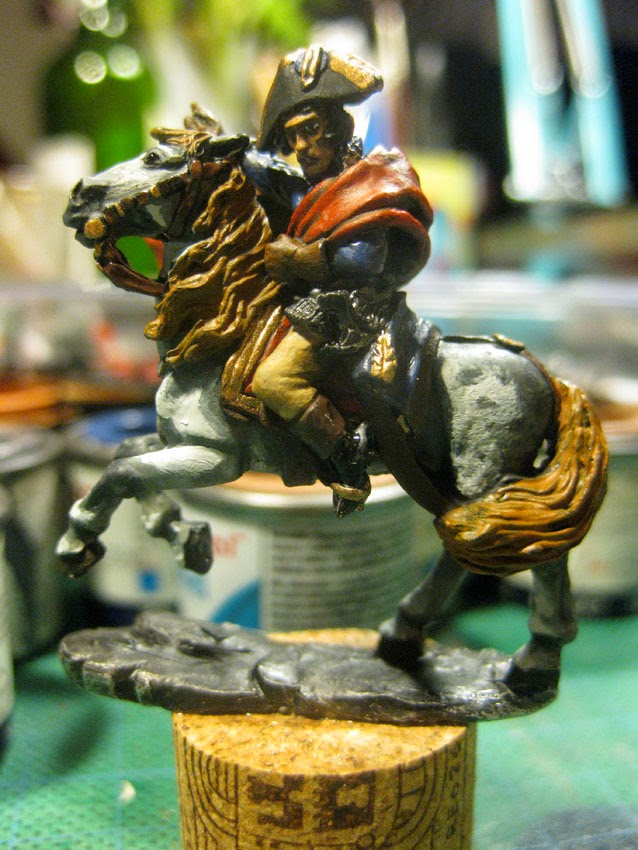 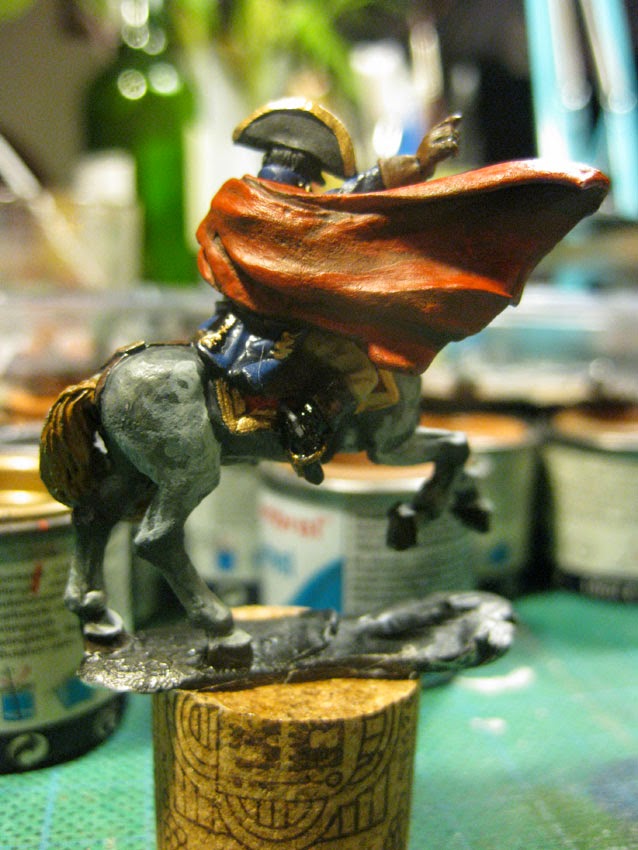 The above pair of pics are lit by a lamp in what I call my overhead 'midday' lighting position. The remainder below are lit with the lamp in what I term a 'late-afternoon/evening' position! 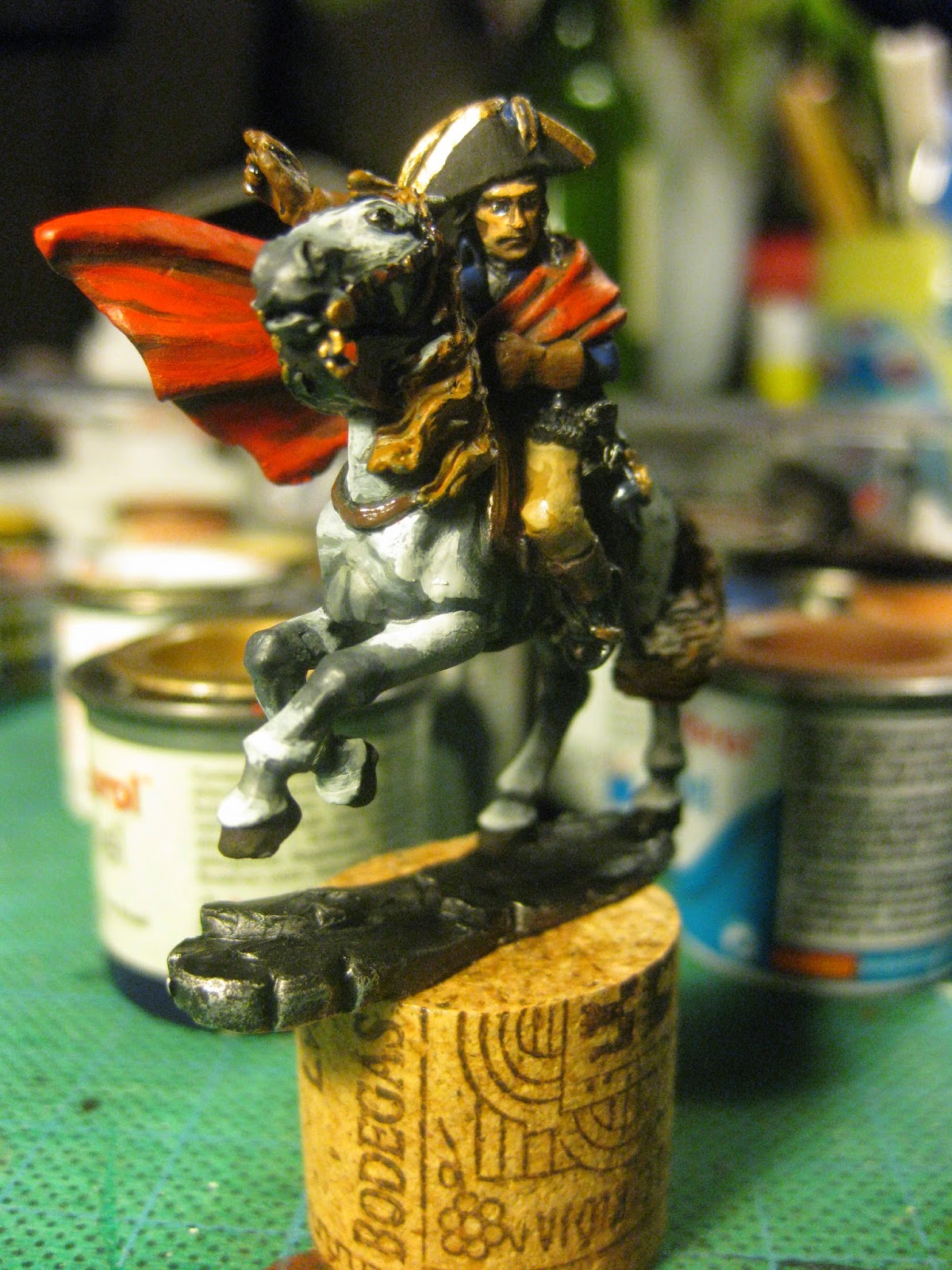 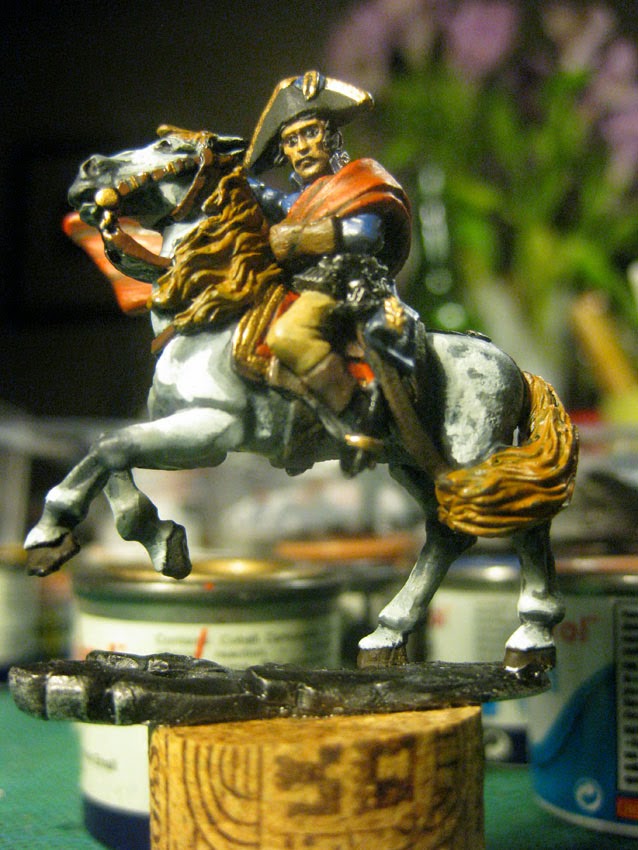 Whatever I or anyobdy else thinks of my painting skills here, I have to doff my bicorne to Alan Perry. I think it's an amazing little figure, full of the vitality that animates the painting. 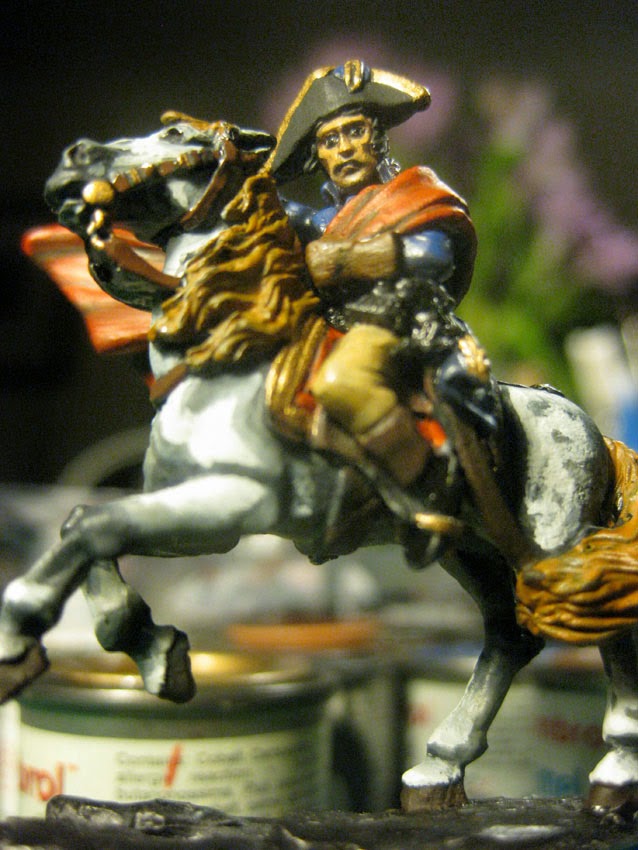 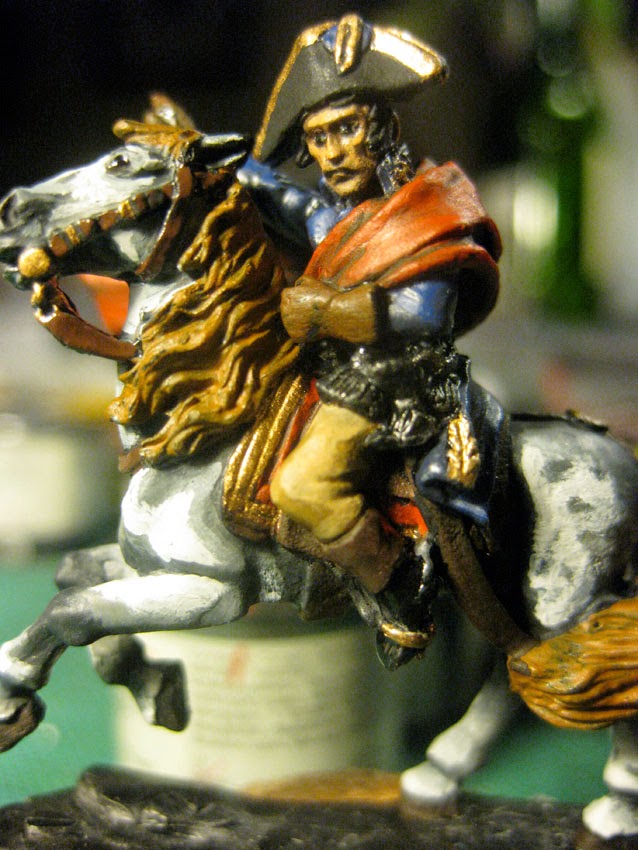 It's interesting to note the differences between the sculpt and the painting. Some are very minor, such as how the sword sits relative the overall pose, whilst others are more major, like the less reared-up pose of the horse, and the fact Boney has both gloves on, whereas in all the David paintings his upraised hand is sans gant. 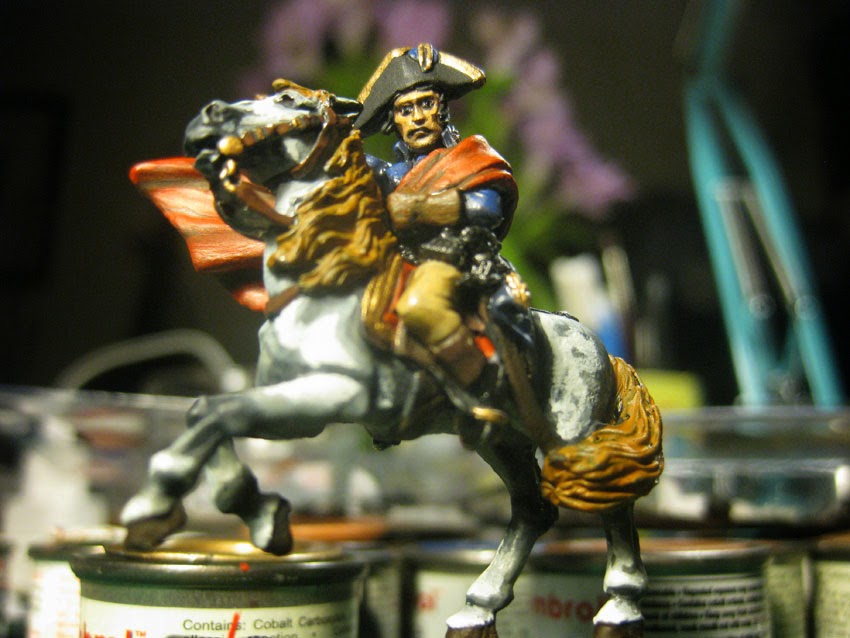 At present I'm building armies for Russia 1812 in 6mm and 12mm, but I like the idea of having 28mm figs for key commanders. This figure would be the first such commander, and they don't come more key than Boney himself! I have a fabulous Murat from Gringo 40s, waiting in the wings.

My rendering of this beautiful Alan Perry miniature is still unfinished, at this moment in time - the gloves, sash and sword all need doing (as well as sundry other little details, plus a bit of general tidying up) - but I'm already quite pleased with it. That's reasonably unusual for me, so I'm doubly happy/chuffed!!

As a footnote: the following pics show how one of the stirrups was incomplete on my casting. I used some superfine white Milliput to make a repair, before undercoating it. This is my first successful conversion (attempts to add plumes to some AB 15mm Polish lancers were abortive!) since resuming the hobby, and I think it's come out okay. 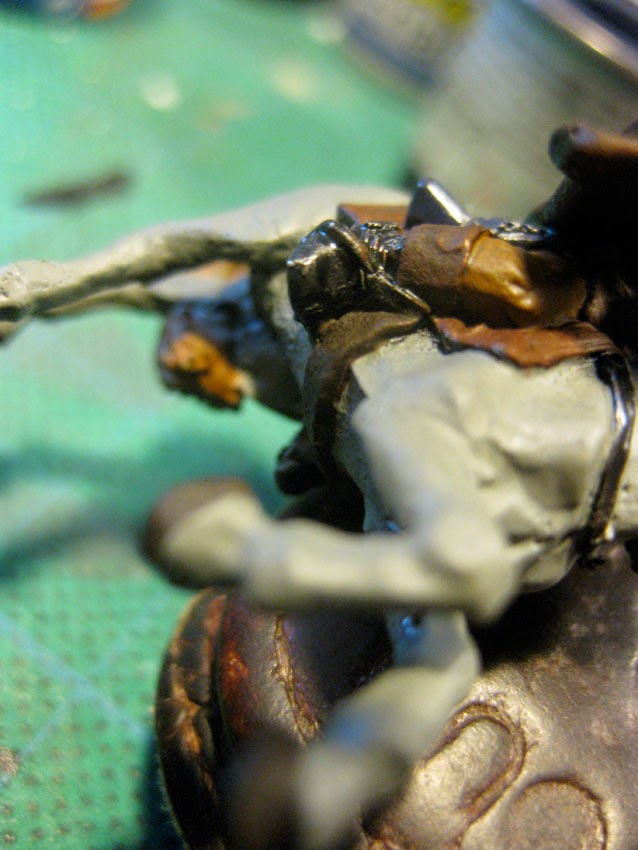 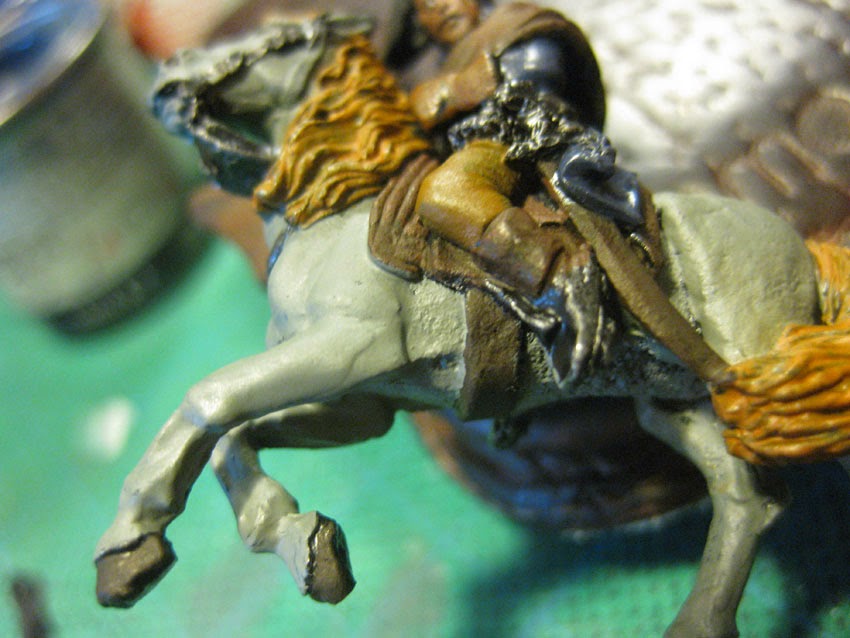 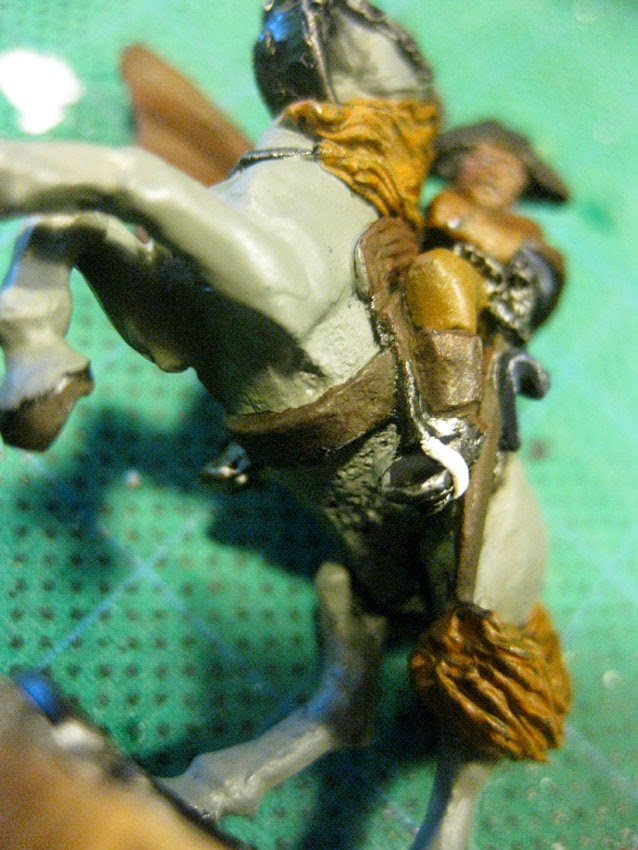 My Milliput repair: does it look a bit clumsy? 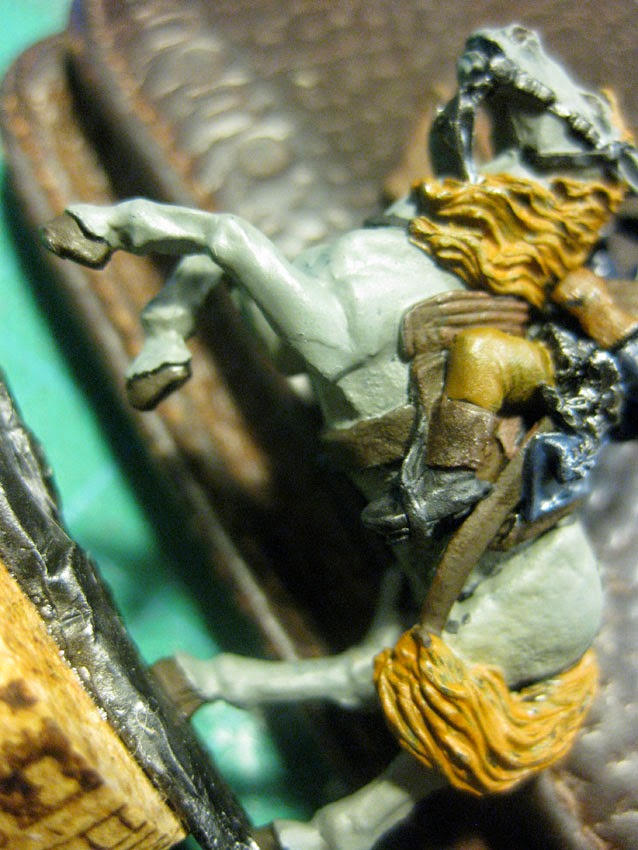 Well... I reckon it looks fine once undercoated.

I managed to squeeze in a little more work on this figure last night. The three pics below show Boney as he stands now, complete except for his gloves, and a little bit of tidying up and some washes to bring out some detail here and there.

I have to say that I feel this is my best paint job to date. I am actually pleased! A lot of the credit has to go to Alan Perry, for sculpting such a beautiful and iconic figurine. 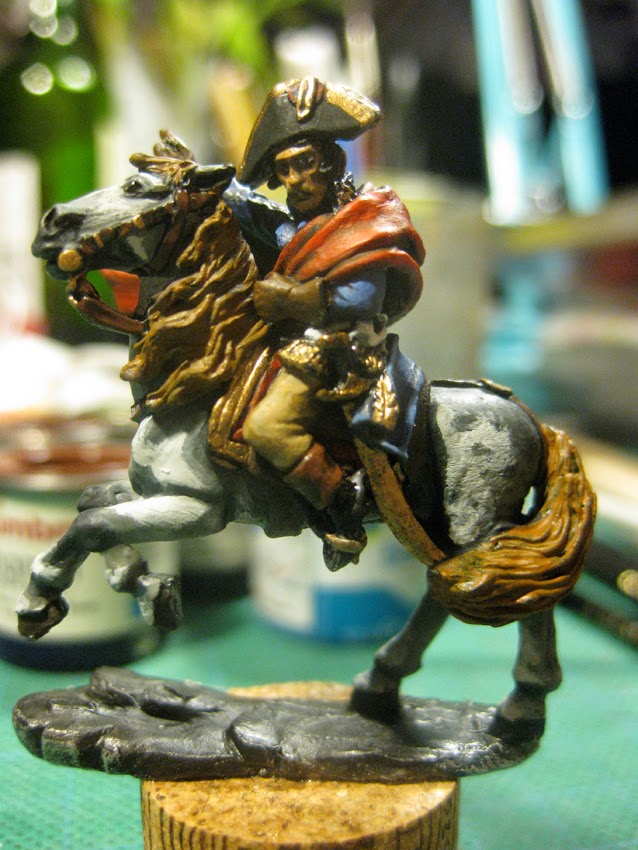 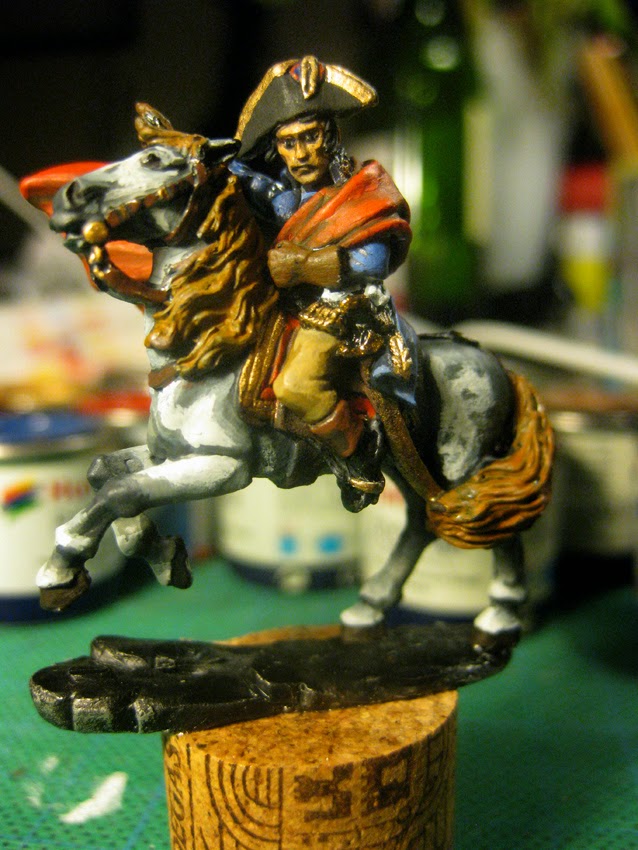 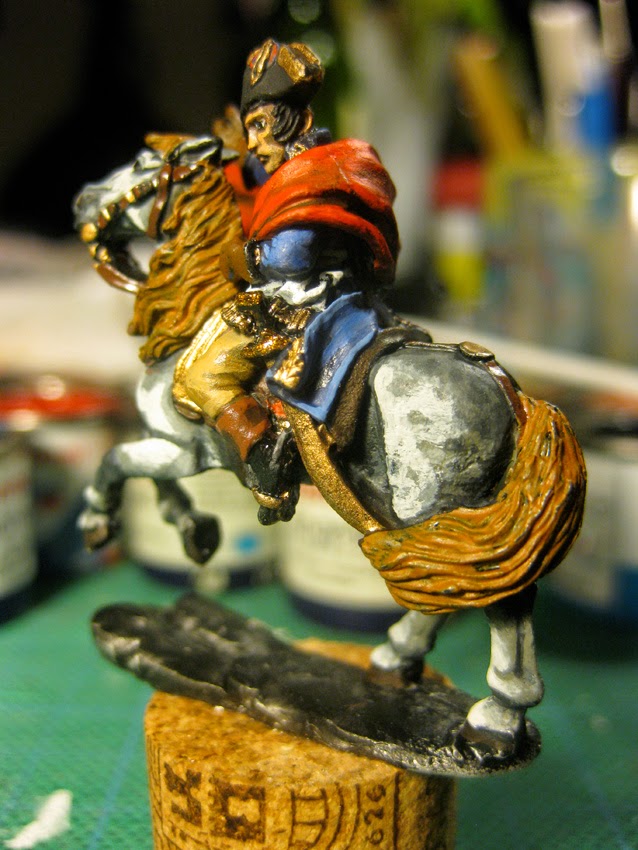 I've more or less followed the Belvedere iteration of David's work, only diverging from his colour scheme in that the horses 'cummerbund' (or whatever it's called: the band under the saddle, going around its belly) is brown in mine, and Napoleon's coat is a lot lighter/bluer. I like the 'tricolor' effect this gives: blue coat, red cape, white sash (and horse... -ish!).

There's a show dedicated to miniature figurines coming up fairly local to me, this coming Saturday, 19th July: Figureworld Model Show, in Oundle, nr. Peterborough. I intend to visit and see what I can do by way of a nice base for Boney.