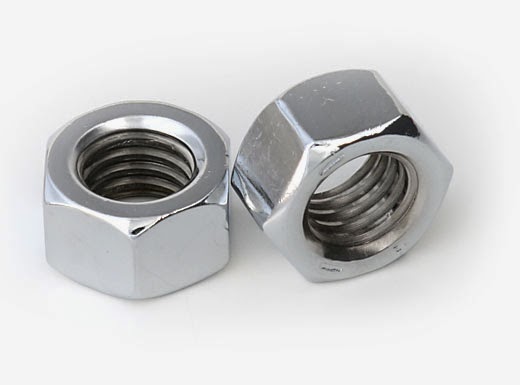 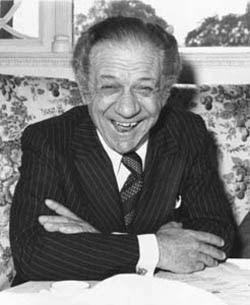 Actually the scenario was far from being funny: as I drove to work yesterday one of my wheels nearly came off the car! A weird rhythmic rattling noise had started a day or two earlier, but was quiet enough and regular enough I though it might just be a stone in the tread of a tyre (something similar happened a short while back, and it turned out to be caused by a metal bolt getting embedded in a tyre).

But this time the noise suddenly started to rather rapidly get much louder within a single short journey: it was warm and sunny, I had the driver's side window half-open, and in addition to the rhythmic clatter, a noise like a flock of angry seagulls was steadily growing. At first I thought it was some kind of avian activity, but as it continued for several miles, growing steadily louder, with hardly a bird in sight -and also altering noticeably whenever I passed any sound-reflecting object like a building - it dawned on me that it was most likely to be the car.

By the time I realised I was the source of this panoply of worrying noises the steering wheel had also started vibrating, gently at first, but quite rapidly turning into a pronounced juddering. The rapid deterioration in drive quality and safety meant I felt I really had to stop and investigate. Upon doing so I discovered that the driver's side front wheel was just about ready to fall off!! Two wheel-nuts - including the locking-nut - were missing, and on one of these the bolt it should attach to was also gorn... shorn right orff!

So I had to call the AA out. As I type this the car remains at the garage, leaving me stranded at home. All of which is not very welcome, from many perspectives. But there has been one upside: instead of spending my day teaching kids how to play drums I got to spend it painting more of the lead pile. What I'll be doing with the rest of the day depends upon the garage. I'm just glad I wasn't bombing along the M11, as I would normally have been doing later today.
Anyway, enough of potential near-death events. Let's get on to something far more serious and important: tiny little soldiers!


I love these little fellows: they -  Adler 6mm Napoleonic French ADCs - came as a bag of 10 figures, six in the late-style shako (not ideal for my 1812 russian scenarios) and four in busbies. During painting I dropped the stick they're all glued to, and one of the plumes snapped off of a gent sporting a busby (I felt very lucky not to have trashed the whole bunch more comprehensively!). Can you guess which one? 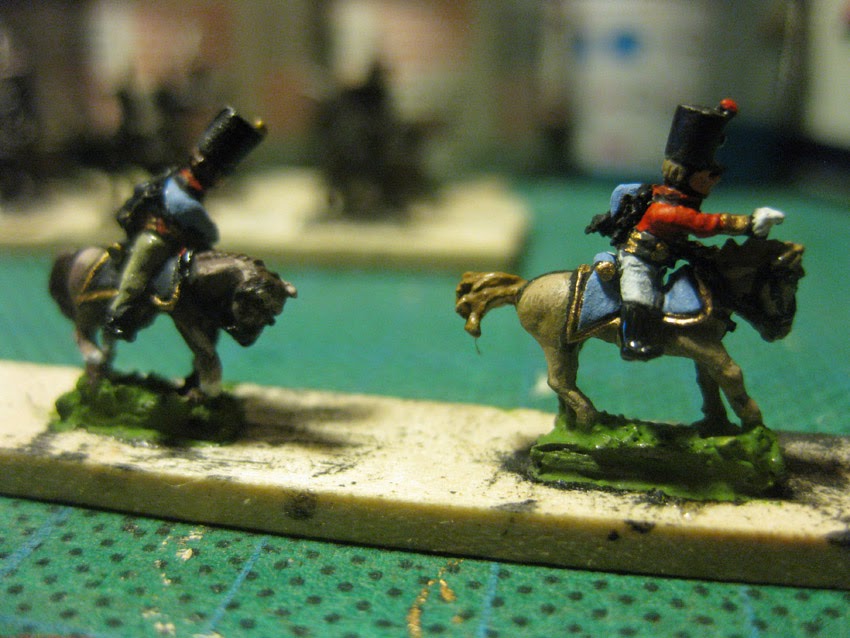 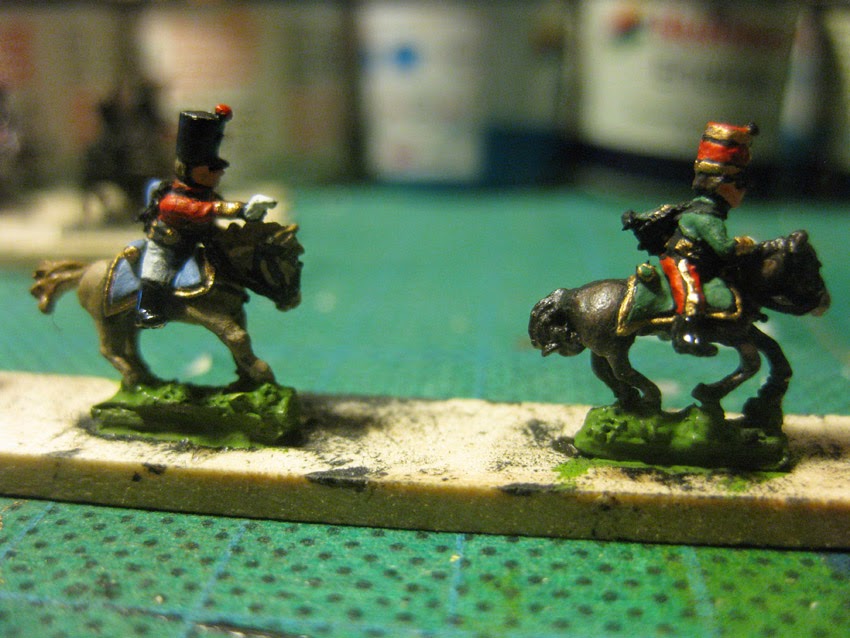 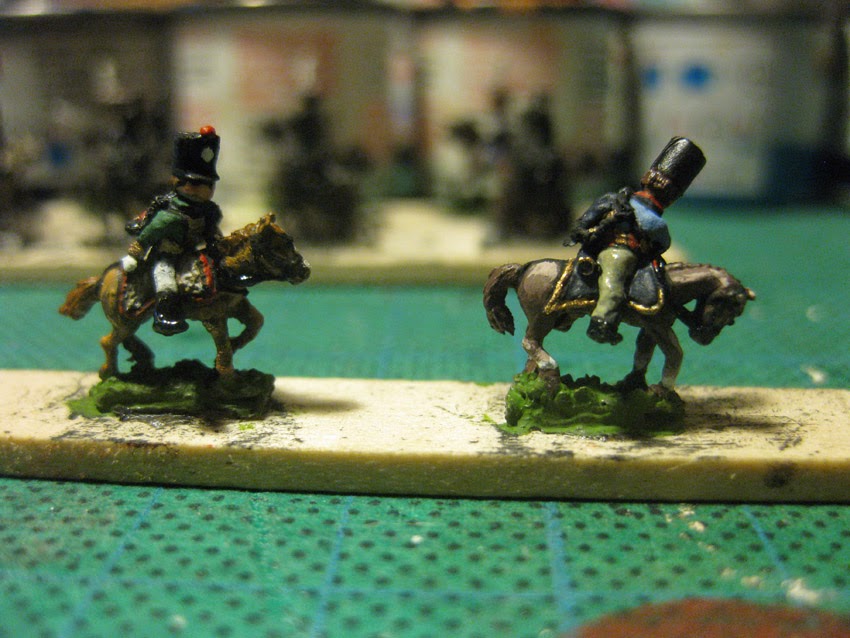 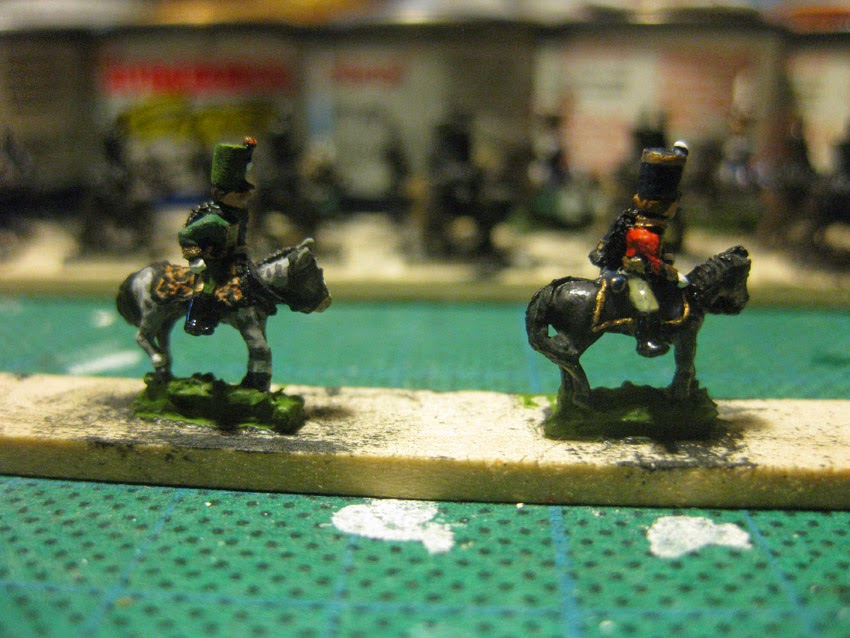 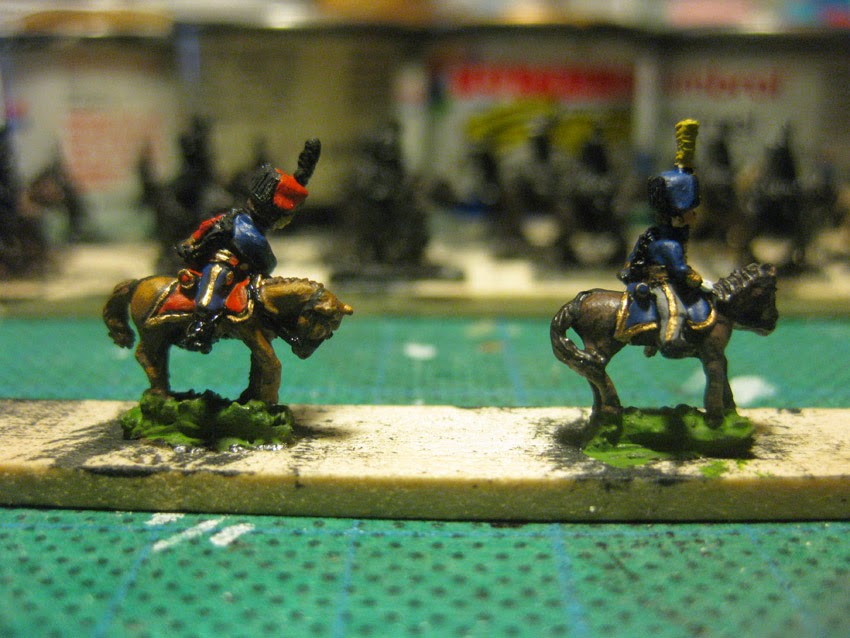 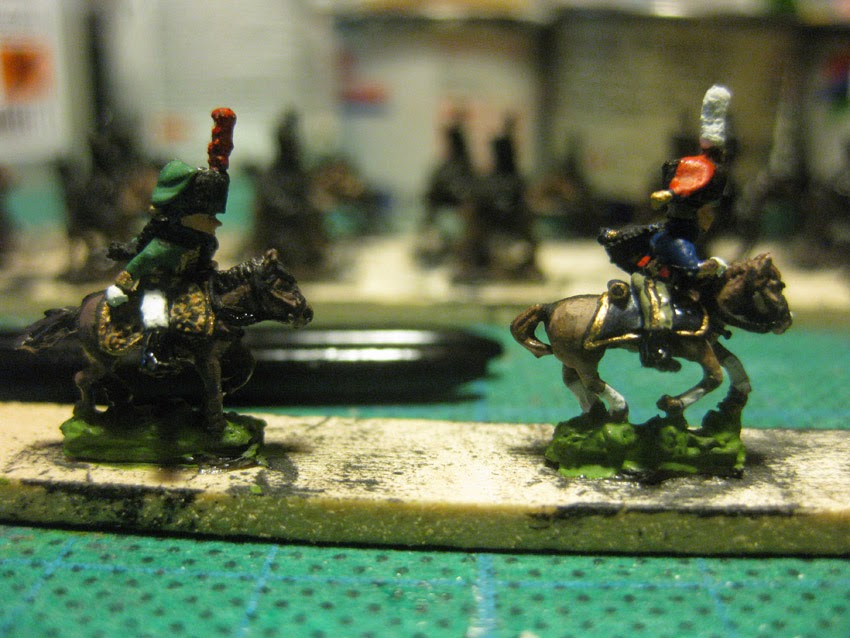 I started these Aide-de-Camps on Tuesday, and photographed them Wednesday. Like all of my painted 6mm figs, they're not 100% finished, or based. One thing I'm holding off on at present is a final wash, to bring out any fine detail. I've dabbled with white-spirit thinned enamels (and even used them a bit on these in places), plus I have a tin of Army Painter 'Quickshade', which I've tried on a few larger scale figures. But I'm not entirely happy with either, results wise. Any suggestions?


The above pics show these little dandies from their right hand side, whilst the following are shot from their left. 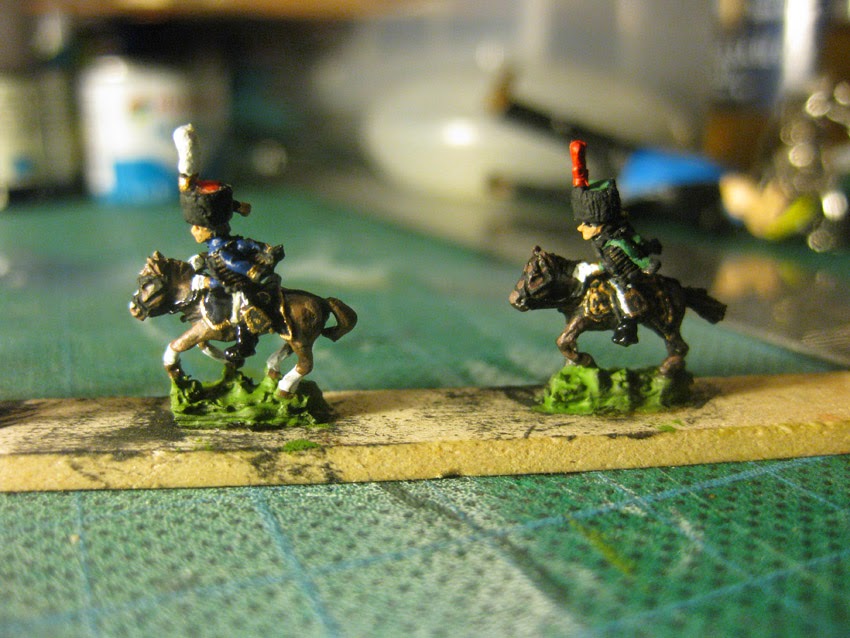 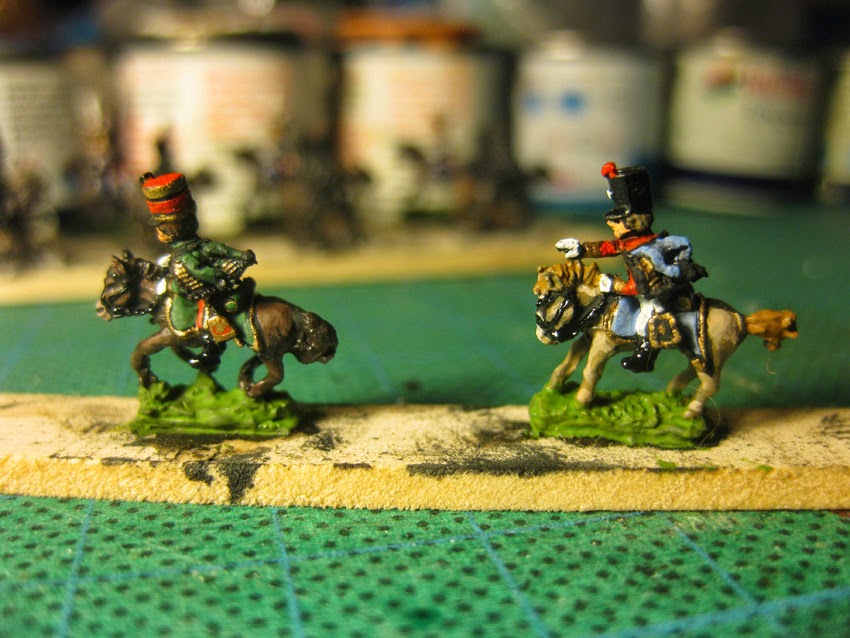 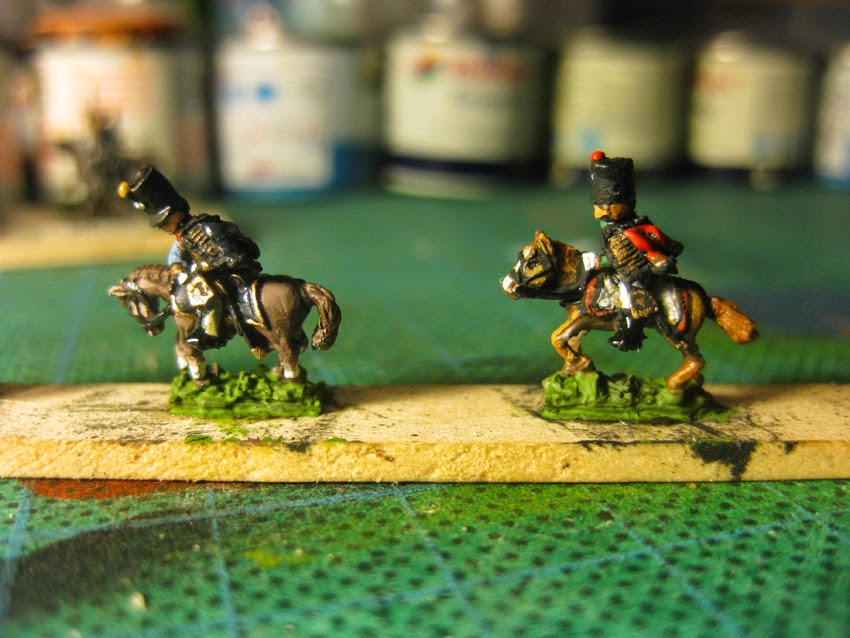 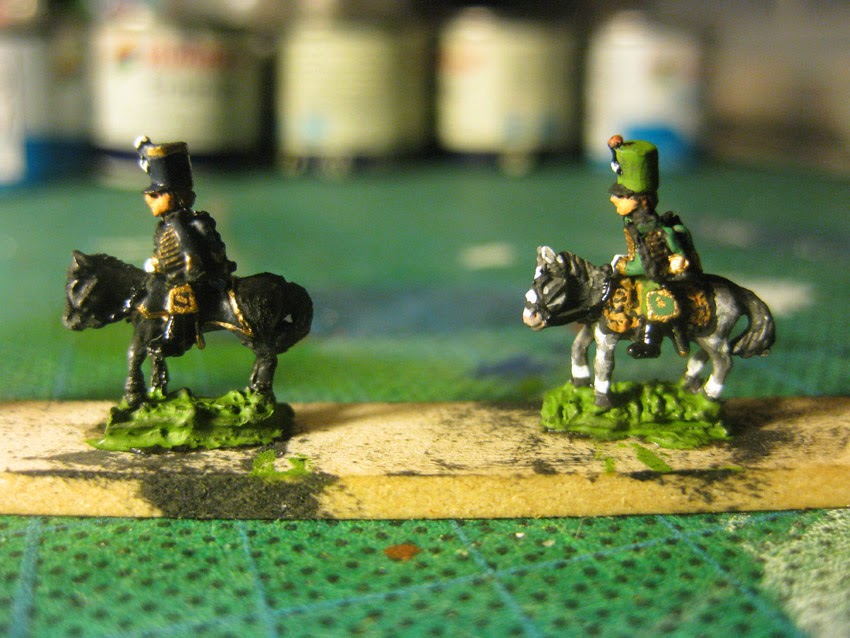 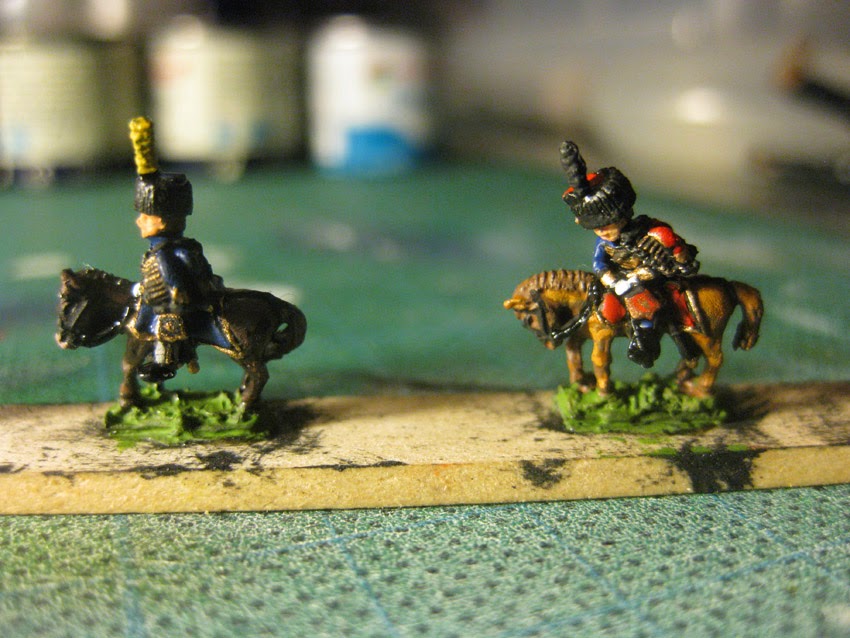 At some point fairly soon I guess I'll also have to decide how to base the ever-growing ranks of painted troops... Hmm!?


I like to photograph my figures under different lighting conditions: I usually start with the light directly above them, a kind of electric midday, if you will; then I like to take some more pics lit from a lower angle, with a more late-afternoon/evening feel! 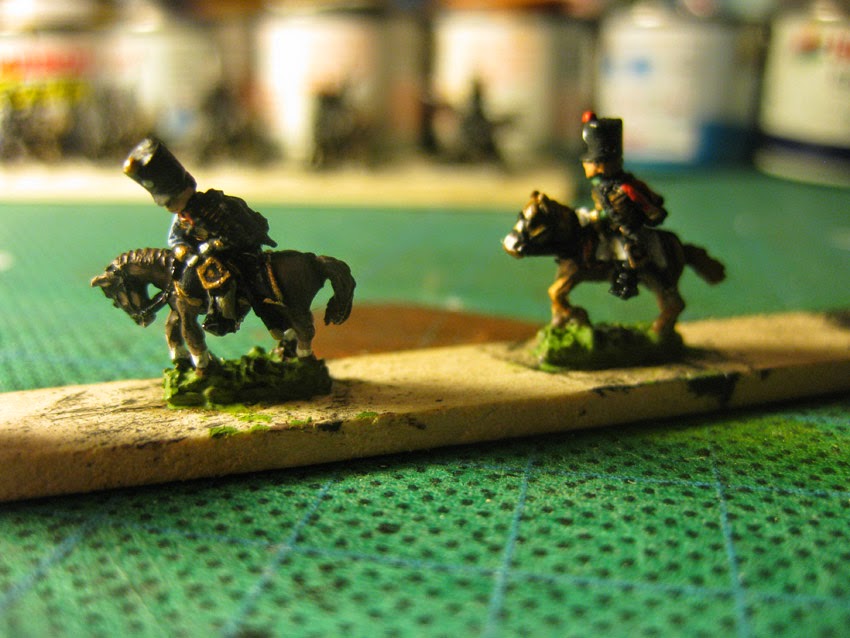 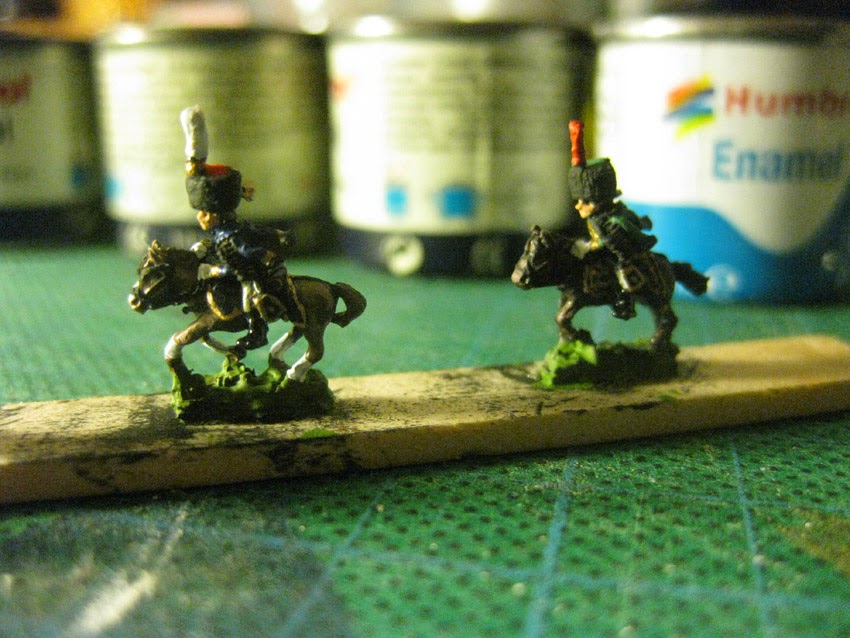 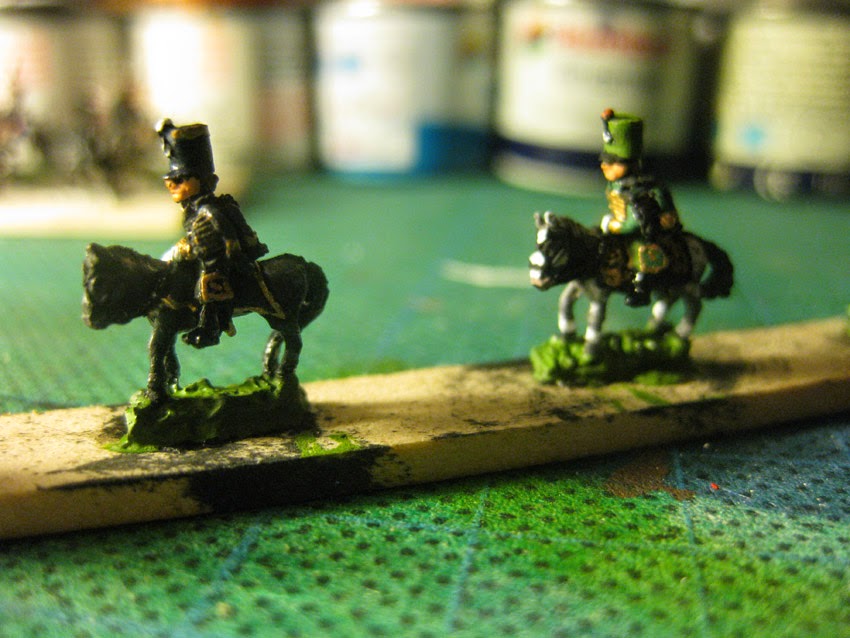 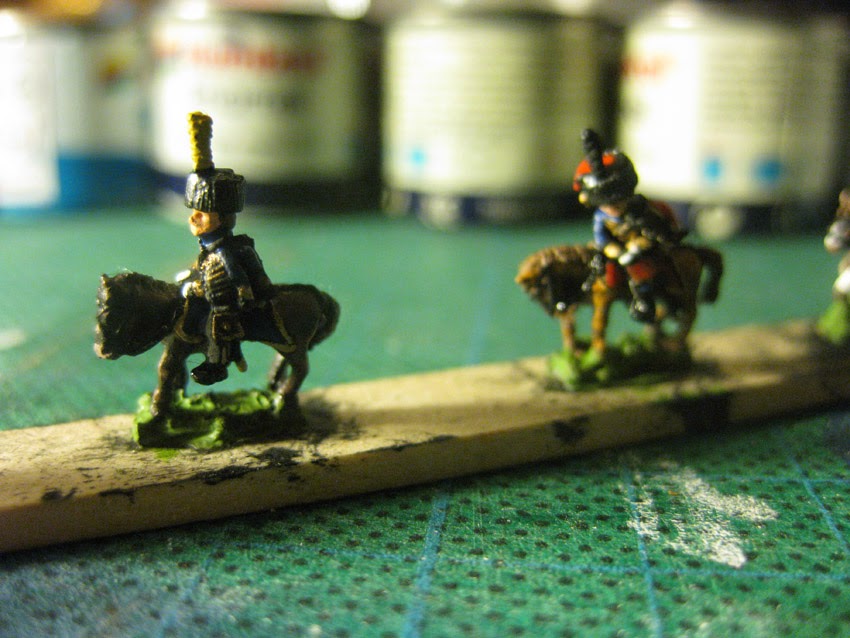 As usual I used all my available books as uniform ref. Didn't bother with the net this time.

The Funckens were particularly useful during these painting sessions, as they have several pages showing multiple mounted ADCs. Very helpful! Rousselot's ADCs are, by comparison, a rather dull lot. I didn't stick rigidly to copying any of them, as such, but just used the reference material as a guide.

Practically all material that deals in any depth with the topic of Napoleonic uniform-ology is agreed that things could be quite confusing, what with constant changes to regulations, the whims and foibles of those paying for and providing the uniforms (which would I expect be especially true of such dashing young blades as these ADCs), and then the rigours of life on campaign. 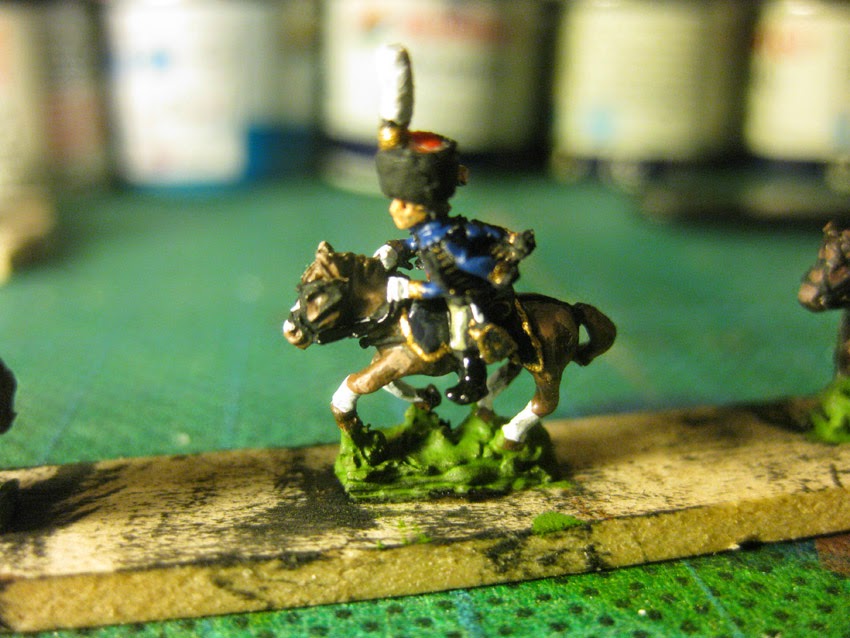 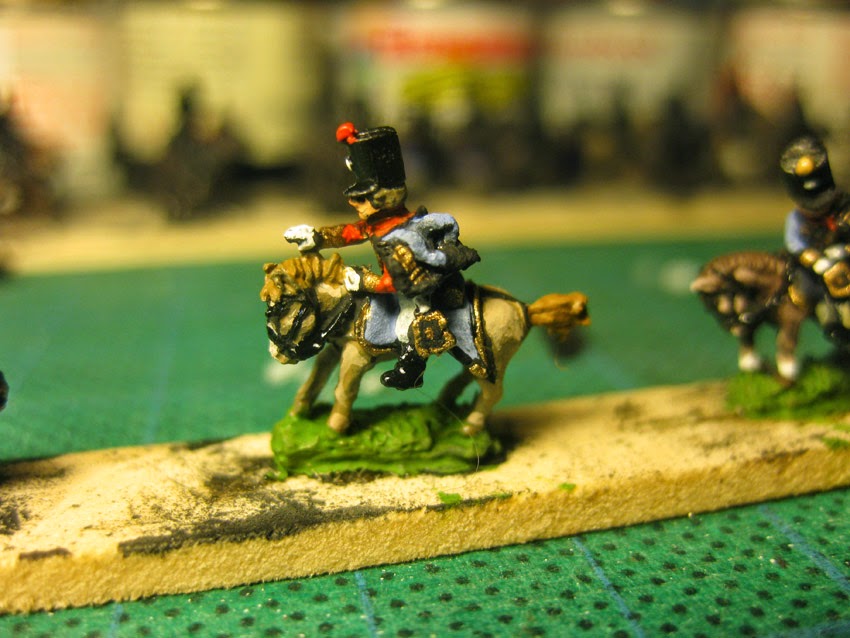 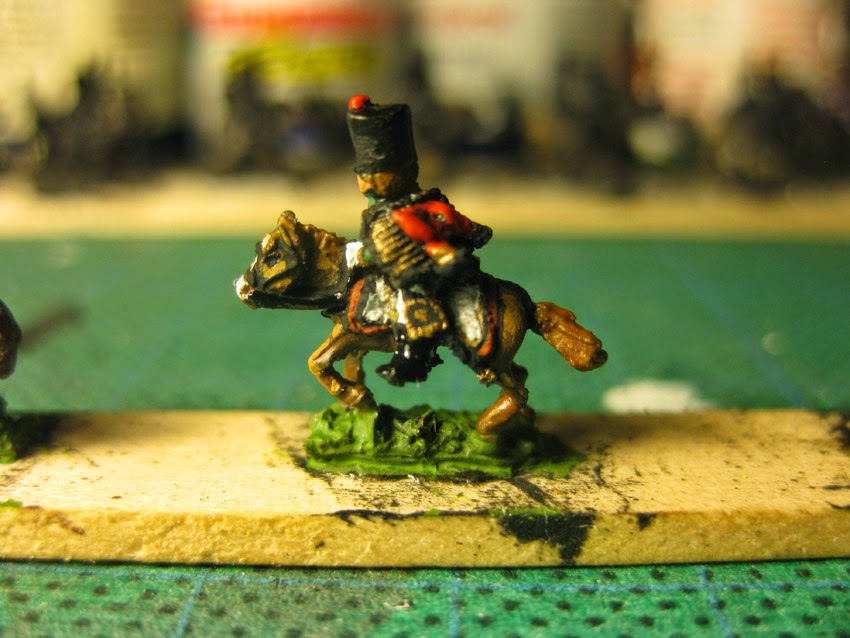 Essentially these are all dressed as hussars, although their rank and privileges allowed them to jazz up the basics a fair deal. I do love the uniforms of the French hussars, they are the epitome of Napoleonic grandeur and swagger. Who could resist?

If you find this kind of get-up seduces your eye, you should check out Ridley Scott's feature film debut, The Duellists, in which Harvey Keitel and Keith Carradine portray the historical characters Lieutenant Gabriel Feraud (of the French 7th Hussars) and Lieutenant Armand d'Hubert (ADC to Brigadier-General Treillard), who did actually become locked into a protracted period of duelling, as depicted in the film. 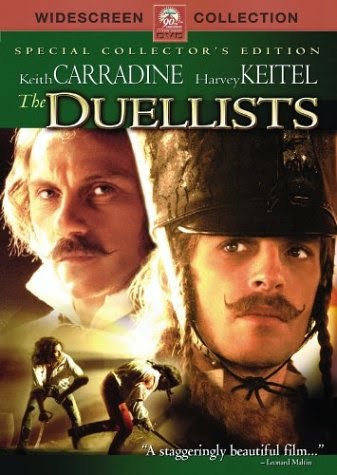 The DVD cover of the version I have.

The film is kind of odd in some ways, and I may go into that more at some other time. One of the oddities is the contrast between the effort and expense lavished on the very convincing uniforms and the fact that Carradine and Keitel make no effort to modulate their strong American accents! When you get plummy English Frenchmen talking to sassy Noo Yoik or laid back Californy Frenchmen, it does feel a trifle weird. 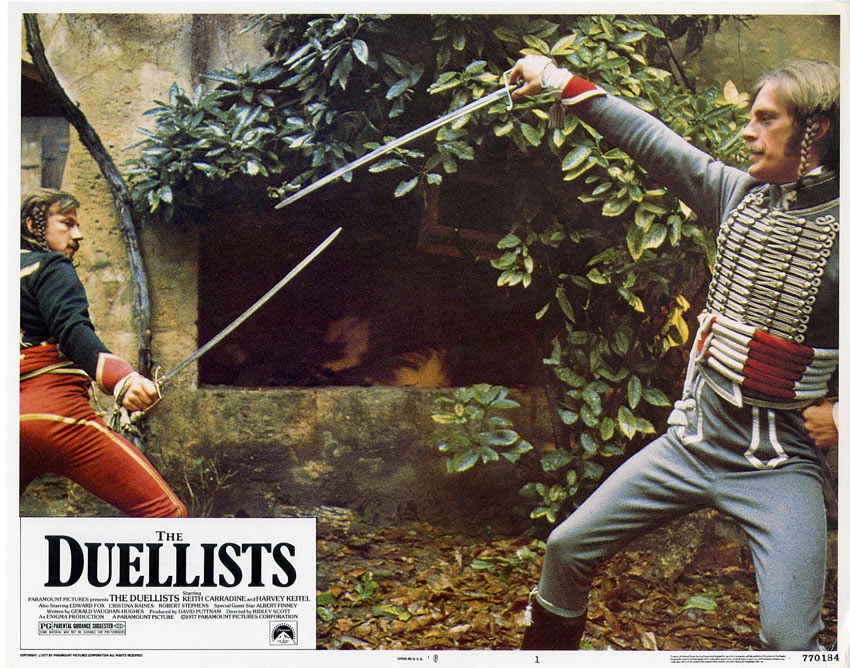 A rare pause in the action wherein Keitel is not actually attempting to kill Carradine. 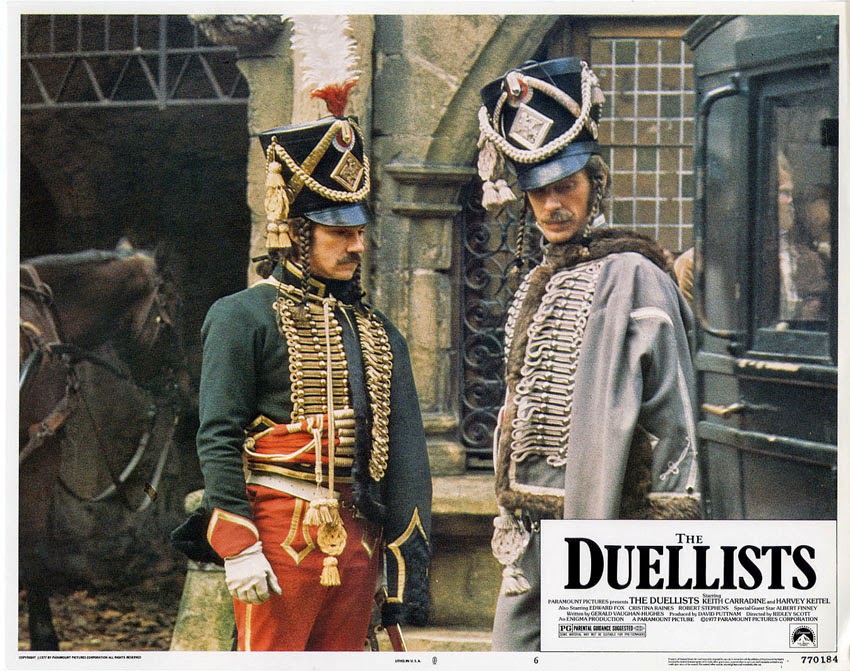 These two publicity shot show the uniforms nicely, but the film itself is very, very beautifully shot, and much more atmospheric than these images suggest. These photos, which undoubtedly have a charm of their own, actually look rather 'technicolour', or perhaps even hand-tinted!?)