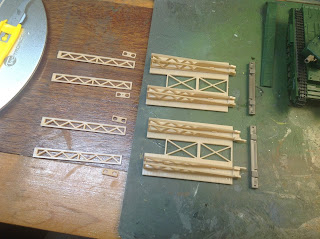 The instructions for this venerable aulde Matchbox model start with assembling the bridge. I saved this part for after I'd made the tank. It's a rather lovely thing! You need to pay attention at this stage, as the components are quite siecifjc in how they go together. 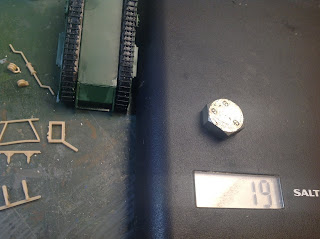 Oops! I forgot to add a weight to the inner rear of the tank.


Having assembled the bridge, whilst casting my eye over the instructions I spotted an important step in the construction of the tank that I'd omitted; adding a counterweight, so the attached bridge won't topple the model forwards!

I used a hacksaw to remove the head of a latte heavy hex-headed bolt. I then had to bar God the resulting nut bybreming about 1mm from opposite sides, so it'd fit in the very narrow Churchill tank body. As ur forgotten to do thus at the construction stage, it meant I had to perform fairly drastic surgery to the rear underside of the rank body to get the weight in.

The instructions called for 20g of weight. Miraculously that's exactly what the nut weighed initially. It lost a gram in the process of dancing the two sides, winding up weighing 19 grams. I superglued it into the base of the tank, and 'stitched' the patient back up with surgical glue! 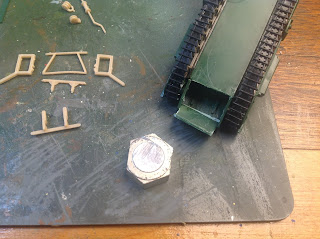 The nut part of a large bolt, sawn off by hand. 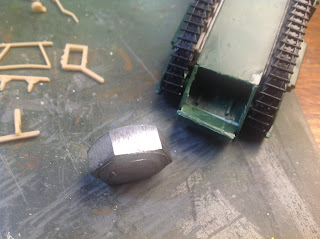 It also required a small amount of narrowing to fit... 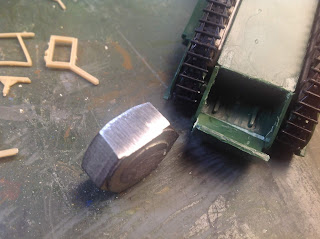 ... on two opposite facets. 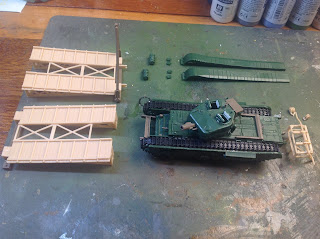 
By end of play last night I had all the kit assembled, bar actually attaching the bridge. Oh, and the mudguards (are these what Americans call the fenders?). The winch assembly is a fun thing to assemble. Fiddly but satisfying!

I may be mad. And/or it may prove impossible. But I have a yen to build the bridge in such a way that it actually folds, so it can be shown both stowed and deployed. Hence saving this part of this build to the end. I'll need to fabricate some mini-moving joints! 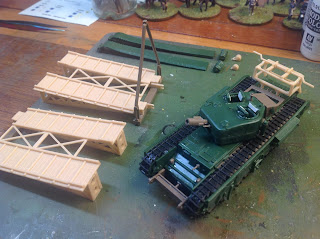 So, that's it for part two of this very enjoyable build. Today is friday, the tubal teaching day of this half-term. Once the work's out of the way, I can return to the conundrum of building the bridge. I also need to source some crew figures, to populate my now open-hatched vehicle. What fun!
Posted by Seb Palmer at 07:00